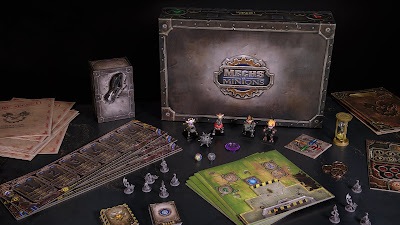 Mechs vs Minions is a brand new board game by Riot Games, the creators of the massively popular League of Legends MOBA PC game. In this game players work together to complete various missions, while attempting to fend of waves of minions. I've never played League of Legends, but the concept of the game had me interested from the first day I heard about the game, and I knew I had to try and get my hands on it.

Its first wave of shipping, which was 15,000 units strong, sold out in less than a day. While its second shipping wave, which is scheduled to ship out in December, is still available for purchase on Riot's merch store as of this writing.

After a stressful day of attempting to order it on launch day, while dealing with server issues caused by  thousands of other gamers attempting to do the same, as well as a week of anxious waiting. Mechs vs Minions has finally arrived at my door, in all its 15 lbs of glory. I now have pictures of everything taken and am here to do a full unboxing of the game.

Now, before we get started, Mechs vs Minions features a Legacy style system and new content is unlocked as you play. There are certain aspects of the game which are meant to be revealed as the game is played and remain secret until then. These range from new cards, scenarios and a boss mech that is sealed in his own box. By now, I'm sure those spoilers are all over the internet. But to keep the mystery alive for myself, at least a little, I haven't cracked open the dossiers or the boss mech's box. If you want to see that stuff, Watch it Played has done an excellent series of videos on the game and you can see it all on there.

With that out of the way, lets dig into this box!

Read more »
Posted by Scott Ferguson at 1:56 PM
Email ThisBlogThis!Share to TwitterShare to FacebookShare to Pinterest 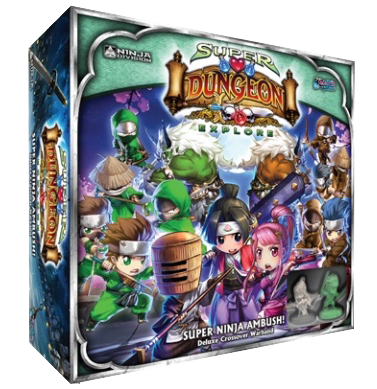 I've finally been able to get my hands on a copy of the new expansion for Super Dungeon Explore, the crossover set Super Ninja Ambush!

If you didn't already know, back during the Ninja All-Stars Kickstarter, Ninja Division added in some bonus cards that would allow players to add in Ninja All-Stars models into their Super Dungeon Explore games. The aptly named Ninja Pack was a simple pack of cards for use in Classic and Arcade Mode of Super Dungeon Explore and brought a new paired spawning point to the game.

It was a nice addition, and I love variety as much as the next gamer. But from a collector's stand point, I didn't like the idea of mixing components or breaking down part of the Ninja All-Stars rewards to use them exclusively for games of SDE. I also had a problem with the idea that a Super Dungeon Explore focused gamer, that is a completionist would need to buy an entire game that they may not be interested in just to finish off their collection. I also may have been vocal about it whenever Ninja Division posted polls asking about future crossovers.

Luckily all this was solved with the announcement of Super Ninja Ambush!

Not only does this box set give you everything you need to run two sets of paired spawning points worth of ninja models (the original Ninja Pack only included enough cards for a single paired spawning point), but you end up doing so fairly reasonably too, without the need to buy into Ninja All-Stars if you don't want to.

Also, it acts as a dual purpose release for Ninja All-Stars, in that it is an official release of the Earth and Wind shrine ninja. Before this release, the only way to get them was if you were a Kickstarter backer. Plus, a person could use these models for league play at their local shop, without having to buy into Ninja All-Stars fully.