I've used a lot of different brushes over the 20 some years I've been painting these little metal and plastic soldiers. I started with that cheapo white handled brush that comes with Testors paint sets, moved up to value pack brushes and then to craft store art section brushes. But until earlier this year, I'd never bought a "high end" paint brush.

Well, after dealing with brush issues in the early part of this year and replacing them seemingly every month or so, I finally broke down and bought a set of Raphael 8404 Kolinsky brushes from Dick Blick's web store.

I've been using these brushes since mid-April, so I think now is as good a time as any to share my thoughts on them.

Read more »
Posted by Scott Ferguson at 3:22 PM
Email ThisBlogThis!Share to TwitterShare to FacebookShare to Pinterest 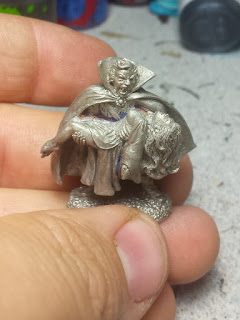 Read more »
Posted by Scott Ferguson at 12:00 AM
Email ThisBlogThis!Share to TwitterShare to FacebookShare to Pinterest

The commission of Halaster Blackcloak and Sangalor is now all done! I really enjoyed painting these guys, partly because I am a huge D&D nerd and partly because Illithids are my favorite D&D monster race. I did have a few issues with them, mainly in the details of Halaster, but for the most part I liked working with them.

It's a pretty well known fact in my gaming group that I am not a fan of resin. But these models didn't have many issues with small parts that would easily break off or with bubbles in the casting. The issues I had with Halaster stemmed from his hair and beard. They seemed to have a lot of flashing in between the strands of hair and it was a pain to clean up.

These models were painted up for one of the owners of the game shop that my board gaming group meets up at on the weekends. He asked that I follow the official color schemes pretty closely, but that he wanted them to end up in my style of painting. He also didn't care if the beholder in the set was painted, since the person he is gifting these to didn't care for the beholder mini.

Anyway. Lets get to the pretty painted models!

Read more »
Posted by Scott Ferguson at 8:33 AM
Email ThisBlogThis!Share to TwitterShare to FacebookShare to Pinterest

Ninja All-Stars Ronin Shojo is all finished! Finished being painted, anyway. She still needs her market stall, but I'm still looking for pieces parts for that. Til then, I pinned her back to her base and am calling her done - for now.

Read more »
Posted by Scott Ferguson at 9:45 AM
Email ThisBlogThis!Share to TwitterShare to FacebookShare to Pinterest 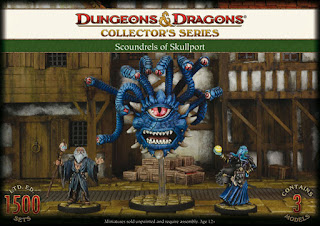 Another new commission! This time it's for the owner of the gaming shop I go to every weekend. For this one I am painting up Halaster Blackcloak and Sangalor from the Scoundrels of Skullport limited edition Dungeons and Dragons Collector's Series box set. The box also includes the beholder, Xanathar, but I'm not painting that one up.

The goal is to paint them up in the same color scheme as the models on the box, but in my style of painting. So far, I've gotten Halaster all  painted except for the base and Sangalor has his base coats down.

Read more »
Posted by Scott Ferguson at 8:49 AM
Email ThisBlogThis!Share to TwitterShare to FacebookShare to Pinterest

The Cryx Deathripper is now all finished, except for the basing which will be done when all the models are painted. He turned out really nice and evil looking too and everyone in my Warmahordes group really liked it.