I've dialed back the miniature painting a little bit this week, the plan is to slow down the work load and take a bit of a break from painting as much. I've been painting non-stop since before Adepticon and have finished almost an entire army in the time since.

I'm not going to stop completely, but as of now the plan is to paint on Monday nights, and do other things in my free time for a bit.

This week, I painted and finished two models. One was a new commander for the Steel Legion, while the other was a Chaplain in Terminator Armor.

Let's check them out!

Read more »
Posted by Scott Ferguson at 4:08 PM
Email ThisBlogThis!Share to TwitterShare to FacebookShare to Pinterest

This week was all about getting the Valkyrie finished. I feels like I've been working on this thing for ages (even though it's only been about a week).

This baby is covered in freehand and fanciness.

Let's check it out.

Read more »
Posted by Scott Ferguson at 3:57 PM
Email ThisBlogThis!Share to TwitterShare to FacebookShare to Pinterest 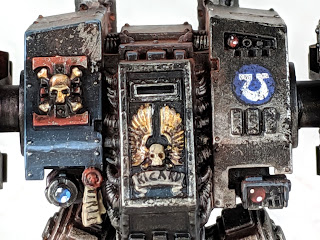 If you're unfortunate enough to need to be interred in a dreadnought chassis, and can't manage to find a relic Deredeo chassis to get stuck in, your next best option for your artillery loving self is a Mortis Dreadnought.

This fella was a fun project, as it let me do a tiny bit of converting and I played around with some freehand after he was finished. He was originally the fastest dreadnought I painted, and probably still is even after the freehand was done.

I'd say he's up there on my list of favorite models in my army.

Let's check him out.

Read more »
Posted by Scott Ferguson at 2:44 PM
Email ThisBlogThis!Share to TwitterShare to FacebookShare to Pinterest

It's been a busy week around here! It feels like I didn't do a lot this week, but in actuality I did!

This week I painted the last Chimera, the Veteran squad's Platoon Commander and started on a Valkyrie. I also went to a pottery shop and we painted ceramics, where I painted up a cute little panda bear.

Read more »
Posted by Scott Ferguson at 2:16 PM
Email ThisBlogThis!Share to TwitterShare to FacebookShare to Pinterest 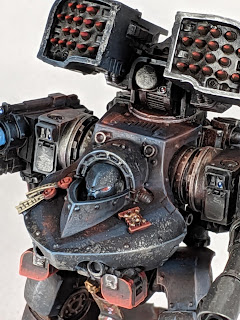 If you're a space marine with a taste for artillery and are severely wounded, look no further than getting yourself interred in a Deredeo Dreadnought.

I mean look at this bad boy, heavy support never had it so good.

Dual Lascannons and a Missile Pod, plus some Storm Bolters for good measure. Mm Hmmmm, tasty.

Read more »
Posted by Scott Ferguson at 11:14 AM
Email ThisBlogThis!Share to TwitterShare to FacebookShare to Pinterest

While I didn't get much hobby time in this week, because of Jeep and house repairs, I did manage a few things. This week, I painted a second Chimera and assembled another one. I also built a new Platoon Commander to go along with my Veterans.

Let's check it out!

Read more »
Posted by Scott Ferguson at 7:26 PM
Email ThisBlogThis!Share to TwitterShare to FacebookShare to Pinterest 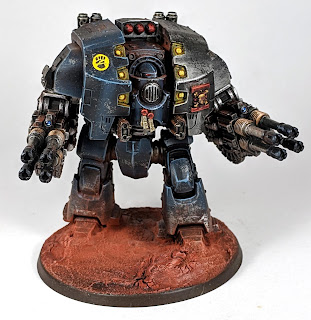 Read more »
Posted by Scott Ferguson at 6:45 PM
Email ThisBlogThis!Share to TwitterShare to FacebookShare to Pinterest

The Legion continues to grow. This week I worked on just one squad of Death Korps of Krieg Engineers. I'll be using them as Veterans in my Steel Legion army and they will be played as paratroopers and supporting my main force with Valkyries.

Other than that, on Monday night I started building a new terrain piece, based off of a sketch I made of a small two story house.

Let's check it out!