February is over and Adepticon is now less than a month away and the pressure is on!

I am now on to the last 4 Kastelan Robots. So that means from here on out its all robos all the time. Over the last week I've managed to finish one and get a decent amount of progress on the next one too. Also I finished the vats in a mad dash to get them done before the tournament on Saturday.

Read more »
Posted by Scott Ferguson at 1:08 PM
Email ThisBlogThis!Share to TwitterShare to FacebookShare to Pinterest

We recently started a new Dungeons and Dragons 3.5 campaign and that means, a new character!

Usually in D&D I like playing rogues or rangers and stealthy types. But I wanted to try something different and went with a caster class, the sorcerer.

Since I'm usually a rogue player I like small races and went with a Ghostwise Halfling for my race choice. Unfortunatly, finding a suitable halfling miniature for a caster is no fun at all. You can find gnomes all day long, but more halflings look like either knock-off Bilbo Baggins or are rogues.

With that in mind, I looked at gnome miniatures instead and found the miniature that I was looking for.

Read more »
Posted by Scott Ferguson at 12:27 AM
Email ThisBlogThis!Share to TwitterShare to FacebookShare to Pinterest

February is nearly over already and my local Warhammer 40k group is having a tournament this weekend, and I desperately needed to get the Sydonian Dragoon finished for it.

I'm happy to report that I have finished it and also started on my objective markers.

Let's take a look at what has happened over the passed week!

Read more »
Posted by Scott Ferguson at 12:29 PM
Email ThisBlogThis!Share to TwitterShare to FacebookShare to Pinterest 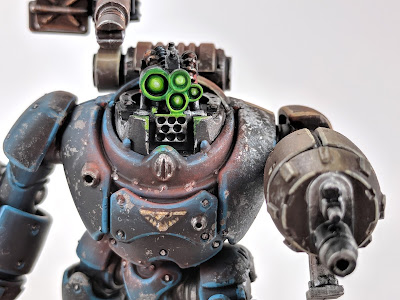 Kastelan Robots are probably my favorite model in the Adeptus Mechanicus line of Warhammer 40,000 models. They're big stompy bots, which aren't cyborgs and need to be controlled by a handler in order to operate on the battlefield.

They also are very old, in 40k terms, older than the Imperium of Man. That gave me plenty of ideas to go with.

For my army, I knew that I wanted to have the robots in diffferent colors than the green that is seen across the rest of my army. The idea being that these guys collect robos and use parts from other fallen robots to rebuild two downed robos into one operational robo.

The first of many Kastelan Robots, this guy was my test run on painting them as much as he was also my first one for my army. His eyes were also the subject of my tutorial on painting glowing eyes.

Read more »
Posted by Scott Ferguson at 12:03 AM
Email ThisBlogThis!Share to TwitterShare to FacebookShare to Pinterest

The brushes of progress continue to paint and in the past week I've managed to finish the Skitarii Vanguard squad, start on the actual model for the next Sydonian Dragoon, build another Robo and more terrain, including an update to the Tech-Priest Dominus.

Its been a busy week, let's take a look!

Read more »
Posted by Scott Ferguson at 4:16 PM
Email ThisBlogThis!Share to TwitterShare to FacebookShare to Pinterest

This week for Miniature Monday, we are going to take a break from Adeptus Mechanicus models and show off something from last year that I totally forgot to post about.

Today going to show you Huckleberry, from Rail Raiders Infinite, who is based on Doc Holiday of Tombstone and the legendary old west tales of Wyatt Earp.

Rail Raiders Infinite is a train heist board game by Ninja Division where players take the role of an outlaw attempting to make off with more double dollars than anyone else. It features a bunch of chibi styled western characters, many of whom are parodies of famous TV and anime characters.

Read more »
Posted by Scott Ferguson at 12:00 AM
Email ThisBlogThis!Share to TwitterShare to FacebookShare to Pinterest

Hey everybody, welcome to Wizardry in Progress!

This week we continue on with Adeptus Mechanicus models in a push to complete them in time for Adepticon. But I also have a bit of terrain to talk about as well, which is quickly becoming a new addiction.

Read more »
Posted by Scott Ferguson at 9:17 AM
Email ThisBlogThis!Share to TwitterShare to FacebookShare to Pinterest

With all of my Kastelan Robots, I knew that I wanted to have at least one Cybernetica Datasmith with them, so I can change their protocols in game, without having to rely on command point usage and getting them stuck in a protocol for the remainder of the game.

I also knew that I wanted to make my character minis a bit more unique than the official ones, and with that in mind I went to work customizing him.