It's been 21 months since Relic Knights funded and the product is finally being shipped out to customers! And now, a year and a month after the estimated ship date, I now have my pledge rewards in hand! This is an exciting day, for sure. Especially since it's in time for my birthday! This reminds me of last year and Reaper's Bones KS rewards arriving around the same time. Once again, I couldn't afford to buy myself anything special for my birthday, like I usually would. But I'll take this as a suitable replacement!

I got the notification email and the tracking number on Monday morning and couldn't have been more hyped. The day of Relic Knights was finally arriving. I was surprised that the shipper said that the box weighed in at 12 lbs, I guess I didn't realize how much plastic was in there. I guess I shouldn't be surprised. The Bone's box was about the same weight, if I remember and there were a ton more figures in that box. 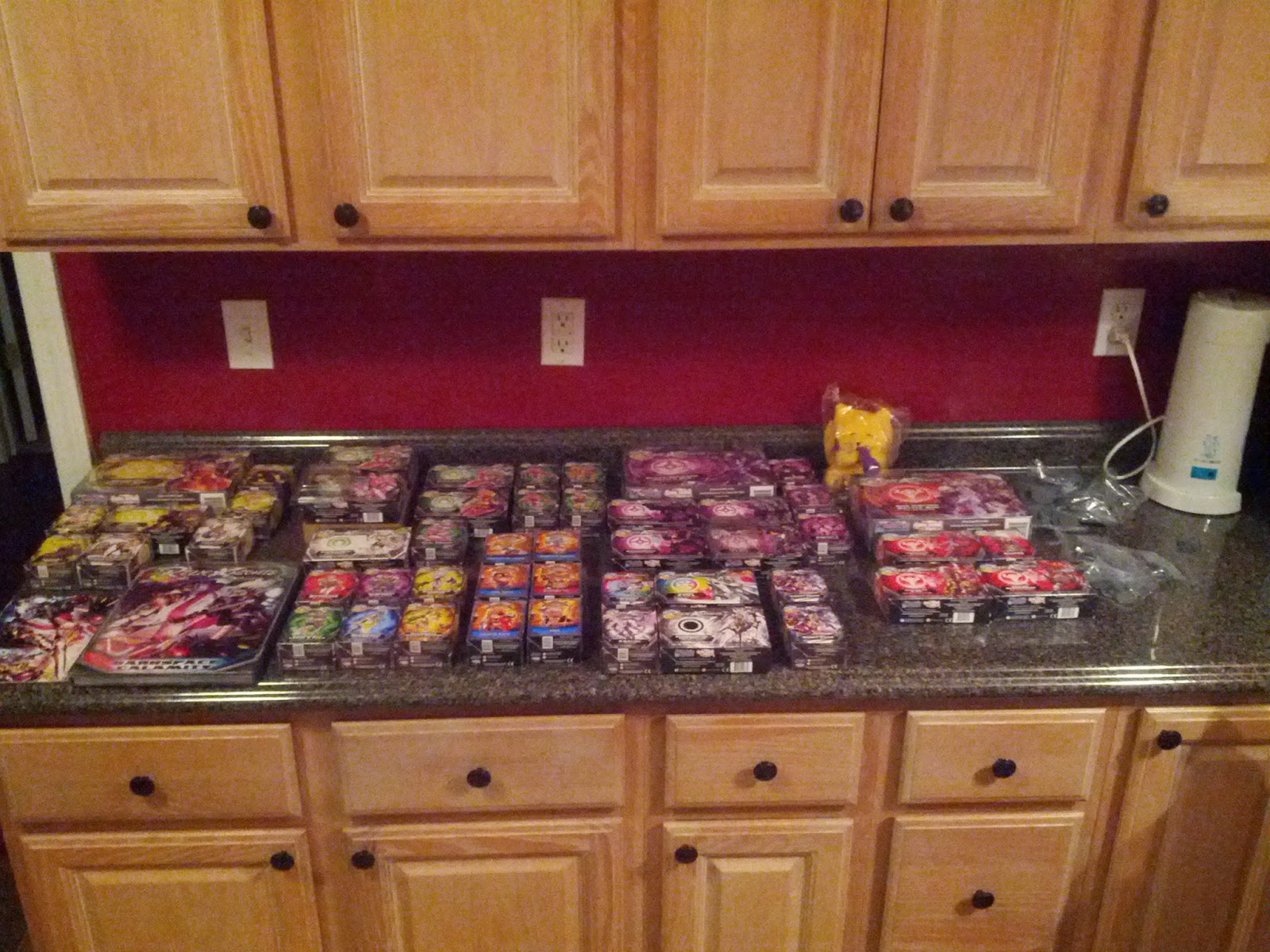 Like I had said previously, I went in for 3 complete factions and 1 extra with just the bonus conent. The 3 Factions I went with were Black Diamond, Cerci Speed Circuit, and Doctrine. These three groups I went in for every bonus available in order to get me a bunch of options. The final group I went with was the Noh Empire, with the plan to pick up the bonus stuff at retail instead. It was a tough choice, but it was something I had to do in order to get all the Darkspace and Super Dungeon Explore figures too. 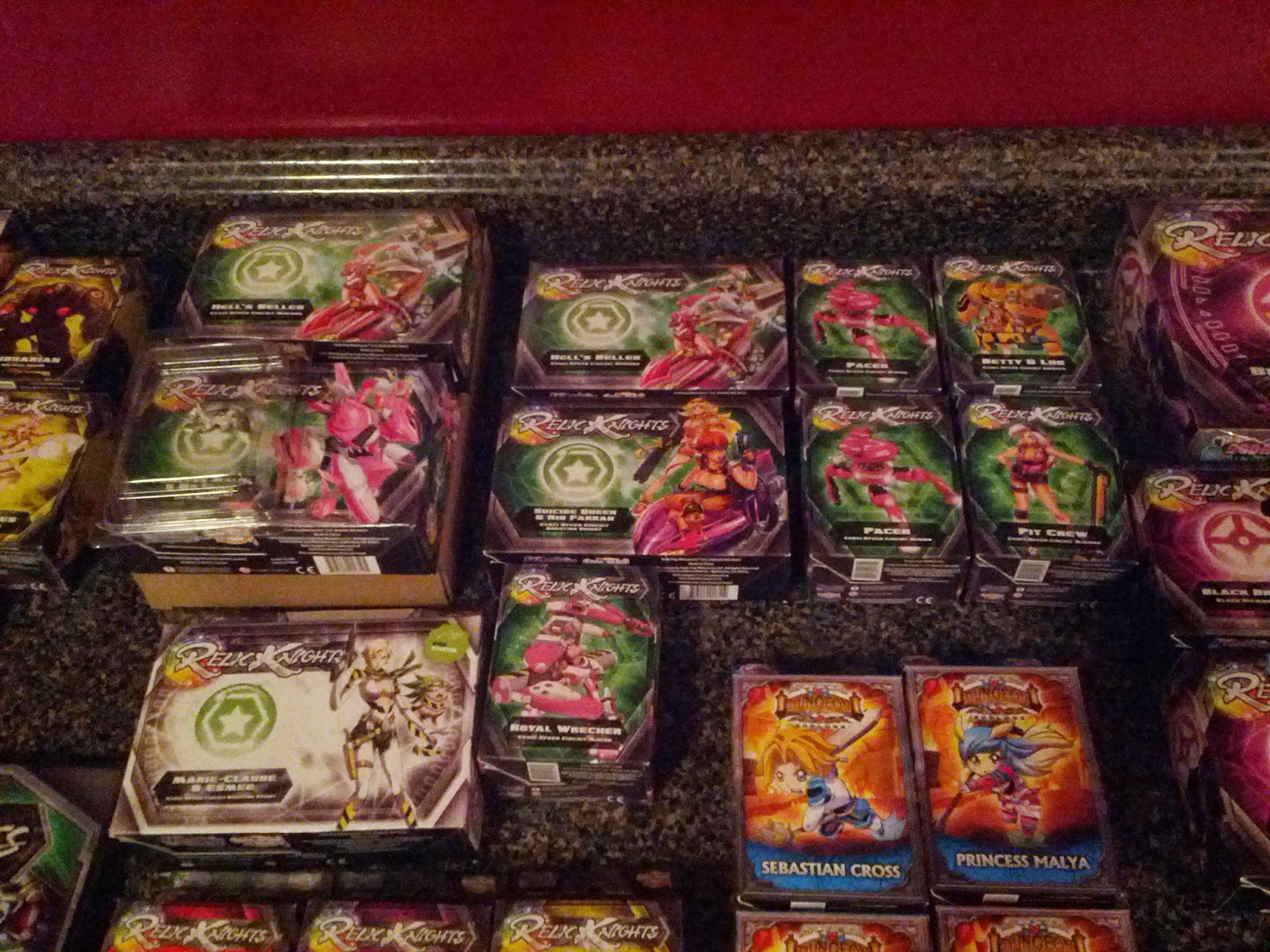 Here's a breakdown of everything I had ordered.
Gameplay stuffs
1 Hardcover Rulebook
2 Sets of Boost tokens 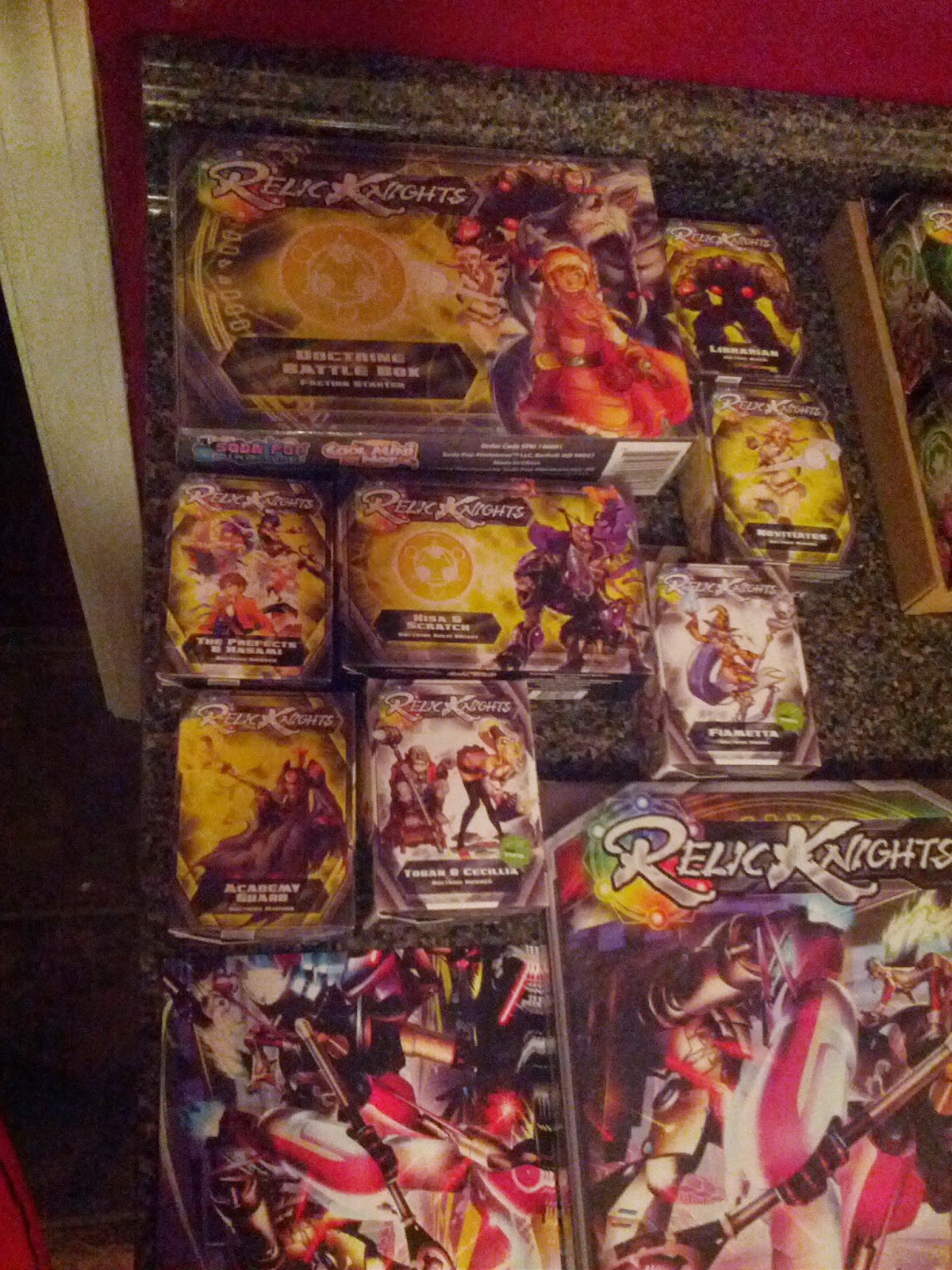 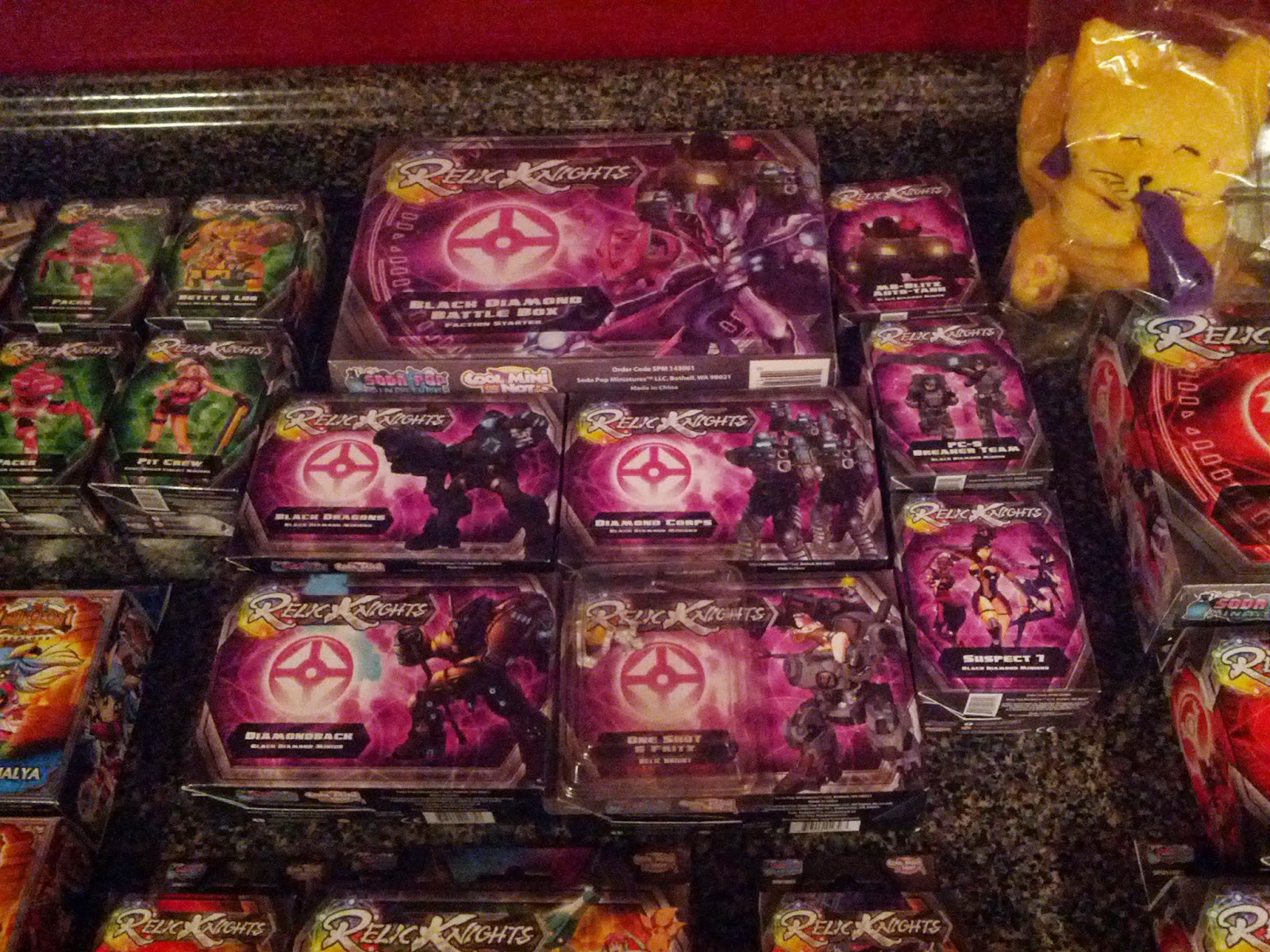 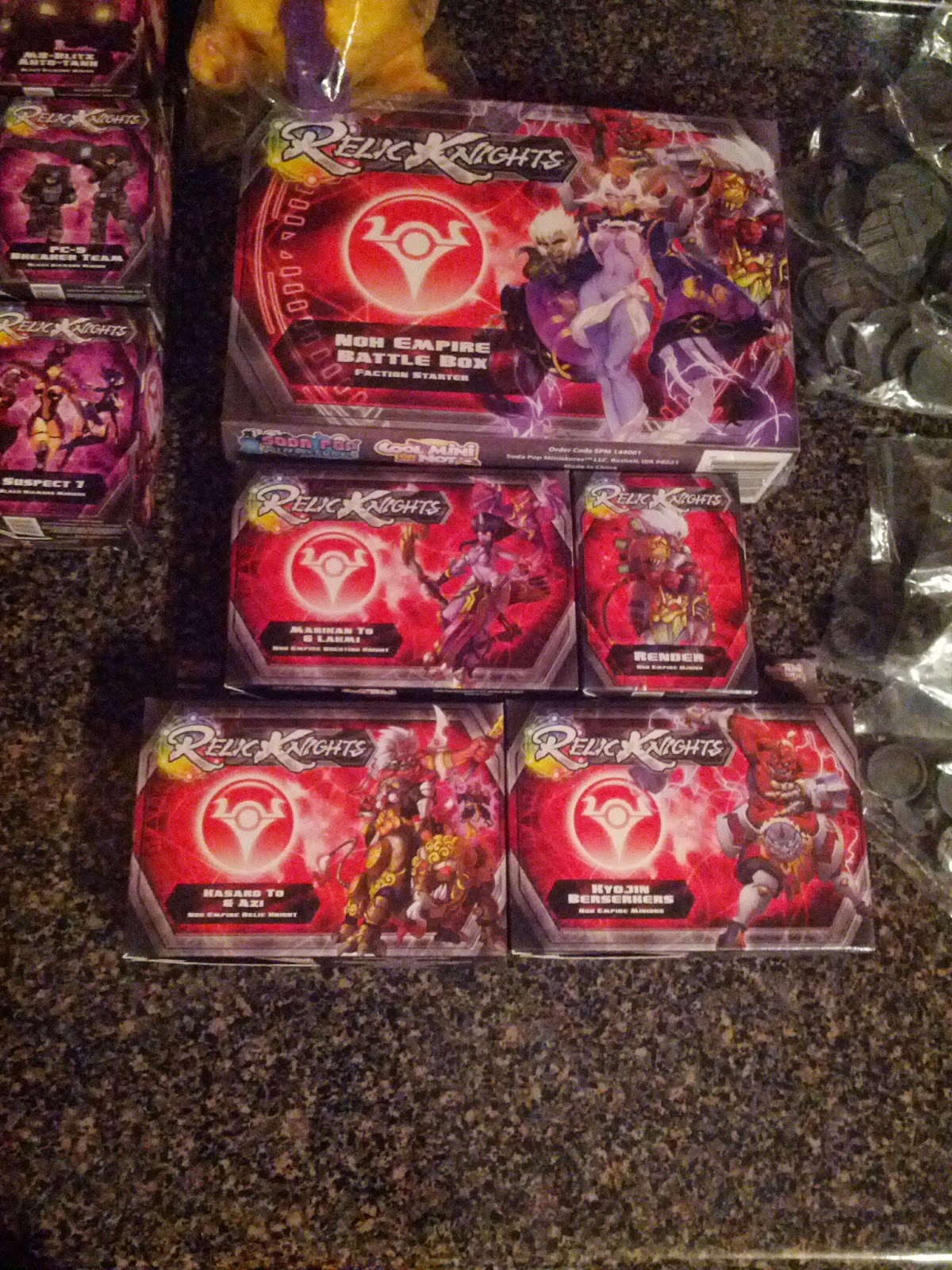 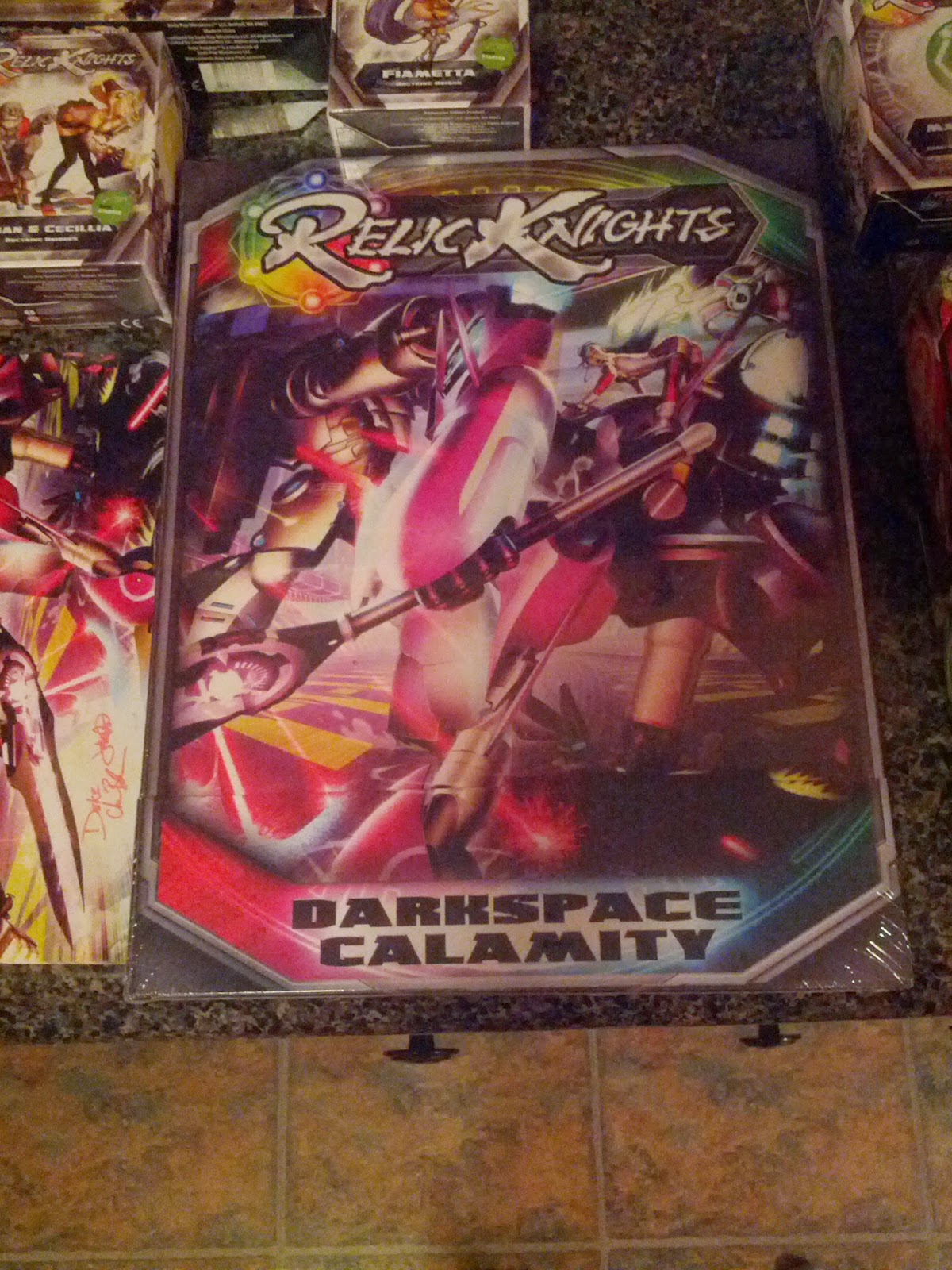 I haven't had a chance to look at the minis themselves. But I did pick up the 1 Rulebook I kept and it's very nice. It feels solid and the pages don't feel cheap, all the artwork looks really good and it was wrapped in plastic, keeping it safe from damage in shipping. Plus it has that new book smell of freshly printed ink, I miss that smell from my days working with lithography. I'm going to need to read this baby cover to cover for sure. 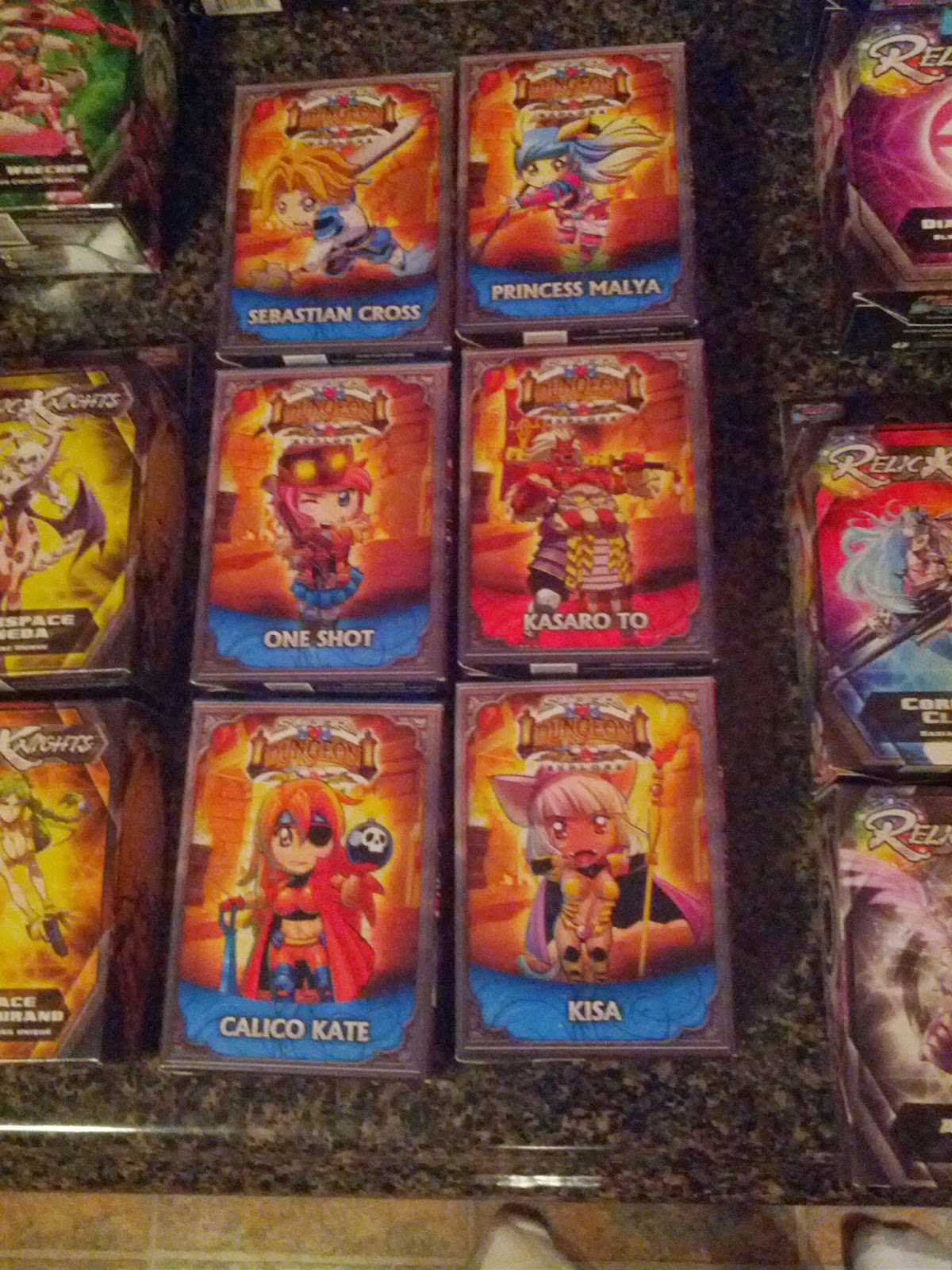 It's funny, originally before Relic Knights, I had never heard of Super Dungeon  Explore. During the KS I looked into it and picked up the base set for SDE and got hooked on it. In the time since the KS ended, Super Dungeon Explore is the game I've invested the most in, since my Magic: The Gathering days... I've since collected every figure available, except King Starfire, and backed the Forgotten King expansion 100%. I wouldn't say that I've been waiting for Relic Knights to ship, just so I could get my hands on the SDE Heroes. But what with the Forgotten King wrapping up and me being back into painting the game, the hype train is rolling full steam. So yeah... Bring on those new characters! 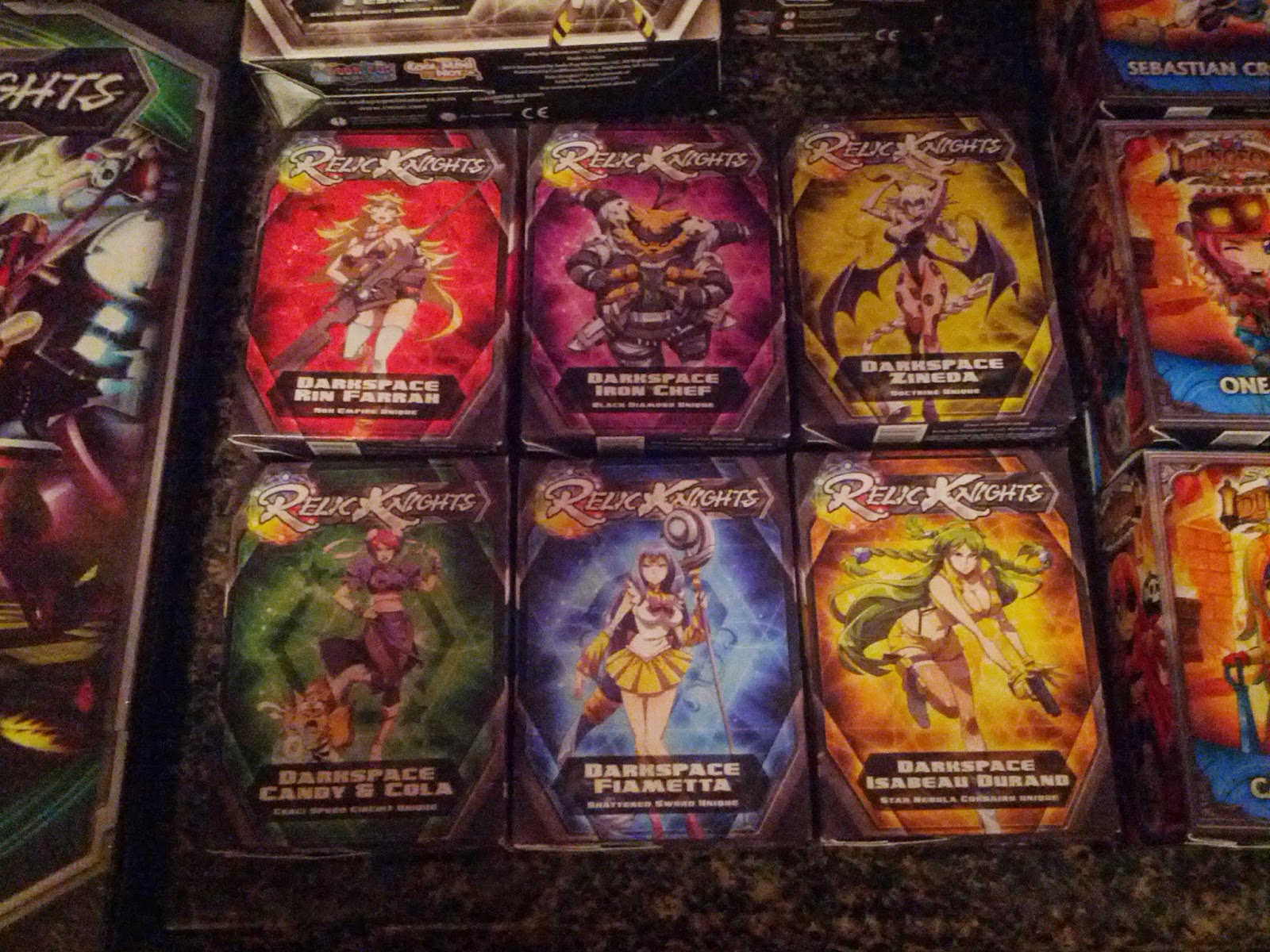 Being a pretty big completionist, I couldn't pass up the Darkspace figures either. It's neat that they are cosplayers, but that doesn't really matter to me. Though I am a big fan of Metal Gear Iron Chef. he's awesome. And succubi are always sweet, so I had to get Zidena... Then there's Candy and I can't pass up a Candy mini... and before you knew it, I was getting them all. The only 2 special edition minis I didn't pick up were the 2 Penny Arcade figures. I've never really been a fan of Penny Arcade, so I didn't see the point in picking them up. So I did miss out on 1 Doctrine figure.

All in all. I'm both super happy that this KS is finally complete, and luckily it seems that I'm not missing any parts. Though I'll find out if I'm missing little pieces once I go to glue everything together. But, all the boxes are here, they all rattle with plastic sounds and for now they are all accounted for. Unfortunately, gluing and playing will have to wait for a bit, as I need more super glue and I'm in the middle of working on Reaper's C'thulhu miniature from the Bones campaign and after that's complete I have a date w/ some SDE base set Kobolds... 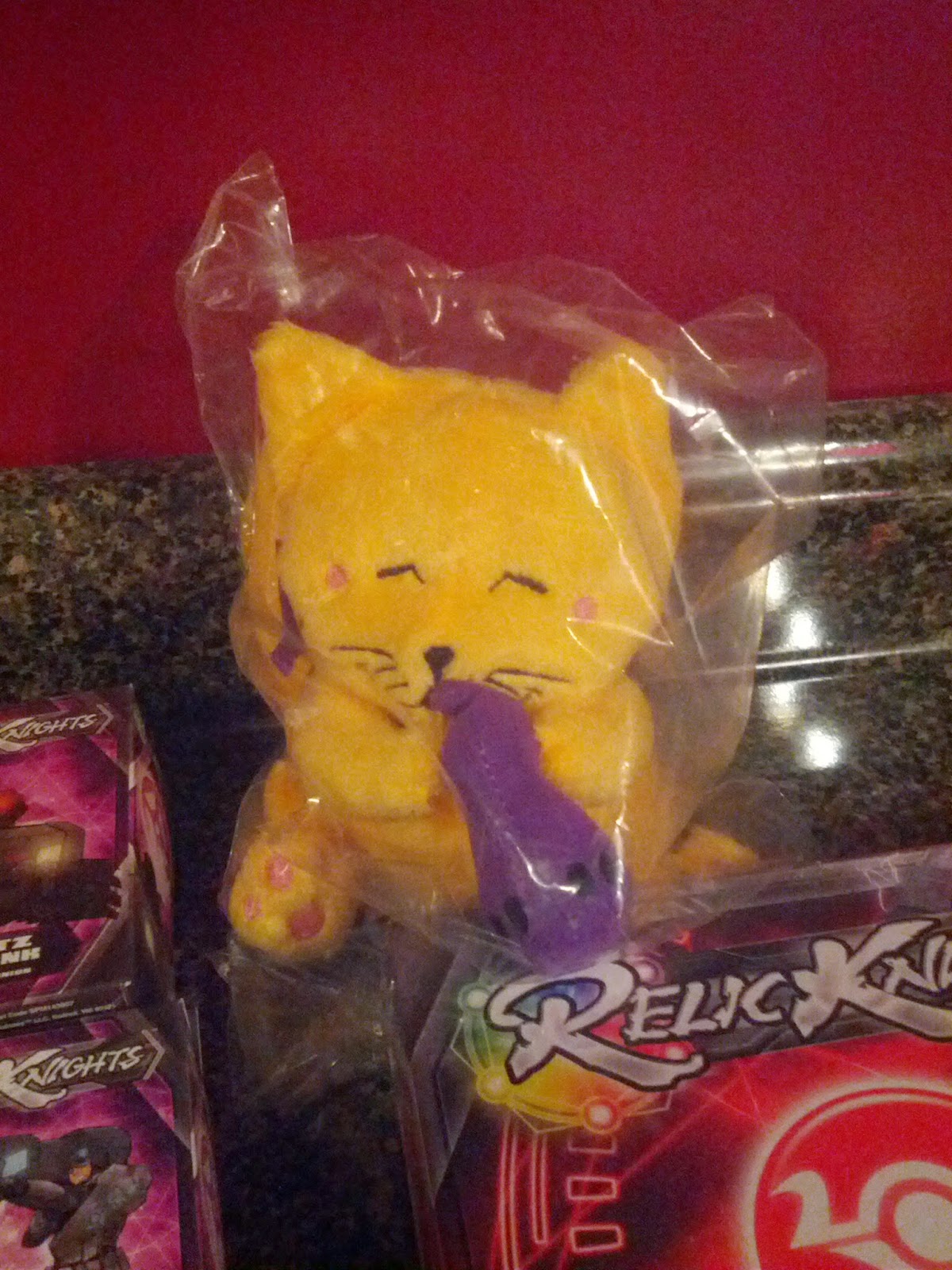 Oh yeah. I also picked up 2 Cola plushies. One for me and one for my Sister, since she's a big fan of Cola and foxes. I will say that I am a little sad at the way he turned out. When I first saw him, I was really hoping that the bottle would be plastic, but it's all plush. The colors seem really off and I don't get why he's yellow... but oh well. I'm hoping that his bottle will go up higher like in the concept art once he's out of the bag. Either way he's still pretty nice, just seems a bit off.