Last weekend was the U-Con gaming convention! With Super Dungeon Explore finished and in tow, I headed south to Ann Arbor, MI for a busy weekend of board, miniature and card gaming! It ended up being a lot better than I expected, but there were still a few issues to be had.  I didn't get as many pictures as I had planned on, but here are a few. 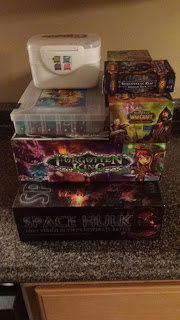 Before I left, I spent the week deciding on what to pack, what to bring for games and how to handle food stuffs. I literally packed and unpacked a box of games to bring along 5 times, once just before leaving that very morning.

Finally I decided on a list of possible games. Super Dungeon Explore (for obvious reasons), Space Hulk, World of Warcraft: TCG class decks with the Scarlet Monastery and Shadowfang Keep dungeon decks, Tentacle Bento, and a old Magic deck. In the hopes of possibly getting some pick up games going.

I left Friday morning at about 6:30 am and headed to my friend Jeremy's house to pick him up. After loading his massive collection of board games into my car, we were on the road by 7:30 am and arrived shortly after 9 am and checked into the Con and hotel. 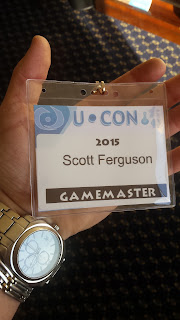 Looks like a pretty solid and busy weekend schedule right? That's what I thought as well. But as it turns out, I had a lot of down time between events. It didn't help that X-Wing got canceled because the GM never showed up. But I did get more than just these games in.

The first game of Super Dungeon Explore went really well. I was super nervous about putting on a good game and my hands were shaking pretty badly while setting things up. But things went really smoothly and the nerves subsided.

It helped that one of my players was actively asking questions. The other guy kind just sat there and didn't talk much, and the third guy never showed up.

They ended up picking Princess Emerald, Fae Alchemist and Questing Knight. They did a good job playing and I did help them a bit. I made sure to explain everything as it was needed, rather than unload tons of rules on them in one go, and it seemed to work. They started to grasp it pretty easily too. 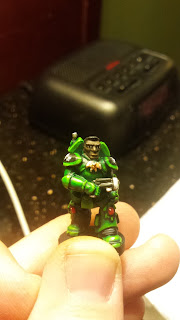 I made it a point to tell them that the goal is to kill the spawning points and get to the boss as quickly as possible and for the most part they kept moving forward. We finished just within the 3 hour time limit.

Lots of folks stopped by to ask about the game and I had one guy sit at the table and just watch it and ask questions. There were a lot of comments about my paint jobs as well, most of which were along the lines of "Wow, those look awesome, you painted these?" The felt pretty good.

After SDE,  I grabbed my paints, brushes and supplies and headed to the Paint and Take. Ready to take mini painting with a bunch of other mini painters. Unfortunately, I was one of maybe 3 people to show up to it. But Jeremy's wife and youngest son joined in, so I spent my time talking with them instead. 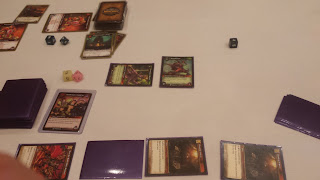 They had a ton of metal minis to choose from, from various manufacturers. I decided on an old school space marine. But I didn't see any GW markings on it, so I'm not sure if it's old 40k, or some generic brand.

I brought my set of GW greens, some browns, silver, black and white with me. So it worked it out I could easily paint him up as a Salamander pretty easily. I managed to finish him in about 2.5 hours and I really like how he turned out. 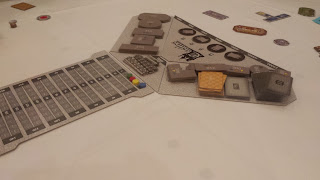 Friday night, thanks to the open time where X-Wing would have been, I got to play a World War II themed board game called Memoir '44, it was pretty fun and I might pick it up eventually. I was also able to bust out the WoW TCG with Jeremy's friend Kevin. And we knocked out a session of Jeremy's new game Above and Below as well, before turning in for the night.

Saturday proved to be a super long day. Jeremy's game of Castles of Mad King Ludwig started at 9am, so I was up and showered around 7:30-8.

Castles went well. I started out in last place most of the game, but managed to pull out a 2nd place finish thanks to my knowledge of how the game works. 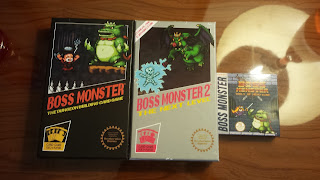 Castles ended a little before 11 and that gave me almost an hour and a half to burn before 40k started. SO I decided to wander into the vendor area. They
had a decent selection of stuff there, one guy even had the Horus Heresy: Betrayal at Calth game, but they wanted full retail on it and I could easily pick it up for way less locally.

I did end up picking up a couple things. Boss Monster and it's Boss Monster 2 and Tools of Hero-Kind expansion packs. Along with the Citadels card game.
Warhammer 40k went really well and I was able to get a grasp on everything that confused me about the game play. Especially the Psyker rules. It started out really slowly and built up into a full unit vs unit match. This final fight featured a bit of terrain for cover rules and Space Marine Librarians. 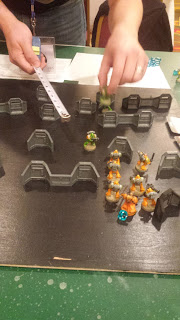 I managed to explode the other guy's Librarian with my Rocket Launcher, thanks to a lucky roll on the first turn, and his Sergeant also was caught in the blast. I then mopped up the rest of his unit.

After the Warhammer 40k game,I had a bit of down time. I ended up playing a pick up game of Boss Monster with the dude I played 40k with.

At this point, I started having issues with a sinus headache, and I thought that it would have been fine. But even after eating and taking some medicine, it wasn't fine.

5pm rolled around and my game of Bolt Action started. It seems like a really fun and interesting World War II war game. But thanks to my headache, I had a really hard time grasping the rules. But I did manage to take out the other guy's tank in one shot, that was pretty awesome.

I got the only point that match, but I failed my objective to capture or destroy the rocket on the runway by turn 6. 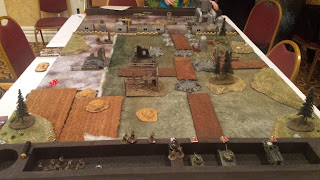 There was a second half of the game, where the rocket turned the dead soldiers into zombies. But at that point, I gave up and called the game and went to bed. I ended up sleeping for 2 hours afterwards. Jeremy and Kevin had no idea where I was, and I awoke to a few "where are you messages". 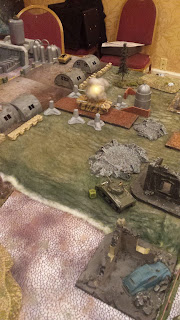 I got back up around 10:30 and went back down to the board game room to see what was going on. Saturday drain everything out of us and we mostly sat around talking, but we did get in a game of Boss Monster before everyone called it a night, around midnight.

Of course, I wasn't really tired, because I napped away a headache, but I didn't feel like being up any more. So I went to bed as well, and rocked out a little Dragon Quest V on my 3DS until I finally fell asleep.

Sunday morning, I was up at 8:30 and prepped for another Super Dungeon Explore game. I arrived at my table around 9:15 and got it set up early. Two kids were already there, waiting for the game to start. So I gave them a little run down beforehand.

The second game of SDE went fairly well. I had a full group this time and everyone seemed to be into it. They selected the same party as the earlier group did as well. But this time they lost Questing Knight in the first tile and the two kids got gun shy, trying to kill monsters from a distance.

This caused the game to drag on and as much as I tried to get them to move faster and target spawning points, they insisted on hanging back to kill monsters and . It was a solid 30-40 minutes between the first mini boss kill and the destruction of the 2nd spawning point. Which meant that the Questing Knight player was stuck in spectator mode the entire time.

Finally after the 2nd spawning point went down, they got Questing Knight back into the game. But they were still in gun shy mode and were attempting to fight the game at range. I decided to push the game forward and began purposefully spawning monster from the final point just to suck hit points out of it, and get Von Drakk to spawn. Which I finally was able to get him on the board with 20 minutes left in the session.

They still intended to hide in Tile 2 and fight at range, much to my dismay.

Luckily, Von Drakk has an ability called Thriller, which I used to purposefully move the heroes out of the hallway, into Tile 3 and surrounded Questing Knight and Fae Alchemist with creatures. Then, after Fae Alchemist bailed from the tile and back to Tile 2, I blocked the hallway door trapping Questing Knight in the room with Nocturne, Von Drakk's shapeshifted form.

With Questing Knight stuck in the room, I went to town with Nocturne, melee attacking and using his Feast ability to heal himself, while I moved my leftover skeletons into the other tile to preoccupy the other two.

By this time it was 1pm and the game was supposed to be ended. But I allowed it to finish and went into main boss is out, lets kill the players mode.

Questing Knight died to Nocturne not much later and I began chasing down the Fae Alchemist and got her down to 1 hit point left. But they kids still wanted to targetthe small monsters, and I had to insist that they go for the boss kill, due to time.

At this point, I started packing up the game parts I didn't need out any longer and finished the game... 30 minutes over the time limit.

With SDE finished, I was supposed to play Lords of Waterdeep. But I was exhausted and wasn't feeling the gaming spirit any longer. So I skipped out on it, and decided to leave the con early. Before I left I stopped by a table where Jeremy and his family were playing a game. He also decided to bail early, but wouldn't be leaving for a few more hours.

With that, I packed up all my games and other stuff, loaded it back into my snow covered car and made the two hour trek back to my house.

Overall, U-Con was a fun experience. I will probably go again next year. But next time, I won't be scheduling events so tight together. While it made my weekend nice and full of things to do, it didn't allow me much down time to recharge. I think that's one of the reasons I ended up not feeling well on Saturday night.

If I do go next year, I will Game Master again. If I do, I'll run Super Dungeon Explore again, but I think I'll also run a game of Space Hulk and Boss Monster. I'm also leaning on the idea of running a demo of Frostgrave, which means I'll be in terrain building mode over the next year. So that's exciting.
Posted by Scott Ferguson at 9:17 AM
Email ThisBlogThis!Share to TwitterShare to FacebookShare to Pinterest
Newer Post Older Post Home