King Starfire and the Herald of Vulcanis Completed!

The paint keeps on flowing over at my house! This week I was able to finish off King Starfire and the Herald of Vulcanis models! Originally I was just painting King Starfire, but I found that I was waiting for paint to dry a lot. So I pulled out the Herald and got to work on him as well. 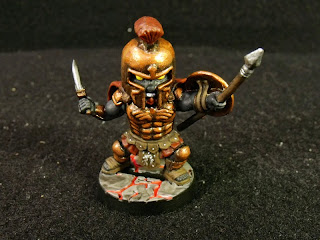 First off we'll go with the Herald of Vulcanis. This guy was the first new single release mini-boss for Super Dungeon Explore. So it's fitting that out of the single small models, he's the first one I painted. 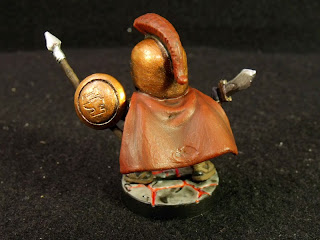 I decided to stick with the charcoal-grey skin on his guy. Because I think if fits him well. The eyes were painted in a similar manner to the Kobolds with them being bright yellow. But to add to the evil nature of him I decided to forgo pupils. I see him as being slightly demonic and chained into the service of Vulcanis. This lack of pupils calls to the notion of his lack of a proper soul.

The armor was painted bronze, mainly because when I look at Roman style armor I think of it being bronze. Unlike the Kobolds though, his armor is not rusty and corroded.

I really liked painting him and it was a pretty smooth job to work on him. I did have one issue with his cape and a puddle of paint that I accidentally wiped away because I didn't realize it wasn't dry yet. I tried to fix it, but it didn't work. So I have a bit of a pock mark on it. 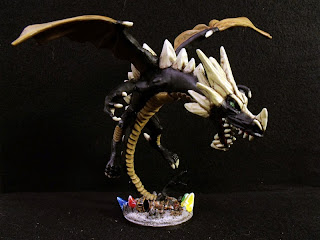 And now we have King Starfire. This behemoth is a upgraded resculpt of the original Starfire model. But more than just a resculpt, it also has it's own stat card, dungeon effects and a new treasure card that comes with it. 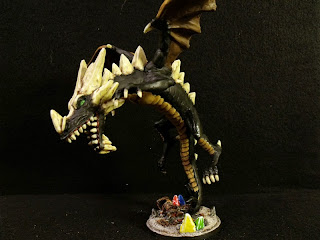 Rather than being made of plastic, it's cast in resin. I'd never had much practice with resin before and I've heard it's fragile, sucks up paint like a sponge and that it's fragile. So I was worried about dropping it, fumbling it or holding it incorrectly. Luckily over the course of painting him I did do all of those things and never once had an issue with breakage.

I ran into an issue with gaps on this model and while I let gaps slide on Rex, some of these ones were horrible. So I ended up using some green stuff to patch him up. getting my fingers into some of the corners was rough, but since he's painted black it's hard to tell where it's smooth and where it's rough. 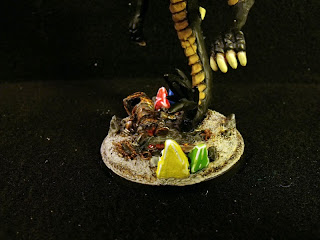 Since he's a larger version of Starfire. I knew that I'd be doing black skin again. In order to keep him as close to the original as possible, I had the smaller model next to me the whole time. This way I could match up what was bone, what was skin and which colors went where.

Overall he's pretty close to the small version, though the skin is a bit more grey and the browns/tans are also slightly different. But since they'll never be on the same table together, it's no big deal. 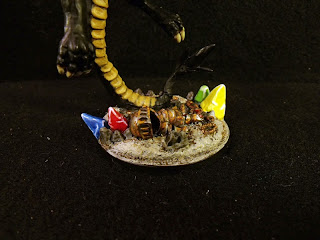 I had a lot of fun painting his base. I ended up adding some sand to the plastic base to add uniformity. The sand was only added to part of it, to give the ground some character. Part is sand and part is stone, some of the rubble was painted as rocks and then the larger ones are painted like SDE crystals.

The jewels, coins and such were painted gold and the fallen knight's armor was silver and then rusted like the Kobold's.  His sword was given a golden hilt with a gem in it, while the blade has rusted with the passage of time.

King Starfire is awesome and he looks epic next to the hero models. I can't wait to plop him on the table and light some loot grabbers on fire with him!

The Super Dungeon Explore painting continues! I'm working through the single releases now and next up I'm going to be painting Captain R and maybe another one along side him. Maybe Nyan Nyan.
Posted by Scott Ferguson at 11:27 PM
Email ThisBlogThis!Share to TwitterShare to FacebookShare to Pinterest
Newer Post Older Post Home