The scourge of Clockwork Cove, Captain R, is finished and ready for battle! There were a few issues with painting the trim on his coat, but that worked out nicely in the end too. I really enjoyed painting this one and he turned out really nice. 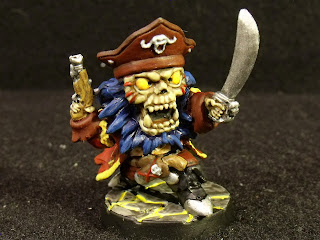 Being a skeleton meant that I could paint him up using my usual mix of paints for bone colors. So, while I was working on King Starfire's boney parts I was also painting up Captain R's face and hands behind the scenes.

The final artwork for Captain R shows him with a black beard. But I'm not really a fan of it, so I decided to go with a blue beard instead and I think it came out looking really good. 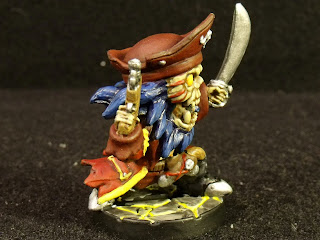 His pistols are painted up to look like wood. I used Reaper's Leather Brown and Earth Brown paints to simulate wood grain. In order to do it, I used the same technique I used on the Minotaur and Mr. Bone dioramas. 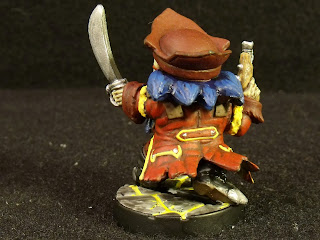 Captain R's hat and coat are painted in a color scheme based off of Captain Hook from Disney's Peter Pan. His coat is a bright red with yellow trim and dark red cuffs. While his hat and pants are dark red.

Overall, I really like the Captain R mini, he's sweet. The expression on his face is great and he looks a lot better with cartoon eyes, than if it was just sockets. I will admit that while I was against the addition of molded irises on the Forgotten King models. The addition of them on this model works really well. 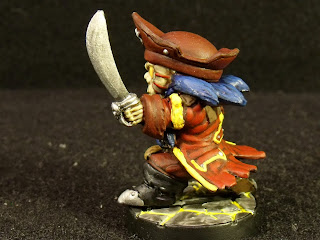 Next up, I'm working on Keally the Dark Strider. I only just started her last night though so it'll be awhile til she's done, since I have a few other non-mini things I'm doing at the moment. But it shouldn't be more than a week.
Posted by Scott Ferguson at 12:53 PM
Email ThisBlogThis!Share to TwitterShare to FacebookShare to Pinterest
Newer Post Older Post Home