Another small break in painting. I've been really busy this last few weeks, and while I haven't painted anything for showing off, I have been working on some things in the background. One of which is this little Succubus for Super Dungeon Explore. 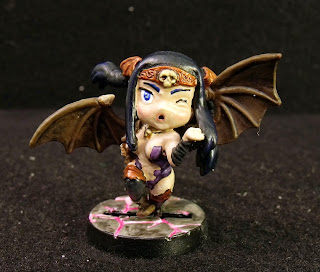 Like Kaelly, Vandella is kind of an awkward mini. She stands on one foot, like Kaelly does and because of
her wings and hair, it makes for some hard to reach places. Originally I had thought of perhaps cutting her head off in order to get in behind her hair and wings, but opted not to instead.

I kind of wish I would have.

Because of her hair and wings it was a challenge to get good coverage. I did cut her off of her base, like I did with Kaelly, but I'm not sure if that made it easier to work with, or more annoying. 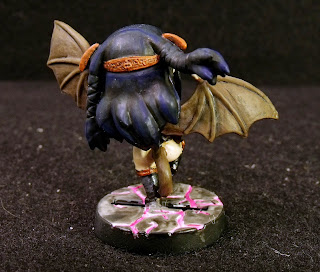 Like a lot of Super Dungeon Explore models, it was hard to see some details. On this model it was where her "clothes" started and stopped. So I did a bit of guessing on that part too.

I knew I wanted her to have black hair, but I also knew that adding white to lighten it was going to be a back move. So I opted for dark blues. I really like how that turned out and you can really see the highlights well in good lighting.

I didn't want to follow the artwork and have too many blacks though, so I went with brown for her tail and wings. While her skimpy outfit is dark to light purples. Then to help the colors pop a little more I went with a bronze circlet and boot accents.

It took me a few weeks to decide to fnish her though. I think mainly due to a bit of burnout. I've knocked out a lot of projects over the last few months, so I'm not surprised. But it also could have something to do with the fact that she was kinda of  fiddly to paint.

Overall, she's a cool mini and I really like how she works in game. Plus, she's a Succubus, so that's a bonus.

Out of the Single Releases, I only have Nyan Nyan left to paint. Then after that it's on to Caverns of Roxor! I highly doubt that I'll be able to get all of this stuff painted before Forgotten King comes out. But lets see how close I can get before it shows up, shall we?