Nyan Nyan is complete! The final single release special edition figure, not counting the Relic Knights special editions, and it's all finished. She's kind of a perfect character for the Halloween season, as she's basically a girl in a cat costume. She was also really fun to paint! 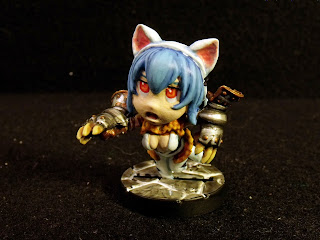 The official artwork of Nyan Nyan has her with a orange tiger suit and pink hair and eyes. But I didn't want to stick with that coloring, instead I went with a light blue base and work it up to white. Then rather than straight black stripes I went with black and worked it up a couple shades of purple. Then I followed up the fur accents with orange. 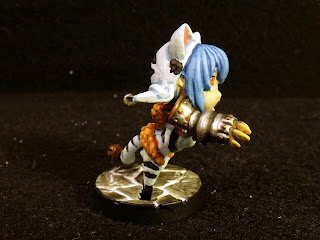 As I was painting the cat suit white, I came up with the idea to give her the same hair color and eye color of Rei Ayanami from Neon Genesis Evangelion. I think it turned out rather well also, and actually her hair is actually a better blue than the Hexcast Sorceress. Her eye color is a reddish orange mix and then highlighted with light orange. 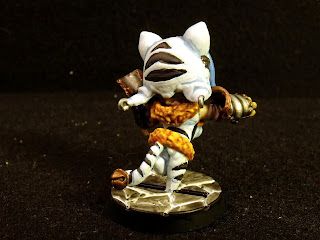 Her claws were painted gold and silver. Then like most horns and claws I painted them up with my standard paint scheme. The tops of them were painted with GW Boltgun Metal, followed by Black Ink, then GW Chainmail, more Black Ink and then finally another coverage of Chainmail and highlights of GW Mithril Silver. All accents on the claws and the bell on her tail were painted Gold. Then highlighted with a little Gold mixed with orange. And finally her base has the grout painted white and then grey stones covered with black ink. 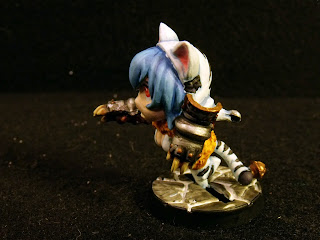 With Nyan Nyan completed, its time to move onto Caverns of Roxor! I've got some ideas on how I want to go about it and hopefully I can knock it out faster than the Base Set. Considering that a lot of the models have fire in them, I should be able to knock a lot of them out at the same time. Or at least take care of the fire and then finish off each unit in turn.
Posted by Scott Ferguson at 9:25 PM
Email ThisBlogThis!Share to TwitterShare to FacebookShare to Pinterest
Newer Post Older Post Home