WIP: Yrsa, Witch of the Wilds - Adding More Details to the Base

Base work continues! Old Scott would have stopped at the red bushes and called it "done". But I knew I needed the forest floor to have more of a wilderness feel to it and it just didn't have that feeling yet. A trip to Hobby Lobby fixed that, and I picked up a couple different sets of train scenery flowers. Also, I began blocking in the colors for Yrsa's equipment and painting it.

I think it's safe to say the base is now done. I could add more to it, but I like where it's at now. Before, it looked too plain, but thanks to Hobby Lobby's train modeling section I was able to get a few different flowers to try out.

One package was a bunch of pink and yellow flocking. I decided to use the yellow and sprinkle it around on the ground to emulate dandelions. It
worked great! At first I didn't think it was going to turn out, but I went easy on the glue and tried to keep it sporadic.

The other package was a set of "lillies". They came on premade stems, which I cut apart and glued onto the red bushes. I wasn't sure how many there should be, so I just kept adding them until I felt satisfied with them.
I also decided to keep some of the green from the stems, to simulate the leaves of the flowers.

Overall I'm super pleased with the base now. The dandelions look sufficiently wild and the red bushes and vines look more like shrubbery and less like a briar patch. 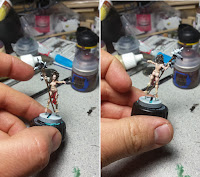 Yrsa also got some more paint lately, and she is nearing completion. I'm not sure if I care for the added color that I was talked into doing on her skin, but I'm not going to go back and redo it for the 50th time. I've moved on to her weaponry and clothing.

I can't help adding red into my minis, somewhere on every project there is probably red on it, and Ysra was no different. She is rocking a red loincloth and a few red jewels. The loincloth might get some trim work done later on, but I need a new thin brush. My 18/0 liner is dying and I 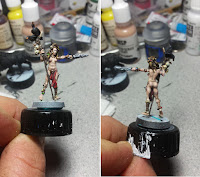 can't find a brush with the same tip on it locally. It seems to be an oddball, since every other 18/0 brush I find seems to have larger bristles. It's a shame, that brush has lasted me for nearly 6 years easy. 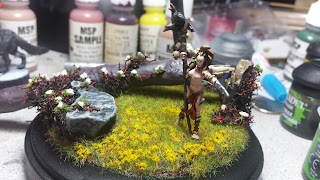 Anyway, I decided to make Yrsa a brunette and gave her more brass/copper metals, rather than steel/iron. Though the sword that's in her staff is steel, but it'll be all rusty and old looking. She has a lot of small chain roping on her too. But I decided to make them look more like rope than metal.

She's pretty close to finished and once she's done, I can finish the wolf. I started base coating him, but haven't put much time into him. This project is coming along nicely and should be finished in a few days!