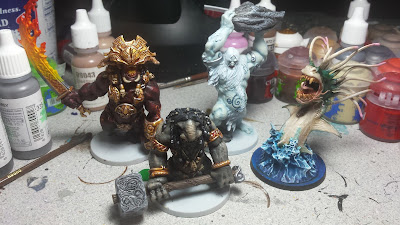 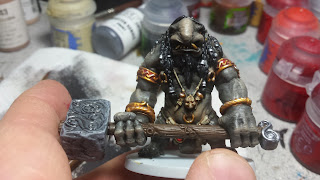 The troll turned out great and I've gotten a lot of compliments on his skin tone. I had wanted to move away from gold for his jewelry, but if it would have been silver they would have gotten lost in the grey skin. But it still works, so I'm happy.

These large monsters took a lot longer than I had planned on, and I'm already into my 3rd week of the project. I'm really hoping that I can speed it up on the smaller minis, without sacrificing quality. 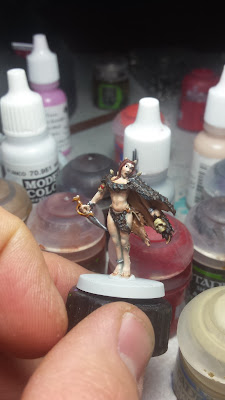 For my first human size mini, I started with the Witch (sorry I don't know all the names of the figures, since I
don't have the game cards). She's mostly all skin and a fur loincloth and cape.

I decided to paint her in fair skin tones, with a bit of blue wash added in to give her a cold look.

I've been playing with my skintone painting a lot lately, in attempts to make them less china doll and more believable. This is all work towards being happy with my skin painting skill level, that I can finally attempt that Kingdom Death: Distracted piece.

So far it seems to be working well.

Her cape and loincloth were painted with Rhinox Hide and then drybrushed with lighter browns. I then painted black stripes on it and highlighted them with grey to give it more detail. 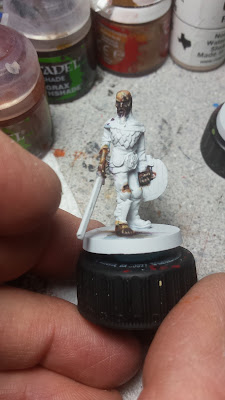 This mini had some really shitty mold lines though and it didn't like to clean up well. I was worried about ruining a few parts of it, and ended up forgoing cleaning them all off.

I'm also not a fan of the sculpt overall. It leans too far forward, which I tried fixing by heating it up and cooling it down with hot and cold water. Her face seems a little off and the horns on her all seem out of place.

But she's done now and it's on to the next mini, which is the Soldier of Hel. He's an undead viking and will be getting rusty armor and weaponry, as well as a more dirty look than the other minis.

So far, his skin is finished and I can start work on the rest of him. He should be finished tonight.