The commission for Blood Rage continues! The Frost Giant is now finished and I've begun on the Fire Giant.

So far the paint jobs have gotten a lot of compliments, and I've shown the progress to their owner and he's digging it. So I have no worries about them not being well received. 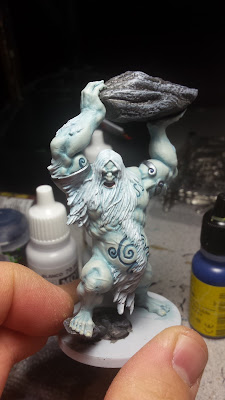 The Frost Giant just needed some drybrush work on the rocks and his arm bands finished. I'm really pleased
with the armbands too. I think I've finally gotten the hang of using Reaper's metallic paints, which is a good thing as I really do like their coloring.

The stone was painted with Vallejo Grey Green and washed with Citadel Nuln Oil, followed by drybrush of Grey Green, Neutral Grey and White in that order.

I really tried to pay attention to how light would reflect on the armbands. Metallic painting has always been one of my weaker areas, and on this I think I've leveled up a little bit. There is still a lot of practice that needs to be done and I need to take more time with my metals. Usually I slack some silver on it and call it "good". But that needs rectifying. 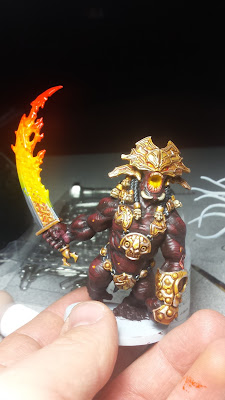 When I originally finished the Frost Giant, it was jokingly said that his butt crack was too subtle. So I added in a line of Drakenhof Nightshade to it. It works better that way, even if I felt a little strange painting it.

I really like the way he turned out. The blue skin has gotten a lot of compliments as well. I haven't done his base yet. But that'll get done once all the other minis are finished. Thinking the bases will be a mix of grass and snow. Haven't decided yet.

The Fire Giant is well on his way to being finished. Currently I just need to finish his sword, underpants and then paint all the gems. This guy has been a lot more of a job that I was anticipating.

His skin was painted using Rhinox Hide and then washed with Nuln Oil. After the wash was dry, I started painting Rhinox Hide back on, following the lines of the muscle on the mini.

Mephiston Red was added to the Rhinox Hide to highlight it, this was done twice. Afterwards, I began adding Reaper Tanned Skin to the mix to highlight it further and give it some flesh tone.

I decided to have the eyes and mouth, as well as the body markings, all glowing with fire to give it a more monstrous, mythical feel.

The gold was all done using Retributor Armor, Auric Gold, Liberator Gold and Runefang Steel. I used Mengel Mini's recipe on it and I am really pleased with the results, especially the way the Rhinox Hide defines the shadows.

His skulls and horns were painted using my own bone recipe. Originally I was going to paint them silver, but decided that there was an absurd amount of metals on this guy already. Silver skulls would have looked ridiculous, and I'm glad I skipped it. Plus how bad ass is a guy that hangs the heads of his dead enemies in his hair?

That's it for now. Tonight I'll be putting the finishing touches on him and then I'll be starting on the Sea Serpent, my favorite of the Blood Rage monsters.