WIP: More Work on the Market Stall, and Beginning Paint on Shojo

I didn't get a whole lot of seat time this week, but I did manage to do a few things on the Shojo project.

As of now, the market stall now has rope tying the wood planks together and I've begun work on painting Shojo herself. 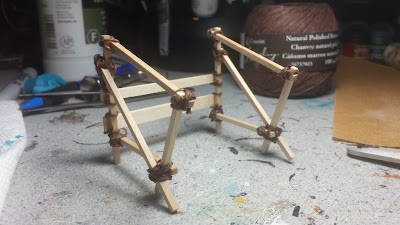 Let's start with the market stall.

For the market stall I knew I needed to have some bindings of some kind tying it all together, otherwise it would look unfinished and just glued together. After a bit of looking around, decided on using hemp to act as the ropes. I would have liked something a little thinner, but actual sewing thread seemed to small and it was the only other option I had. 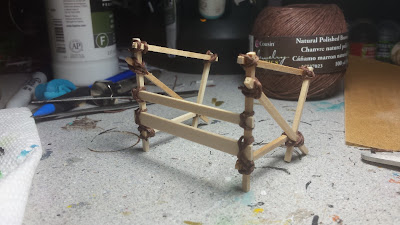 All of the hemp is glued on with super
glue and then wrapped around the wood, then glued again to hold the other end down. I didn't attempt to knot the hemp on the frame. Instead I am going to attempt to knot it up, cut out the knot and then glue it into place. I haven't done that yet though. 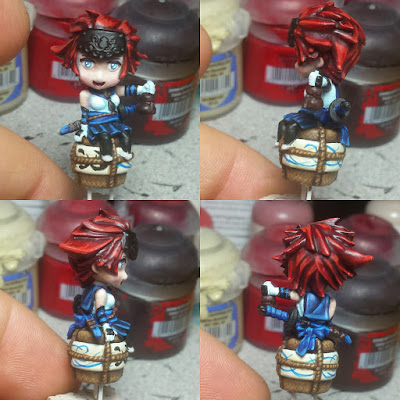 The next steps, after I do the knots, will be to work on the canopy. But I still need to source some fabric and rod for the roof supports yet, but I haven't had a chance do any looking.

With the market stall in a holding pattern, I decided to get started on Shojo herself.


For Shojo, and all the Ninja All-Stars models, I will be following the card art as close as possible. Also, for Shojo, I am going to attempt NMM steel. I've attempted NMM before, but for the most part I feel like it's a skill I am severely lacking in. So for this model, I've decided to use her as a guinea pig.

But for now, I'm just working on her actual paint.

As of right now, she's nearly complete too. I just need to finish her leggings, shoes and her gourd flask.

I'm really happy with her so far, especially the texture of the basket and the freehand on the basket's label.

That's it for now though. Until next time!