Well, the event was on Saturday, November 12th and the plan was to paint up some snap together Space Marines that Games Workshop provided. The event was posted on to the store's Facebook page and I told some friends about it as well.

It went pretty well, I ended up assembling minis before we got started, because the shop owner wasn't able to knock them out before hand, but that's not a big deal. Only two people ended up coming out and they were my friends, so it made it a bit easier on me.

I painted a mini alongside of them, so I could show them what I was talking about. Also, while I rationed out the paint, I made them thin it themselves. We started with just using regular paint, but by the time we got to the Bolter I had  them try out Nuln Oil and washing it.

Everyone had a good time and both the shop owners and myself used it as a learning experience. The next one should go a bit smoother and I already have some ideas to make things better.

All in all it was fun and I look forward to doing it again. Here are the finished minis from the group, next to my sample marine that was used as an example. 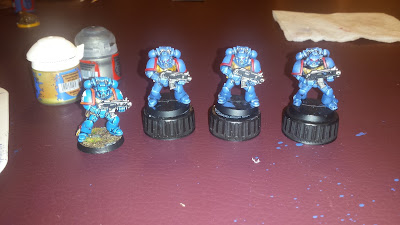