Are you guys getting tired of this fella? Cause I am, he's slowly draining my will to paint and I can only blame myself.

The silver has become a chore and while I think it looks awesome and I have been able to perfect it over the course of the miniature, there is just so much of it that it is getting tedious (and I have been known to do some pretty tedious things).

Luckily, I can finally say that his armor is finished and I can now move on to a different section, before I start on the sword and shield's silver. 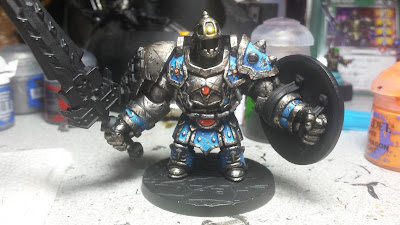 Boy am I glad that's over. But I knew the silver was going to be a trial to begin with.

The first thing I did was to paint the gems. I decided on a red/orange to compliment the blue armor plating. The only issue I had was the belt buckle gem area is actually a flat surface. There is no definition to it to make it look like a gem, but the box and card art definitely show it being a gem. 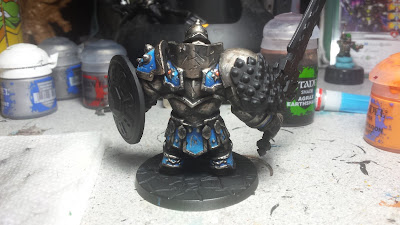 I had thought about painting an eye on the belt buckle to add to the spooky factor, but since he
already has the glowing eye in his helmet it would have seemed a bit off.

Next up, I am going to move onto the shoulder decoration. I'm going to paint it up with gold, in kind of the same manner as the steel. I think I have a pretty solid idea on how it will work out. Then the round pieces on it will be steel studs.

That's it for now though. I'm going to save the sword for last, because painting metallics on weapons always has has been one of my weak points.
Posted by Scott Ferguson at 1:43 PM
Email ThisBlogThis!Share to TwitterShare to FacebookShare to Pinterest
Newer Post Older Post Home