Work took a minor hiatus this weekend, as it seemed like all I did was go out of the house. But as of Monday, I was back to work on the Terminator Captain. I managed to get a lot done since then too, his legs are finished for now. I've since moved on to the torso, which is coming along nicely. 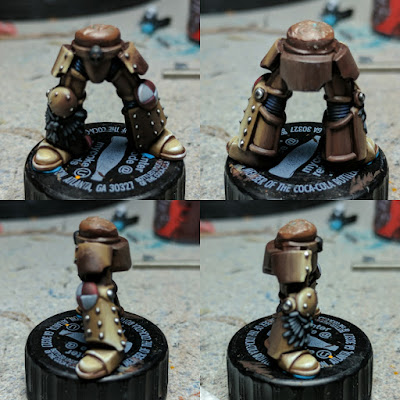 Before the weekend, I started on the legs. Based off of my test pieces, I knew I wanted the shadows to be darker than what I had before. With that in mind, the shadows were painted with Rhinox Hide and the bright areas were basecoated with Steel Legion Drab. The dual prime helped me a lot, thanks to being able to see where the shadows and the light areas should be.

I started with the shadows and worked them up from Rhinox Hide to Steel Legion Drab, custom mixing as I went along. Using thin layers, I tried to keep the transition as smooth as possible and worked each section individually, rather than going over the whole piece at once.

While working, I would periodically dry fit the torso and arms to the legs and see how the shadows looked with the upper half of the mini in place.

When I was happy with the shadows done, I began working on the highlights. I started by working the Steel Legion Drab up to Ushabti Bone and then up even bright with White. The goal here was to have as much contrast as possible between the shadows and highlights.

More thin coats and test fitting later I was happy with the bone color for now. But I'll tweak as needed, once the mini is all assembled.

With the bone color done, I knocked out all the little details. The flex hose on the hip and knee joints was painted black and then worked up to blue, rather than white or grey. I did this, because the angel icon on the right leg was painted in black and grey and I needed to make sure the two surfaces looked like different material.

The knee pad was an interesting challenge, because it is mostly shaded by the helmet he is holding in his hand. So I needed to make sure that the red and white weren't too bright. And the rivets also proved to be a slight challenge, because of the range of lighting on the surfaces, but I think they look OK. 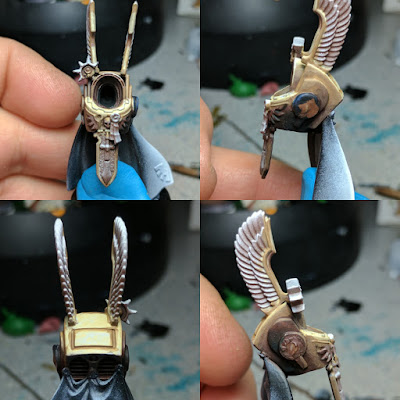 After I was finished with the legs, I moved on to the torso. I decided to blue tac the cape to the bottle
cap for ease of painting. Otherwise trying to hold it would have been a giant pain in the ass.

Following the same steps as the legs, I painted all of the shadowed areas Rhinox Hide and the light areas Steel Legion Drab. But I also painted the brightest surfaces with pure Usbhati Bone too.

Like the legs, I started on the shadows first. But this time I mixed some black into the Rhinox Hide to get deeper shadows where the arms and shoulders would be blocking the light.

The highlighting went even easier than the legs, thanks to the surfaces I was dealing with. I only had a slight issue with figuring out how the wings on the top of his back should be shadowing the area. But after playing with it under my desk lamp, I decided how I wanted to go about it.

The wings themselves will be the last bit of the torso to get painted, mainly because I need to use them as a grip point while painting the inside of the cape. So they will be painted after he's assembled. 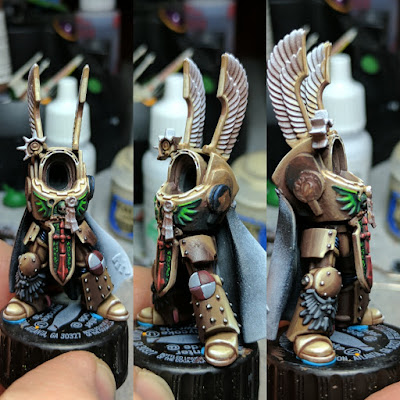 Before I could finish all of the bone on the torso, I needed to paint the chest details. Otherwise, I
would run the risk of ruining already painted surfaces and needing to go back over them. That's no fun.

I painted the green areas first, using a mix of Black, Caliban Green, Warpstone Glow, Moot Green and White. The loinplate, wings and recesses around the chest skull were all painted with these mixes. The loinplate and chest recess were painted by dabbing dots of green all over it, kinda like pointillism.

The broken sword icon was painted with a mix of Rhinox Hide and Khorne Red, then highlighted with Khorne Red and mixes if Mephiston Red, Wild Rider Red and White. When it was finished, I shaded around it with pure Rhinox Hide.

Overall, I'm super happy with him so far and I'm roughly 15 hours in, maybe closer to 20. There's a long way to go yet. But he's coming together!
Posted by Scott Ferguson at 10:27 AM
Email ThisBlogThis!Share to TwitterShare to FacebookShare to Pinterest
Newer Post Older Post Home