Its time to move on to the base, finally. The first step was painting a freehand portrait of Lion el'Jonson the Primarch of the Dark Angels chapter of space marines. Generally, I don't do a lot of freehand work and I do even less actual paintings. But I have done something similar before in a previous project and had good results, so I thought it'd be worth a shot.

Luckily I wasn't drawing the portrait from scratch, instead I found a suitable picture on the interwebs. Recreating it seemed like a daunting task, but thanks to some tips from Twitter friend, kelfrei, I was able to do this one much quicker and with less worry about it needing to be "perfect". 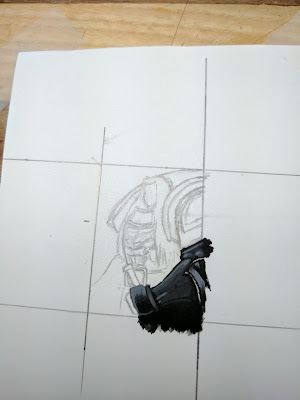 The first step was to shrink the image to a proper size, which ended up being about 3cm x 4cm. From there I used my ruler to get the general layout and size of things as close to the original as possible. This was done by measuring a few reference points on the shape I was drawing and then laying out dots on the bristol board and then basically playing connect the dots.

Once that was all finished, I started on the armor plating.

The armor is all black and metallic and since it's a painting I knew I couldn't use metallic paints, so I needed to pay attention to the grey and white highlights of the original piece and simulate the NMM on them. 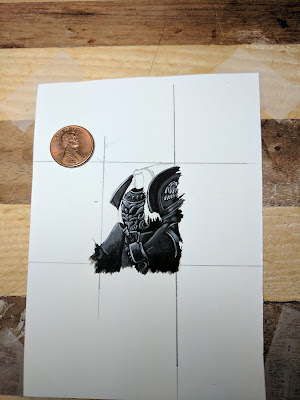 I made sure to paint this at my desk as well, rather than the kitchen table. That way I had better light and could see the various highlights of the black easier. Too many times have I not pushed contrast enough due to poor lighting, which seems odd. You'd think having low light would make you over do the highlights to compensate.

Everything went really smoothly and I managed to get all of the armor painted over a couple of nights. It all started coming together and any anxiety I had about it began to go away.

The only part of the armor that seemed to be the hardest was the ornate decoration on his chest, but in reality it wasn't that bad at all. Actually, that issue goes to the wing on the left shoulder, it was kind of a pain in the ass.

With the armor all finished it was time to move on to the fur, the background and his head.

First up I knocked out the fur on the top of his shoulders using Rhinox Hide, XV-88 and Ushbati Bone in various mixes and layers of little lines over top of each other. 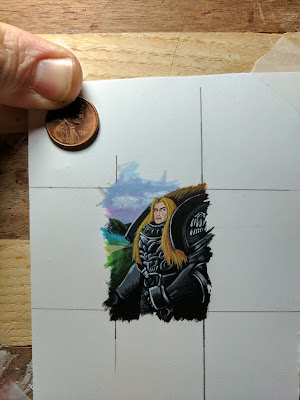 After the fur was done, I started on the background. This is mainly because doing his face scared the crap out of me.

I tried to follow the colors of the original's background as close as possible, and I think I did pretty well. But I took a bit of artistic license on it too, since I couldn't really tell what the background was originally.

Overall, I'm really pleased with it and he's gotten a lot of likes on social media. That was a huge confidence booster, because I've always felt slightly inadequate in my freehand painting skills.

Work continues! There's less than 2 weeks to go until Adepticon and I still have tons of work to do. Catch up with it as it happens on Twitter and Instagram.