It's time for another Chibi Swap! This time Chris chose Brave-Mode Candy and I chose Ser Snapjaw, both from Super Dungeon Explore. With minis in hand, we both got to work and I have to say both of these figures turned out excellent!

Once again, I had Chris do a write up on Ser Snapjaw, so he can share his experience of painting him in his own words. So lets check them out! 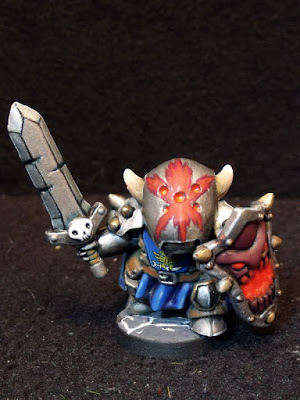 Hi, it’s Chris from the Painted Fox again to talk about the second chibi paint and exchange Scott and
I did a few months ago. This time around I was painting up the kobold knight Ser Snapjaw from Super Dungeon Explore.

The model was cleaned as usual and primed with what has become my standard method of zenithal priming using white from above and a black from below. I don’t use anything special for priming, just the cheap rattle can you can get from just about anywhere, in this case I used Krylon. 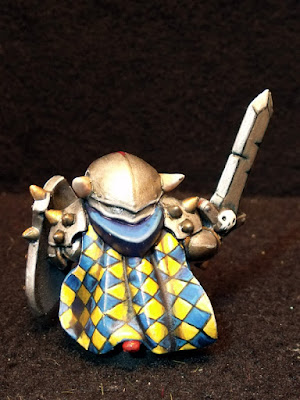 Since Snapjaw isn’t a super complex model, base coating him was pretty straight forward. The armor, sword and shield were all base coated in Citadel Leadbelcher. The cape and robes were based in Citadel Regal Blue and the few leather bits were done in P3 Bootstrap Leather. After base coating the model the individual sections were given a wash. Citadel Agrax Earthshade on the armor followed by spot washing with Citadel Nuln Oil, the weapons and leather were washed

with Nuln Oil while the cape and cloth bits were washed all over in Citadel Drakenhof Nightshade a with a follow up of Nuln Oil in the creases of the cape.

I then went over the armor, shield edges and sword blade again with Leadbelcher to clean up any spots and smooth out the lines from the washes. After that a mix of Vallejo mixing medium and P3 Cold Steel was made up to layer and highlight all the silver parts of the armour, the edge of the shield and the sword. A final highlight of Vallejo Dead white was added the edges.

The spikes on his shoulders were then given a coat of Citadel Balthasar gold, followed by a wash of Citadel Seraphim Sepia and then highlighted with a mix of Balthasar Gold and Citadel Auric Armour Gold for highlighting. The face of the shield was given a coat P3 Sanguine Base with the eyes and mouth getting Vallejo Dead white. The red parts were then highlighted with P3 Skorne Red before. A glaze of Citadel Bloodletter was applied to the face, eyes and mouth, with a second glaze added to the eyes and mouth to give it that glow effect. The spikes on the shield were done in the same way as the shoulder spikes on his armor.

The horns on the helmet were based in Citadel Karak Stone with P3 Menoth White Base and P3 Menoth White Highlight used to make the transition layers. The holes in the face of the helmet were painted and glazed in the same way as the eyes and mouth of the shield. The final touch on the helmet was the red star mark. This was done with a base of Sanguine Base, and highlight of P3 Sanguine Base Highlight followed with layers of P3 Skorne Red and mixing medium until it was at a level I was happy with.

The cape and cloth where highlighted with a mix of Citadel Regal Blue, Citadel Ultramarine Blue, Vallejo Electric Blue and Vallejo Dead White until I was happy with a nicely layered blue cape. Unfortunately it felt like the model was missing something still. I decided on the diamond pattern on the cape to liven it up a little. I thought this would look better than trying to do scrolling freehand because of the sharp ridges of the cape. I then drew in the diamond pattern with a pencil before outlining it in P3 Thamar Black. Then I used P3 Heartfire (yellow) to fill in the diamonds highlighted with Vallejo Dead White. Nuln Oil was added to some of the recesses again to darken it down after adding in the bright yellow. After this a highlight of Citadel Tallarn Sand was added to the few leather bits on the model.

At this point the model was pretty much done. I added in a freehand double headed turkey, I mean eagle, holding a sword on his chest just to make it a little more different. He was then clear coated with Army Painter Anti Shine. The very last thing was to go back over the glowy red bits with Citadel Ardcoat to bring back the glow after the matte sealer had been applied.

So that was it. It was a fun model to paint and hopefully this wasn’t too long winded of a write up. 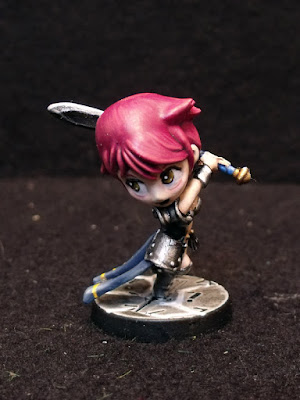 Chris' first choice was, once again, Twilight Knight. But, sadly she seems to be out of stock everywhere. So for his back up choice he went with Brave-Mode Candy.

Brave-Mode Candy actually comes as two models. Herself and Never-Lost Cola, who act as a pet in the game.

Fort these two, I decided to stick pretty closely to the artwork for the color choices. This is mainly because I really liked her color scheme and on Candy miniatures I never change her hair/eye/skin color anyway.

Since I had already changed how I do my chibi eyes, I used her as the example for the updated Chibi Eyes tutorial, which you've probably seen already. I am really happy with the style change for eyes, and her's are some of the best I've done up to that point. 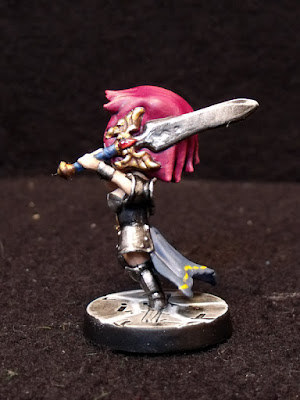 As part of my goal of improving my TMM skills, I used Candy as a bit of a practice mini. This is the next step in working out a high contrast way of painting TMM. I had originally started testing things out on the Iron Golem (which still isn't finished). For that mini I had a few more steps, but after finishing he armor plates on him, I realized that I could dial back the steps.

On Candy, each of her armor plates were base coated with a mix of Citadel's Leadbelcher and black to give them a darker base coat. From there I blended black into the darkest sections and then worked up the highlights with Leadbelcher, Ironbreaker and Stormhost Silver.

I'm really happy with the end result, but I think I still need to work on blades a bit more. But thanks to a class on NMM at Adepticon this year, I am pretty sure that I have an idea on how to proceed. We'll see how it shakes out when I get back to work on the Iron Golem. 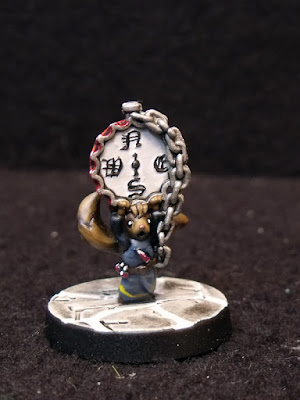 After the whole model was sprayed with matte varnish, I went one step further and used 'ardcoat to add a bit of extra shine to the metal highlights. I
think this really help the metal pop and adds in a tiny bit of gloss to the now matte metallic paint.

Cola was a pretty simple paint job, since he's so small. Honestly I wish his model was a bit bigger, he's tiny compared to the rest of the pets in the base game and its a bit of a shame.

For the most part, he's the same as the artwork as well and I tried to get it as close as possible. But due to his size, it seemed hard to tell what was what.

The best part of this mini was the compass, which is a bottle cap. I knew I needed to do some kind of design on the back of it, but I wasn't sure what to do. Finally I decided on a throwing star. 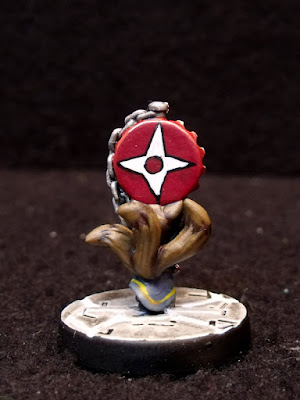 The hardest part was deciding on a color for the cap and how the design would look. After a bit of sketching, I finally went simple and just did a solid red cap with a ninja star on the top. If I had felt more confident in my freehand, I would have put
some lettering on there. But I chickened out.

That's it for Candy and Cola! It was really fun to, once again, knock out a few more SDE minis that weren't for my own personal use.

So far though, I have yet to paint my own Candy and Cola or Tabbybrook Mage (from the first Chibi Swap) for use in my own games.

That's it for now. You can find Chris on Twitter @Rallyfox and I am as always @ryglore.