When Ninja Division released the Jack Scarecrow mini-boss, I fell in love with the mini instantly. It helps that, in general, I am a fan of Halloween and this was released right around that time (and along side Beatrix the Witch Queen).

I decided to make a display piece using him, which now means I need a new one for my actual SDE collection too. But that means I just get to paint him again, which is alright since he was a fun mini to paint up. 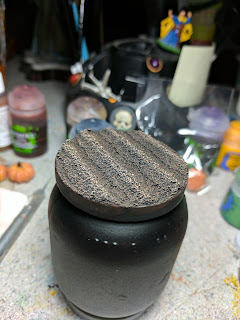 For him, I wanted to have him standing in a farm field. But I didn't know at the time what I was going to do with it. For starters, I just got to work on making the base itself and figured the plants would come to me eventually.

The crop rows were actually really simple to make. I just took sticks of spaghetti and glued them down and then covered them with a couple layers of silica sand. First a layer to cover everything and then another layer to fill in between the spaghetti and base.

The dirt was painted using Rhinox Hide (my favorite brown ever) and then washed with Agrax Eathshade and Nuln Oil. I then drybrushed Rhinox Hide back over top and started mixing in Vallejo Chocolate Brown and Flat Earth into the mix  to lighten it up, before adding in a bit of Ushbati Bone for a final highlight.

This was all well and good, until Sophie suggested that I add in some gloss to the base to make it look a bit wet. So I covered it in 'ardcoat and it looked nice, but a
bit too glossy. So I went over it once again with the drybrushing steps to give it a bit of a wet/dry look. This picture to the right, is before the gloss step, btw.

With the field planted, it was time to decide on crops. I had thought about corn, but didn't want to end up with Jack being obscured by tall plants. Then I thought of just using some flock to make it look like early sprouts of a bean field or something.

Finally after an uneventful run to Hobby Lobby, I decided to do pumpkins and to sculpt them myself. 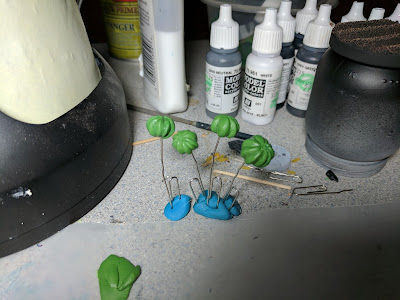 Once again, I can thank Sophie for this, because of her current project and all the sculpting she's forcing herself to learn. I decided to push myself and try my hand and creating them from scratch. I'd never done any major sculpting work before, so it was a interesting learning experience.

Originally, I tried sculpting them in one shot, but failed miserably at it. After minor frustration, I decided to just make balls of GS and let them dry. Then once they were dry, I drilled them out and glued them to paper clips for better handling.

I then made little sausages of GS and laid them down vertically across the surface of the ball. Once it was in place, I formed them a bit to give them the shape I needed.

After all four were finished, I let them dry again and the next night I added in some stems and they were ready to go. 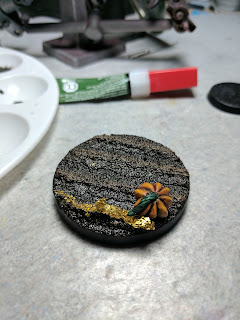 The final step of the base was figuring out the vines. Another failed trip to Hobby Lobby had me thinking to check a train shop for scenics. But, I did have some etched brass ivy on hand that I was unsure of using. I figured it would be a pain in the ass to work with.

Well, once again Sophie was able to talk me into using it anyway and I decided to go with it. It wasn't that bad at all. After I twisted and bent it up and it worked really well and the effect is pretty much exactly what I was looking for.

After priming them black, I glued them into place and started painting them Caliban Green. I did a few thinned coats, so I could try to get in all the recesses. Then I mixed in Warboss Green and some white to highlight it up.

It took a few passes of each color to get the look I wanted and once I got to the lightest colors, I made sure only to highlight the vines in select places. There were some issues with coverage on the brass though, which was annoying. 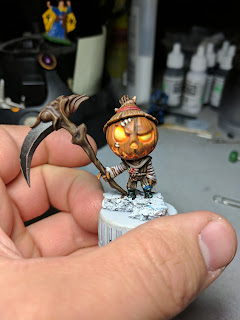 While I was in between steps on the base, I got started on the mini for Jack himself.

I started with his head, which I took another suggestion from Sophie (there's a theme developing here), and base coated it with Rhinox Hide. I then glazed Chocolate brown over top and started working in some oranges, starting with Troll Slayer and then mixed in Fire Dragon Bright and finally Yriel Yellow.

I wanted to try and keep to browns and tans for his clothing and had thought about doing a plaid neckerchief, like in the artwork. But the actual model is sculpted like its more of a burlap sack, so I painted that tan too. Instead I saved the plaid for a small patch on his chest, which ended up working well and wasn't too much.

His hat was painted with Rakarth Flesh, Ushbati Bone and White. I layered vertical lines over top of each other to simulate straw. I wasn't sure how it would all work out, but the effect came out really nice in the end.

That's basically it! I am really happy with him and he's gotten a lot of compliments from everyone I've shown him to. I'm especially proud of the pumpkins and how they came out. It wouldn't have turned out nearly as nice, if it hadn't been for Sophie giving me suggestions, so huge thanks go out to her. She's the greatest hobbyistgirl.

Let's check out the finished piece!