What do bone, gold, brass, copper, leather, rusty metal, mud, and red cloth all have in common? 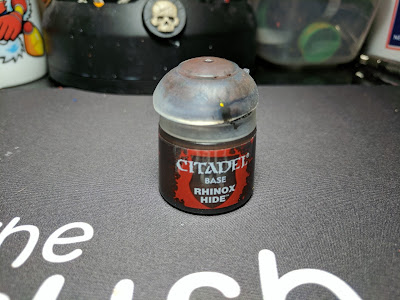 Rhinox Hide, it is quite possibly the most versitile color I've ever used in the current Citadel line of paint. Since it's release, I've found multiple uses for it and emptied half a dozen pots.

Released as a replacement for Scorched Brown during the last major paint range shake up. It is actually quite a bit darker of a brown than its predecessor, and slightly less red. Unlike the change from Devlan Mud to Agrax Earthshade, this is actually a boon.

If I remember correctly, I'd never used Scorched Brown for anything other than a base layer for browns. Of course, this may also be because my style and skill level has changed over the years, as much as it does the change in shade.

It hadn't clicked with me just how much I used it until after I painted the Deathwing Terminator Captain for this year's Crystal Brush. For that model, I used Rhinox Hide in the shadows of nearly everything. From the actual bone colored armor plates, to the red sections and since then I've noticed myself using it on various other models as well.

Most notably, I used it on Iron Golem on the gold of his sword hilt and shield, trying for a high contrast metallic, using it in the darkest sections and darklining. But more on that in a bit.

Add this on top of the fact that I almost always paint the sand on my bases, leather, wood and red cloth with it. It really is the MVP of my paint collection.

Here are some examples of things I've painted using Rhinox Hide, either as a base or shadow.

All these uses, and more, just from a single color. There's a reason that I keep an extra pot of it on hand. It really is the most versatile paint color I've found, in the Citadel range.

If you haven't tried it, give it a shot! Or, if you've found other uses for it, leave a comment below and tell everyone about your experience.

What other colors have you found multiple uses for, outside the basic base coats for similar colors?