Replacing the Fury of Dracula Figures 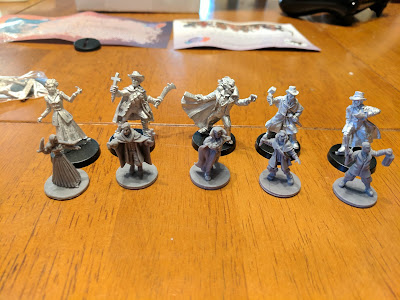 In recent years I've found myself leaving the video game scene and getting more and more into board gaming. I've also always been a big fan of Dracula, and things Dracula related. So when I discovered Fury of Dracula from Fantasy Flight Games, it was a no brainer that I was going to enjoy this game.

At the time I never bothered to get my own copy, but when Games Workshop and Fantasy Flight ended their licensing agreement, Fury of Dracula quickly became a must buy before it vanished into mist, forever. 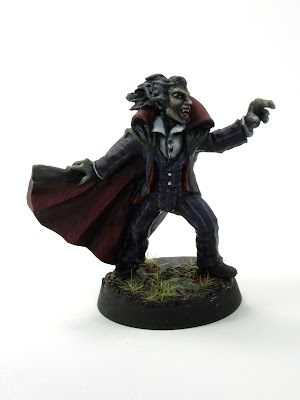 The game acts as a sequel to the original Dracula novel, by Bram Stoker, and sees the Count reappearafter his defeat years prior. Mina Harker, Dr. Seward, Lord Godalming and Van Helsing return to hunt him down and end his trail of terror once and for all.

Over the course of the game the player controlling Dracula moves from city to city across Europe, laying traps, creating vampires and generally being a huge douchebag. He does this all secretly, laying cards of each city he's been to on the board facedown. Meanwhile, the players have to search towns and try to uncover his trail, without any information to start on.

If they find him, they can fight and possibly kill him and win the game. If they don't manage to kill him before the influence track reaches 13, Dracula's grip on the region tightens and he wins the game. 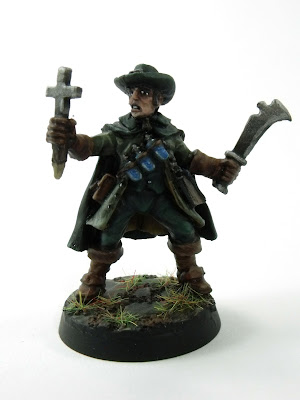 I absolutely love this game, and playing as Dracula in particular. There is nothing more fun than
watching the players try to deduce my moves, while trying to stay ahead of them. Watching their faces twist in anguish when you outsmart them is pure joy.

I've always wanted to paint the miniatures from the game, but at the same time I'm not a huge fan of the sculpts. They are small and the details are a bit weird, which has lead me to upgrade the minis in it for better models.

I had looked over Reaper's selection of minis and while I could find adequate models for Dracula and Van Helsing, nothing else really looked all that great to me. I dug around other places as well, with no luck at all. 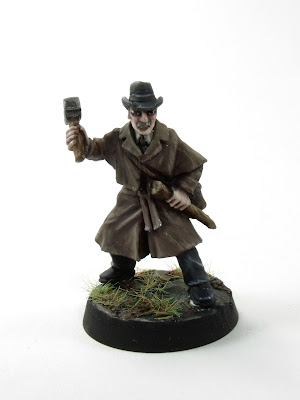 In this Kickstarter, there were minis for heroes, villains and of course Dracula himself and they all fit the bill nicely. So, I hopped on the opportunity to
kick in for them, knowing that I would be using them exclusively for Fury of Dracula.

During the KS I only backed it for the heroes pack and Dracula. I didn't really need or have a use for the others and I still have one female hunter going unused, because she didn't fit the look of Mina. But the witch on the other hand, was a perfect fit.

For the most part, I was happy with all of the minis and they fit their roles fairly well, except the one I dubbed "knife guy". Knife guy had a full beard and I didn't really care much for his hat. He seemed to fit more at a Quincy Morris model, than a Lord Godalming.

But the model that seemed to fit better, face wise, for Lord Godalming was carrying a bastard sword and I wasn't a huge fan of that either. 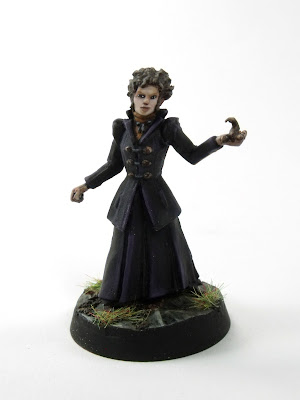 So, after a bit of internal debate, I decided to do a head swap and cut off knife guy and sword guy's heads.

After a bit of green stuff work, the new knife guy turned out really well and I'm fully happy with him now. I actually think he's my favorite of the hunters too, with Mina in a close 2nd place.

Dracula was the first to get painted and I tried to keep him to the classic color scheme of a black suit with a red interior to his cape.

After he was mostly painted, I decided that I didn't really like the plain black suit and went with some purple pinstripes to give it a bit more character. I also didn't like how purple the inner cape came out, so I gave it a glaze of Mephiston Red to dial it in. 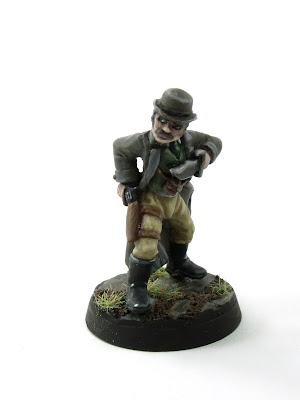 Each of the characters were painted along the lines of their artwork on their respective character cards. Dr. Seward was in green clothing, Van Helsing in light brown, Mina in a black dress and Lord Godalming in grey. I'm fairly pleased with how they all turned out, but Dr. Seward is a bit too green for my tastes and he reminds me of a hobbit for some reason.

One thing I didn't notice originally, was that the witch mini was holding a scorpion. When I first looked at it, it looked like fire to me. Then after getting it primed I realized what it was. It's a little odd, having Mina holding a live scorpion, so I painted it up like a brass statuette instead.

For the bases, I wanted a kind of cobblestone look, luckily I had a polymer clay stamp that I could use to make the effect happen... except it stamped backwards. Because of this, I made a press mold of it and then stamped bases the following day.

The bases turned out ok, but not as nice as I would have liked. Eventually I'll invest in some actual green stuff rollers for doing these kind of effects. But since this is mostly a board game project, I'm not super worried about it not looking perfect.

That's pretty much it! Sometime this month we will be breaking it out for our annual Halloween game night. These will make the game really pop!