In a bid to get more folks watching us stream miniature painting on Twitch, Sophie and I came up with the idea of having an event where we face off against each other painting miniatures with the Testors' white handled brushes.

I believe I originally joked about it once before while we were reminiscing about ye olden days of  when we started miniature painting and then in usual Sophie fashion she made it better by suggesting we get drunk while doing it.

The idea kept getting kicked around for awhile and we would keep saying "we really should do that", but either of us brought the brushes or made any attempt to bring the idea to reality.

So I took the initiative. 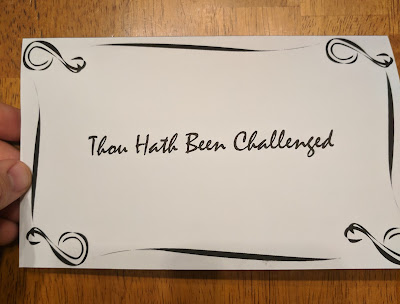 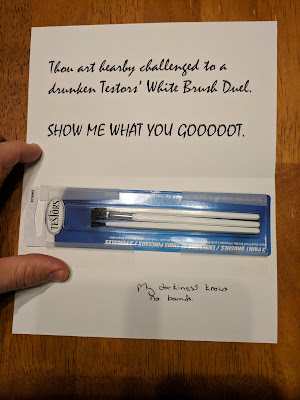 A few weeks back, I had to run for pet food, groceries and a few other things and while I was near Hobby Lobby I decided to swing in and pick up some Testors Dullcote. While I was there, I saw the brushes hanging on the shelf and said, sure why not, and picked up two packs of them.

When I came home, I hopped on the PC and started messing around in Adobe Illustrator, making a simple card to really sell the joke.

She had no idea that it was coming either and when it arrived we scheduled the event for the following Saturday.

In preparation we took to to the Twitters and set up polls asking our followers which models we should paint.

Sophie went with either the Stormcast or Darkoath Chieftain from Warhammer Quest: The Silver Tower. While I ask which of either a Skaven Poison Wind Globadier or a Deathwing Terminator should be my victim.

With our models chosen, it was just a matter of picking our drinks of choice and waiting for Saturday to arrive. I decided to go all out and brought along some Dragon's Milk, a bourbon barrel aged stout beer that is about 11% alcohol. I'm not sure what Sophie was drinking other than "beer".

The plan was to start pregaming around 7pm to give ourselves enough time to really "get into character". Around 6 I started getting things ready and thats when I realized that I couldn't find my brushes...

Panicked, I looked everywhere and had no luck. So I made an emergency trip back to Hobby Lobby and got a new set of brushes, making it back home just before 7pm. I quickly threw together my streaming rig and got ready to hit launch, and then I started my night with a couple Ichabod pumpkin ales from New Holland Brewing.

15 to 7 rolled around and it was time to get started. Both suitably tipsy we went over ground rules and I helped Sophie make sure her sound was loud enough. We then started our call and got ready to go.

Soon the night was in full swing.

Beer was drank, minis were painted and jokes/ conversation was had. We had a bunch of folks pop in and talk with us too, it was great.

For the most part, we've not had a lot of interaction/ viewers on the Twitch stream, but Saturday was amazing for folks chatting with us. AND it spilled over into Monday's stream as well. That feels awesome and I am super hyped for Thursday's stream now.

The models even came out pretty decent too, and we both were pretty surprised. We were expecting them to look horrible, like a 5 year old had painted them with finger paints. 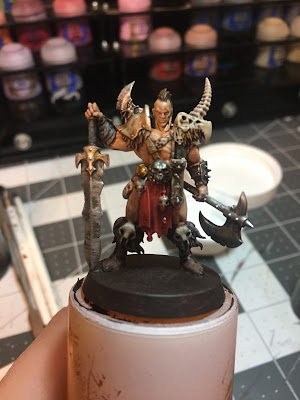 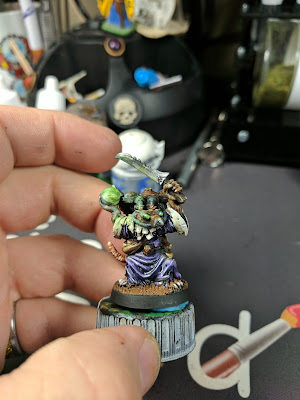 It was a great time, even though the following day was a bit rough. We've since decided to torture ourselves like this once a month and make it a monthly event! Currently, it sounds like we'll be doing it the first Saturday of the month. So keep your eyes and ears peeled for more information on that soon.

'til then, you can catch us Monday and Thursday night from 8pm-11pm est on Multitwitch.tv.
Posted by Scott Ferguson at 8:40 PM
Email ThisBlogThis!Share to TwitterShare to FacebookShare to Pinterest
Newer Post Older Post Home