Miniature Showcase: Frodo at the Cracks of Doom 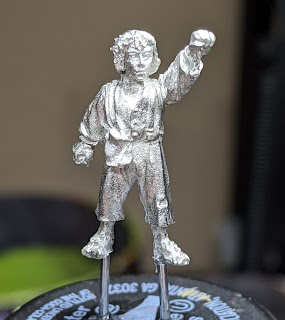 Many, many moons ago, around the year 2000 or so, the Lord of the Rings Strategy Battle Game was released by Games Workshop. This game featured miniatures based on the character designs from Peter Jackson's The Lord of The Rings trilogy, which was right up my alley.

The original range was very impressive and filled with fantastic masterfully sculpted miniatures.  As time went on I would occasionally pick up a few  here and there, though I never got around to buying any armies or playing the game.

Frodo here came in a three pack of models with Sam and Gollum all based on the climax of The Return of the King. I had bought this set shortly after they released, mostly for the Gollum miniature since he was my favorite character in the trilogy.

For a long time I had grand plans to build a small diorama using all three of them. Though in the back then I lacked the skills to make it a reality. Unfortunately, in the intervening years, Sam seems to be been lost o the ages. I've searched my drawers and boxes of stored miniatures and he's no where to be seen. Maybe he walked off with the Ring?

At that point I had decided that perhaps a Gollum and Frodo diorama would be nice to build and was all set to make that happen. But in the end I chose to paint Frodo by himself because sometimes you just want to paint a specific miniature, ya know?