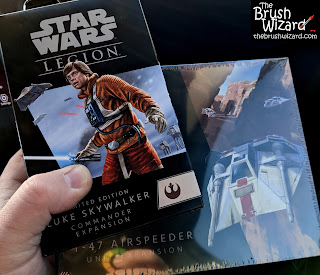 Ever since the Airspeeder was released for Star Wars Legion, I have had an idea for a diorama featuring Luke Skywalker and his crashed snowspeeder from the Battle of Hoth which was featured in The Empire Strikes Back.
Unfortunately, I could never find a model I liked to represent Luke in his Hoth pilot gear. Fortunately, Fantasy Flight Games released a limited edition Luke Skywalker miniature featuring him in that outfit and I was lucky enough to score one from my FLGS.
With models in hand, it was time to get to go wild and finally bring this idea to life.


I believe that's about it! This was a great project and it was fun to try out new things with it. I am very lucky to have gotten my hands on this Luke miniature in the first place, as he's very limited and apparently not even available outside the US.
This project has been in my brain for a long time, so I'm glad Fantasy Flight Games made an official Hoth Luke miniature so I didn't have to try and convert/sculpt my own (it wouldn't have turned out well).
As I mentioned on Twitter, I'm working on writing more this year, so stay tuned. Until then, catch me on Twitter and Instagram. I'm always around and showing off projects that I'm currently working on, there you can see all kinds of things I'm working on as they happen. Hit me up and talk shop!
If you like what I do and want to support the site and my painting endeavors,  you can do so a couple of ways. First, you can toss a couple bucks my way on Ko-fi. All it takes is $3 and it's much appreciated.

Also, you can buy The Brush Wizard shirts and such over on my Teespring shop, where you'll find a selection of shirts and other goodies including a new series of Stickers featuring other miniatures I've painted!