I've been playing around with ideas for the city boards project and I've decided that it'll be best if I start with the Industrial sector first. This will allow me to get the hang of techniques and since the elevated train set is supposed to go on this board I feel like there's already progress being made.

So with that in mind, I started scouting out the industrial areas of Spider-Man Remastered on PS5, looking around the shipping docks and warehouse areas for some inspiration. I think I've decided on a plan of attack now. 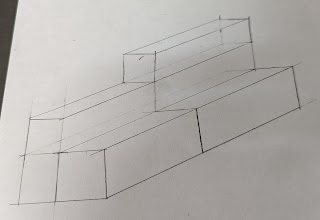 For this section of board, I'll need some sort of warehouse building, a bunch of fencing, probably some forklifts, maybe some pallets/crates and most importantly cargo containers.

A lot of cargo containers.

Luckily, I have an stl file from Corvus Games Terrain that I can have printed. But that's a lot of resin printing and I don't actually need all that many individual containers. Instead, what I plan to do is to have 6-8 containers 3d printed and then making a bunch of stacks of containers using foamcore board and printed paper.

Once I have all of the 3d printed cargo containers painted I can photograph each side and toss the images in Photoshop. After that, I'll build stacks of fake containers out of foamboard, like in the image to the left, and glue the printed images onto them, giving me sturdy play areas and themed line of sight blocking without having dozens of 3d printed terrain pieces.

Of course, what fun is it to have a bunch of non-interactive terrain? The plan will be to have the real containers spread around the table, either alone or on top of the foam board stacks. That way characters can be thrown into them or throw them at their enemies!

So far I've gotten 3 primed and drybrushed and have started working on branding for the sides of them. I have a 4th, which has some damage on it and will need to be repaired before I can start painting it as well.

I've decided to have 6 brands on the shipping containers, to allow for variation. Each will be painted a different color as well, in keeping with the look of the Spider-Man Remaster shipping docks. 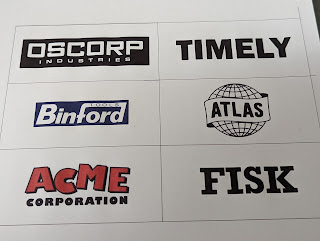 The brands I've chosen are: 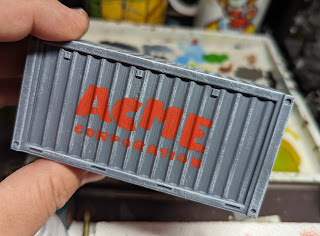 I'm very excited to see all of these to take shape.

I started doing the ACME container as a test run and so far it looks like it'll work out well. I haven't decided if I'll do the black drop shadow or not. I like it being simple too.

After the logos are all painted, I'll do the weathering on it and see if I can do a test run of mocking up graphics in Photoshop.

That's it for now though, Stay tuned, I'll be posting more progress as I go. I'm hoping after the holiday weekend I can get a solid schedule in order for games are my FLGS and getting the community here to grow.

As always, thanks for reading! Hopefully I'll have more to share soon!