In my previous update, I had mentioned that I was working with my FLGS on getting Marvel Crisis Protocol gaming days going at the shop. This has sparked the need to design a table layout that would work either as four individual play areas for game days or as a connected mega table for special events.

For my current games, I've been using a city streets map from Mats by Mars, which is really cool and is marked with positions where tokens are supposed to be placed. So it makes set up easy, but players need to be able to measure their token placement properly for games that don't use these style mats, and it feels like it has actually hindered my learning of the game as far as token placement goes.

Also, if you've been around for awhile, you know that I like to dream big and that it was only a matter of time before I started looking at modeling opportunities. When we started talking about having gaming days at my FLGS, and I started working on a collection of terrain to bring to the shop, the time had come. 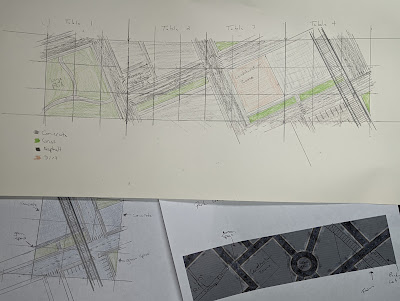 I started trying to brainstorm layouts and was having a hard time with street layout vs empty areas and keeping things interesting. So to help get the hang of it, I took images of the Mats by Mars play mats and stitched them together in Photoshop.
Once I had a rough idea of how things would look, I started drawing out copies of the photoshop image while making modifications.
This worked out pretty well, but I wasn't 100% happy with the layout. In my head I envision four separate boards each with a different theme, but tied together by streets and adjoining scenery.
But, first I needed to come up with a different street layout, one that I could divide up nicely and still be interesting.
I have been using Spider-Man Remastered on the Playstation 5 as reference for what New York streets look like. So I decided to look up Manhattan on Google Maps. I thought, maybe I could take a screen shot of actual NYC streets it would work out for a layout.
Unfortunately, real world spacing doesn't translate well to a game board, especially NYC's wide streets and large blocks of buildings. But, returning to the idea of using a video game city could, especially if it was one from an older era with less surface area.
That's when I had a new idea.
I could take the streets of Grand Theft Auto 3 and use them as a basis for a street layout. There had to be something that would work out well for it.

The first attempt at this idea had me using the park area of Staunton Island as the centerpiece of the boards. I chose this area, because I am a big fan of green space. But it would have taken up  nearly two full boards and it kind of killed my dream of having individual board styles represented.
Also, the left hand board would have been too busy with the elevated train on it as well and multiple blocks of buildings. I tried to make it work for a few days, either by changing sizing or merging some areas together. But I grew to dislike it the more I tried to modify it.
After fumbling around with it for a few days I decided to scrap that iteration and look at different parts of the GTA3 map, specifically areas where I could have one large area near the middle if possible. Eventually I settled on an area of the Portland island of GTA3's map, the area you start the game in.

This section seems like it will work out really well. It gives me a Park, a Residential District, a Construction Zone and an Industrial area with the train. The right hand side sort of suffers from the same issue I had with the previous one, but the long block in the middle seems more managable. Especially if I can find a nice warehouse style building or merge the upper most block and middle block into one large storage yard.
For now, this is as far as I've gotten in the concept department. A lot of my time lately has been spent on YouTube researching model railroad city building techniques and other videos about making urban terrain. I have some ideas stirring in my brain on how I want to go about things now.
Hopefully soon I can start actually messing with materials. Progress on the game board side of things is likely going to be slow, due to real life responsibilities. But the biggest hurdle is collecting enough terrain for events to get rolling, since this whole thing is coming out of my own pocket. We'll see how it goes, I've had good luck with 3d prints for some things.
That's it for now though, I'm excited to get this project rolling and getting the local community to flourish! Stay tuned, I'll be posting more progress as I work on this one. If you'd like to help out with it, you're more than welcome to toss me a Ko-fi, or if you'd like to help out with on the Terrain front I have an Amazon wishlist of various kits we need for events. Also, if you'd like to help out with printing buildings or some terrain, hit me up on Twitter.
Posted by Scott Ferguson at 10:13 PM
Email ThisBlogThis!Share to TwitterShare to FacebookShare to Pinterest
Newer Post Older Post Home