Haven't posted much lately, because I've been working on Caverns of Roxor, doing house remodels and hunting down a mouse/ deep cleaning the house. But I've made some good progress in the expansion pack though and thought I'd share it.

Since they are turtles, and I have 4 spawning points, I decided that it would be fun to paint  them up in the Teenage Mutant Ninja Turtles colors. So we have Orange, Purple, Red and Blue glow coming off of each of them. 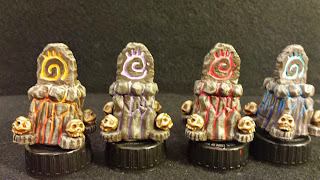 The original plan was to paint up the turtles as close to the original TMNT toys colors as possible. So the Crusher is painted in a green similar to Raphael, and the Bombardier is similar to Donatello. But, not as close as I would have liked. 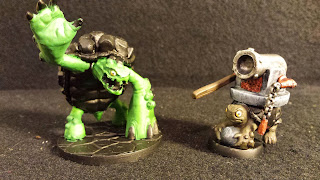 The Rollers were colored in an attempt to be similar to Leonardo. But I couldn't mix the color as close as I originally would have liked. So at this point I stopped trying to get similar to the TMNT toys and went with the mix I already had. The biggest thing was keeping them from being too close in color to the Crusher. This is an early, base coat photo. I've since done the highlights and eyes on them as well. 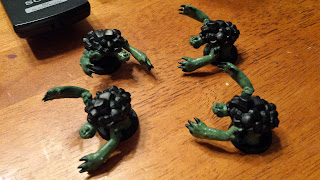 At this point I had decided that mixing paint and trying to match the TMNT toys wasn't working. Plus, there are 12 of these guys and getting the mix correct, with the amount of models, wasn't going to work. So I had some oldish Turquoise  paint laying around and mixed in some matte medium and water. I like it, and it keeps the theme of having all of them different skin tones as well. This is also an early picture, I still need to do highlights on them and paint the eyes. 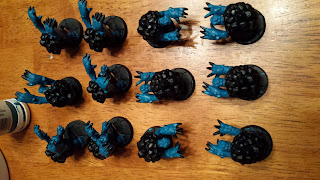 That's all for now! The plan from here is to finish the Slowpokes, then paint all the shells the same colors. I'll be going back to the TMNT toys for this and using a color similar to their shells. This means I'll be painting all the turtles, plus the shell markers in one go... yay.

But once it's all done, I move on to the Fireflow Denizens. That should go quick, since I'll be painting all the fire effects simultaneously. Then breaking them into groups for details.

After that, it's on to what I can paint of Van Drak. But I'll only be able to paint half of that expansion before Forgotten King arrives. Because I have to paint all models from a spawning point at the same time. And the KS includes extra Rattlebones and the Pumpkin Patch spawning point.
Posted by Scott Ferguson at 11:19 AM
Email ThisBlogThis!Share to TwitterShare to FacebookShare to Pinterest
Newer Post Older Post Home