Starting today, I'm going to start posting old (or new) pictures of old minis I've painted over the years. Both to keep posts flowing on a weekly basis, and also to show off old stuff from years past. Some of it is good, some of it is bad. But it's all things that have been learning experiences.

So without further ado, welcome to the Brush Wizard: Throwback Edition! 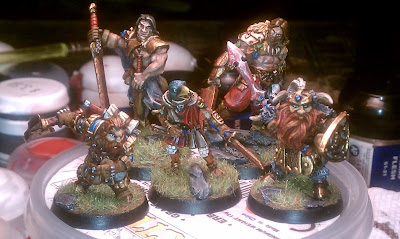 Today's miniatures are the party for our last RuneQuest campaign. This party consisted of two Humans, 2 Dwarves and a Duck. This was one of my favorite times playing RuneQuest, and some crazy shit happened during the game.

I painted the entire party and did conversions where needed. The dwarf on the right was originally wielding a warhammer and the duck was a birdman with wings which I removed. The bases were all crafted to match as well.

This was one of the last times I've painted our party members. I converted and painted a few new party members afterwards, including a new one for me and one for my cousin (more on that later).

But, this was the last party I painted for the group. Shortly after, we started playing Pathfinder instead. But we've stopped playing in person, due to schedules, opting for Roll20.net instead. I've painted up minis for my own characters, such a Silas, but not a whole party.

I really miss playing around a real table. Hopefully one day we can play in person again. There is nothing like having minis on the table and dice flying.
Posted by Scott Ferguson at 4:45 PM
Email ThisBlogThis!Share to TwitterShare to FacebookShare to Pinterest
Newer Post Older Post Home