Work continues on The Great Cyclopean Gemstone Heist. The base is mostly all set to go now. It's mostly all built and the light is mounted into it.  But that's not all, I was able to get the thieves painted as well! Prepare yourself for to be inundated with pictures, 'cause this project is a-rollin'!

The base was crafted out of a piece of 5" x 1/2" poplar which I cut down 8" long and then used the last pieces to make the sides and front. These were all attached together using wood glue and clamps. No screws were used at all, as I didn't want to worry about filling holes.

After 2 days of gluing and clamping, it was time to get started on laying down the flooring. I knew that the museum would need to have some
kind of fancy flooring, so I decided to make it look like a hardwood plank floor. In order to do this, I used 1/4" wide hobby sticks and super glue to hold them into place.

The plan was to lay down two different colors of wood, one cherry and one mahogany. In order to pull this off, I placed the cherry sticks on the
base first and stained them on the base. This went really quick and I think I had them put in place in about an hour.

The following day, I stained and cut the mahogany sticks and glued them into place. This took a bit longer, and should have taken even longer than it did. But I got excited and couldn't wait another day. From the time I stained it, until the time that the last piece was cut and glued down, I'd say it was about 3.5 hours worth of work.

The end result came out really well! I'm really happy with it, especially after I sprayed it with gloss varnish.

After the sticks were set and the varnish dry, I needed to mount the LED
light into place. Originally, I wasn't sure how I was going to go about it. I figured that I would need to fabricate some kind of cradle for it with a latch to hold it in place.

That's when I realized I could just use some extra wood, cut a hole in it, glue it into place and then hot glue the light into the hole! Genius. It 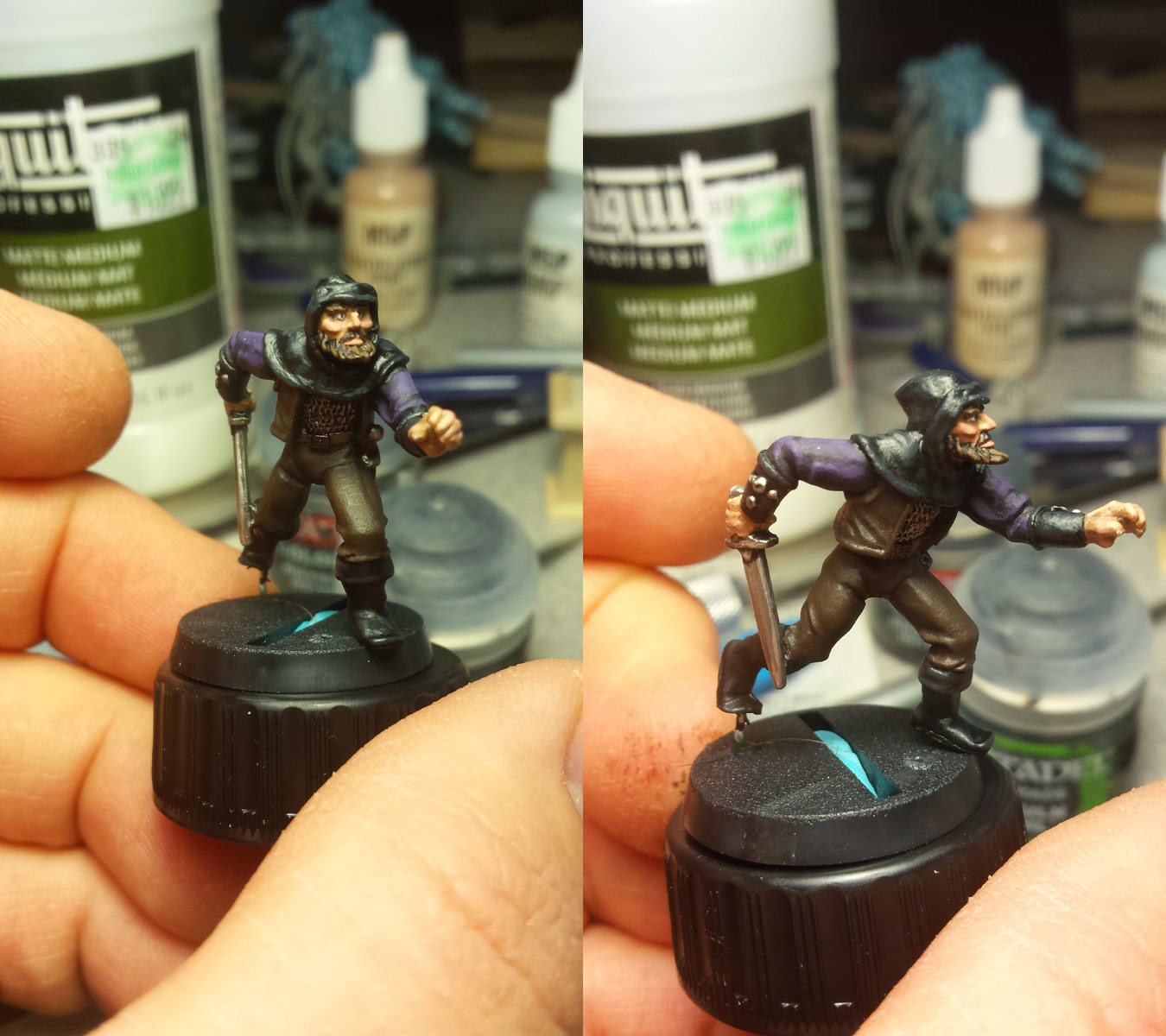 worked out great too and since the LED has changeable batteries, I don't have to worry about removing it. Unless the LED goes bad, anyway.

I didn't have the parts I needed for the wall yet though. So for a few days work on the base stopped. Instead, I got to work on painting the thieves. 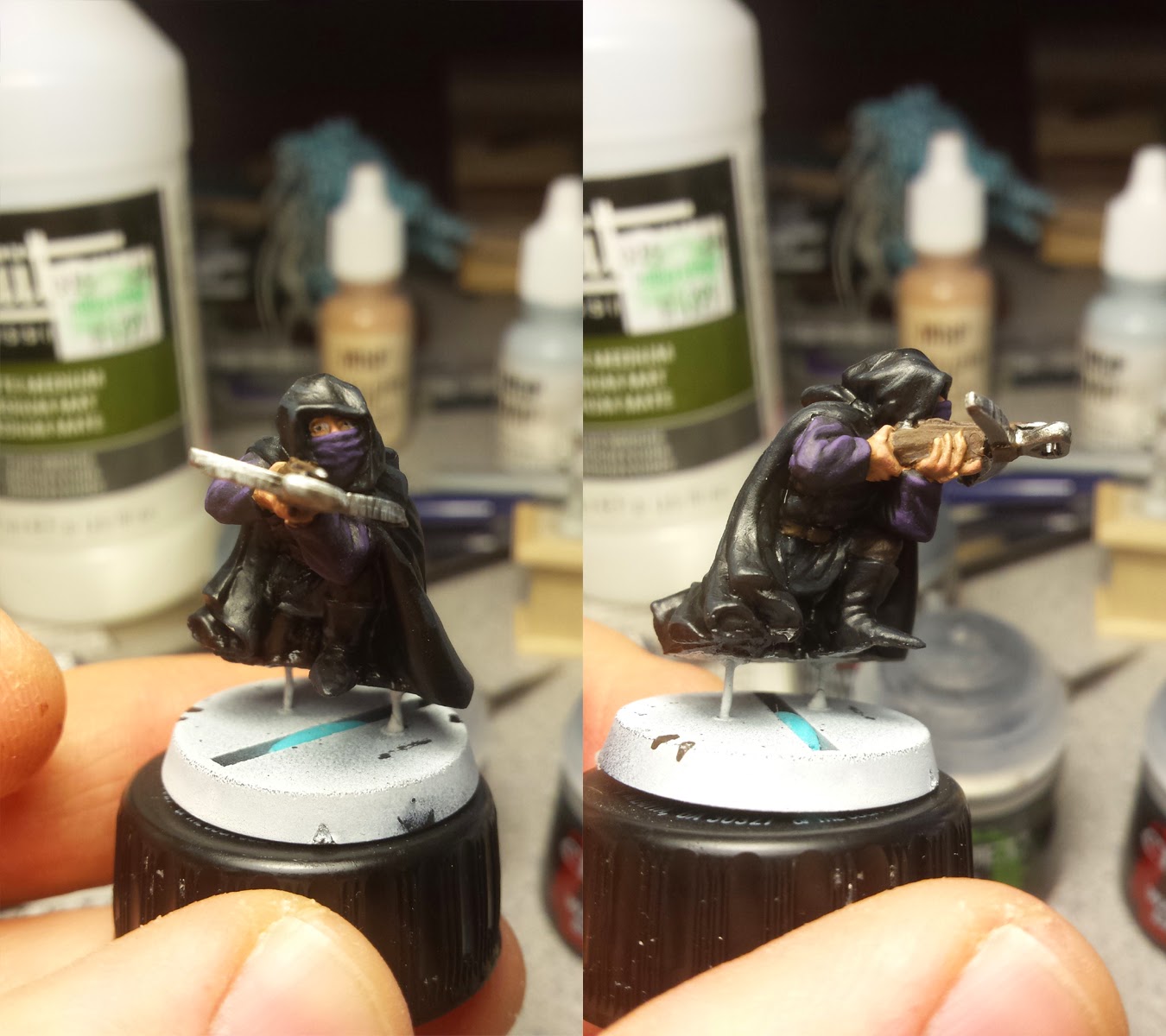 I've been working on keeping my colors a bit brighter lately, because a while back I realized that I had a tendency to make them too dark. For these guys I knew that I needed to get back to darker shades and settled on black, grey, and dark brown. But I also knew that I needed to add a bit of color to it, so I went with a dark purple for their shirt sleeves.

I also attempted to try a few different techniques when painting their skin. I started with a tan color for a base, and followed it with a more

pink tone for the face and parts of their hands (mostly the knuckles and part of the back of the hand). I would highlight the tan first and then follow up with a pink highlight and so on. I actually think it turned out great and they are possibly the best skin jobs I've ever done.

It's really a shame that you won't be able to see the standing thief's face without turning the finished piece on an odd direction.

After the thieves were finished, I was able to get a piece of wood to use for the back wall. I cut it 8" x 9", which gives about 5 1/2" visible from
the top of the floor.

I also took the wood for the busts to work and cut new ones. After a solid few hours trying to hand cut them with my miter box and hand saw I gave up. I just couldn't cut them square. So instead I dropped them into the miter saw at work and knocked out a few pieces.

The next step was to trim them all out. Using my miter box and some balsa wood I trimmed them all out with a little bit of molding. Based off of my test piece, I knew exactly how I wanted to do it.

For the top molding and the upper molding of the pillars, I worked with it removed from the base. But, for the lower molding I knew that I needed to keep it from having a gap. With that in mind, I covered the base with wax paper and worked with it on the base.

It wasn't really that hard, just time consuming. Between measuring for placement of the wood blocks and trimming them out, I sat through a couple of 007 films.

I'm really liking how this is moving along. It's definitely going a lot faster than The Keeper did, even with all the wood working. I've since started painting the wall and if all goes well, I think I could have this project wrapped up within the week, if not the next few days!