After painting the armor all rusty, I took a break from Von Drakk Manor and did a new display piece. But now that that's done, I can get back to work on these fellas. I started out with the eyes and then moved on to the bone color. So far things are moving along nicely. 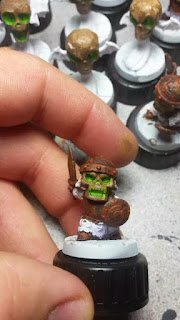 The eyes were painted with Warpstone Glow, followed my Moot Green and White in the center. I didn't like the white though, so I glazed over it with some Moot Green, and if gave it a little bit of a spooky appearance.

With all of the eyes done, it was time to get started on the Bones.

Over the years I've had varying success with bone colors. But thanks to the SDE Base Set I finally found a mix that worked well for me. Unfortunately, the mix used colors from Games Workshop's previous line of paints and I've since run out. Which meant I needed to rework my color choices.

Luckily, Games Workshop released a color chart that compares old and new colors. So I was able to easily reference it and make my choices, without needing to stand at the paint rack for hours. The new colors are slightly different than the originals, but not so drastic that these guys look strange next to my old SDE minis.

So I picked up these colors as replacements. 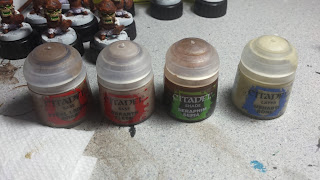 Rather than go into details on how I painted them, I'll be doing a tutorial post soon. Since a lot of folks have complimented me on my technique and recipe. For now, here are the Skeleton dudes with all of their bones painted. 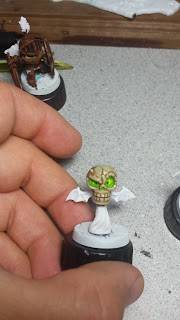 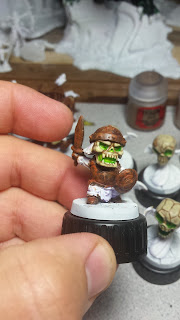 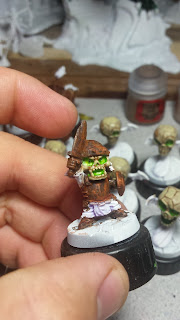 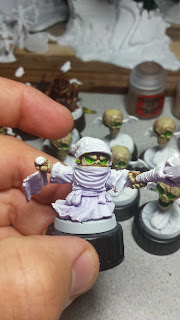 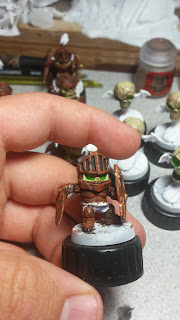 The Rattlebones, Death Spectre and Spawning Points all need to be finished yet. T But I decided to split them into a couple batches to keep myself from going insane. But, I'm making good progress with them.