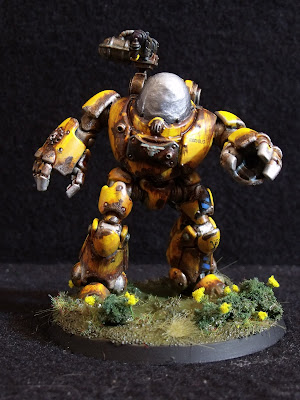 This guy took me a long time to complete, it seemed. I started it on January 6th and he was fully finished onthe 25th. Part of that was because I was waiting on supplies from eBay sellers and another was because I was trying to find a solid way to make the head piece reflective.

I had planned on painting the reflection onto the head myself, but after looking it over and having already been working on him for over 2 weeks, I said to hell with it and went a different route. Instead, I painted the head with silver and highlighted it as I normally would. Then I painted on three layers of Citadel 'ardcoat to give it a nice glossy surface.

The base was made using Milliput, which was then covered with sand. the grass is a mix of Citadel static grass and long grass from Woodland Scenics. After it was all painted, I began spreading the Woodland Scenics Realistic Water, mixed with browns and greens to make a nasty muddy mix. 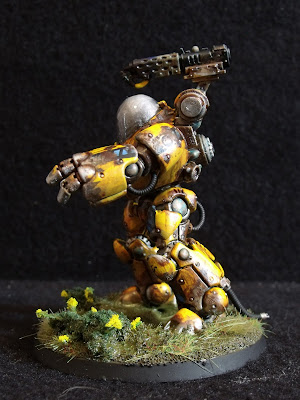 The bushes are made of Woodland Scenics flowers and bushes as well, and glued together. While the tufts of light grass are Mordhiem Tufts from Citadel.

One thing I really wanted to do with this guy was make him look as old as the fluff in the Codex says they are. I really like the idea of the Adeptus Mechanicus finding these and repairing them to make them work again, after centuries of stasis.

The rusting was done pretty much the same what I normally do rust, but with a few added steps thanks to @3dgreg on Twitter.

I also like the idea of each one being slightly different. So on this guy I covered the "eyes" with liquid green stuff to made it one solid dome. The goal is to do minor modifications to each robot I get and build a squad of them that looks like they've all gotten custom modifications to get them operational. 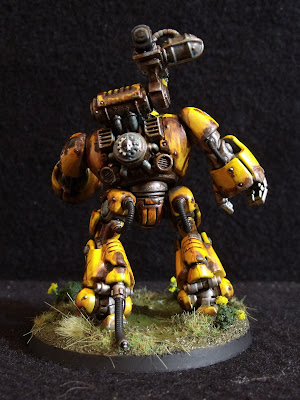 The plan after this guy is to paint up the other robot in the set, but in a completely different color scheme. That one will be fully stock and in a less rusted condition. I'm thinking white and blue w/ some orange accents.

Of course, since these things aren't being built in universe anymore, it'll need some wear and tear too. But not as much as this guy.

I still need to come up with a model number for him. But I haven't done much reading on how they are done in the codex, yet.

When I do, his model number will be painted onto the rim of the base.

But for now, that's one Kastelan Robot finished. He's gotten a lot of compliments as well, which always feels good.

I fear that my AdMech army will never get finished 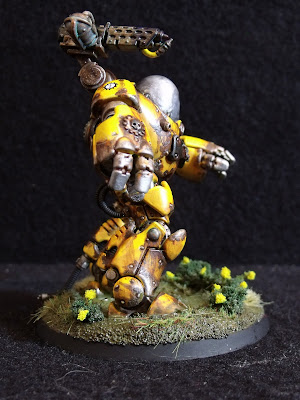 though. I just don't have the ability to speed paint through all of them. Each one ends up with countless hours into them. But I suppose, I'll likely never see a gaming table, so the paint job quality should offset the lack of play time.
Posted by Scott Ferguson at 11:15 AM
Email ThisBlogThis!Share to TwitterShare to FacebookShare to Pinterest
Newer Post Older Post Home