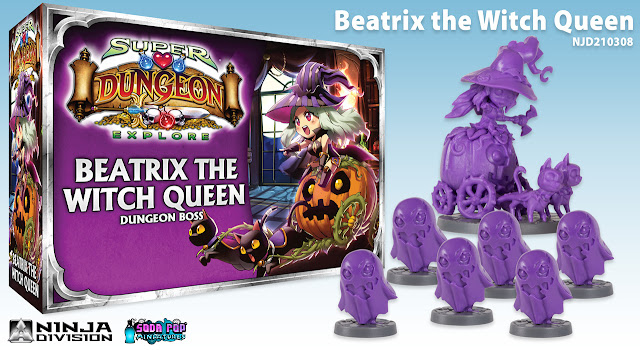 From a game play stand point, she looks kinda nasty!

Beatrix has 8 Hearts and 7 Movement. She also get 4 Action Points per round. She can basic attack in melee for 2 red dice and at a range of 8 with magic for 2 red and 1 green die. But her defense is onle 2 stars and a red die.

She has a new keyword ability called Ghostmancer. With it, whenever she deals a wound to a model, she spawns a ghost creep adjacent to the wounded model. Evil!

She also has a keyword called Kitty Claws, which lets her attack any enemy model that moves adjacent to her during their activation. Which means, if you close in on her, she gets to swing at you and if she hits, Ghost time! Evil Evil!

But that's not it. Beatrix comes equipped with 3 Potion tokens thanks to her Potion Stash 3 ability. That means she can collect potions as they pop up on her attack rolls.

Those potions fuel two of her special abilities: Pumpkin Charge and Bubble & Boil.

Pumpkin Charge is a Dangerous Melee ability that gives her Charge and Lance 8. If she spends a potion token, she also gains 1 green die towards her STR stat. Lance hits any targets in the 8 squares directly ahead of her and since its dangerous, she can hit her allies too. Then, after its all resolved, Beatrix moves to an unoccupied square that was affected by Lance, basically steamrolling over everyone with her Pumpkin Chariot.

Bubble & Boil is a Dangerous Spell ability that is a Burst 1 and she can spend a potion token to add 1 green die to her WILL stat. With her range of 8 on spell attacks, she can use this to hit a target 8 squares away and anything adjacent to it. It's also Dangerous, so it will hit her allies as well.

Both of these abilities will trigger Ghostmancer as well. So if there is a line or bunched up group of models, she can charge over or nuke them and any that are hit spawn ghosts! Evil Evil Evil!

Her last ability is called Curses! With it she can give all models within 2 squares of her a status effect of her choice. This pairs excellently with the Ghost's special ability, which I will explain later.

Beatrix isn't all nasty evil attacks and curses tho. Her Explore Cards come with some pretty nice bonuses for the players. 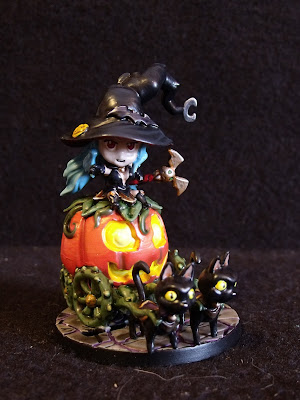 Its not all sunshine and lollipops though, there are still a few trap cards for the Explore Deck. But these effects make it more worthwhile for players to use the Explore action and they may not be as scared to enter new tiles if they know what's waiting for them in the deck.

It's been said the Soda Pop redesigned the Explore Deck for SDE 2.0 when the Legends KS was going and a lot of folks were put off by it. But hell, if things like this are in the new Explore Deck, I'll gladly take it. I've had games drag on with the current deck, because my players were scared of what random shitty effect was going to happen to them.

Onward to the miniature!

She's pretty adorable, and I liked the look of her mini pretty much instantly. But I could tell that she was going to be a bitch to paint. 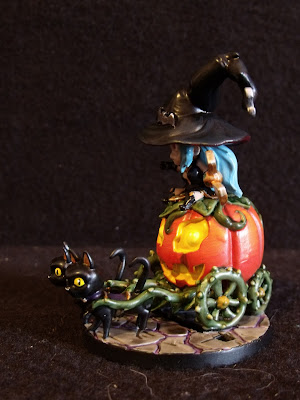 There's a lot of little gaps to paint through and painting her while attached to the base was not an option for me (thanks to how I paint my bases).

I ended up cutting her loose, so I could bend the cat's harness out of the way of the pumpkin. I also was tempted to chop her head off in order to paint her dress more easily. But due to the way she is assembled, that wasn't an option.

Overall she took me about a week of painting sessions to finish and I really like how she turned out.

The pumpkin itself was a fun challenge and I think it ended up looking nice. Though I didn't care
much for the pupils in the eyes .

I originally painted them black, but decided shortly after to paint them a light yellow instead. They just seemed out of place on it and became a focusing point, drawing attention away from Beatrix herself. 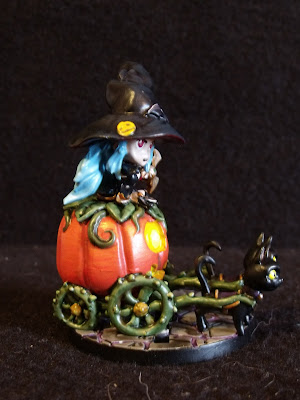 All in all, I really think that this mini should have been a "some assembly required" mini. At least by leaving the pumpkin chariot off the base and be head loose. But I realize that's just the old miniature modeler in me talking. But, I know Soda Pop doesn't plan to ever go back to the build before you play ways of the old days. So, hopefully, things like this case are the exemption and not the rule.

As for the creeps, the ghosts are probably my favorite creeps so far.

As soon as I saw them, I knew I would ha e to
paint them up with glow in the dark paint. Even though they'll never be used in the dark, it seemed like something that just needed to be done.

So after some searching I was able to find some GitD paint at the craft store and got to work. 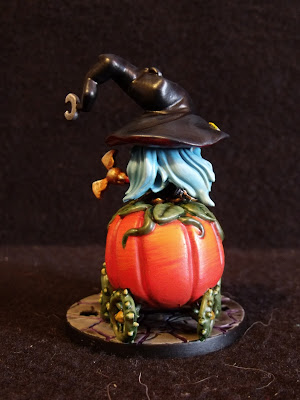 I started out by painting them as normal and then once the highlighting was done, I began applying the GitD
paint.

It took a bunch of coats to get decent coverage. And even now it doesn't seem that even. But it does the trick and they do glow. But it seems like they are picky about how glowy they get. Sometimes it's nice and bright, others... Not so much.

They are a bunch of fun for the Consul to run also. They have an ability called Invade. With it, they merge onto the Hero's card and as long as they are
there that Hero can gain double the amount of status tokens.

This means, that while normally a hero can't have more than 1 of a single type of status effect on them. With an invaded ghost on them, they could end up with 2 Fire, Hex, Bane, etc on them. Making it harder for them to remove the negative effects.

But, since the ghosts are creeps, the Consul is not guaranteed to have them available to harass the Heroes during the spawning point clearing phase.

But once Beatrix spawns, it's game on for ghosts.

Not only does she spawn them when she hits.  When she spawns, Ghosts are spawned for ever downed mini-boss, bone pile token and spent princess coin. That's right, if you have been spending princess coins to resurrect fallen heroes, she slaps you on the wrist for it too.

Luckily there are only 6 ghost creep minis so the amount of ghosts that she can have out is limited. But if the heroes are killing them off, they'll just keep coming back. 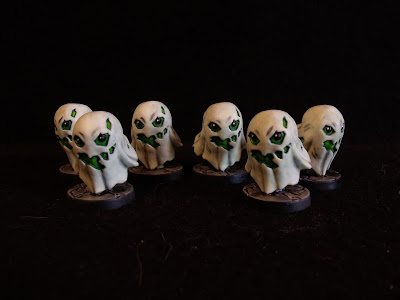 Overall I've really happy with this set. Its thematic, Beatrix ties to her creeps well. She also ties into the use of the Von Drakk Manor monsters well.

The miniatures for Beatrix and the Ghosts are really nice. But like I said before, painting her properly, meant ripping her off of her base and contemplating beheading. But from an ascetic view, they fit right in with the rest of the Super Dungeon Explore line and feel right at home.

The set is $25, which I now think is worth it. When I originally purchased her, I wasn't paying attention and didn't realize the ghosts were in the box. I thought it was kinda spendy for a single boss mini. But a couple minutes later I realized they were in there and $25 for 7 minis is a lot more reasonable.

So that's all for Beatrix. Feel free to comment below, or you can always catch me on Twitter @ryglore and on Instagram. Beatrix is available now at stores and Soda Pop's web store.