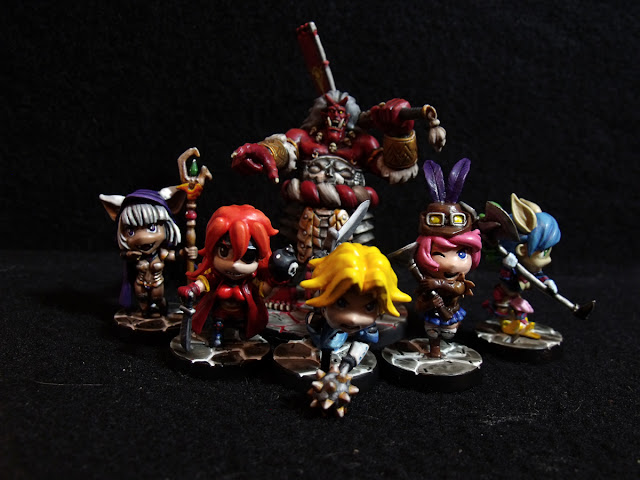 Each of the main Relic Knights are featured here as new Heroes for the Super Dungeon Explore. Except for Kasaro-To, who is a mini-boss instead.

Unlike my other SDE pieces, which are all painted in schemes of my own choice. I knew that, like Candy, I wanted to keep to the official card art as much as possible. I think I was able to stay fairly accurate too. I'm not very good at precise color matching though, so there are some variations in hue. Not really a huge deal though.

My favorite of the group has to be Kisa, the cat-girl mage. While my least favorite is One Shot, which is sad because she's my favorite of the actual Relic Knight models. I'm also not a huge fan of Kasaro-To, but thats because I REALLY liked the original concept sketch of him, which was the same size as the rest and a whole lot more chibi. But he was changed awhile later into the mini we ended up with, mid or post KS, I can't remember.

If I had to place them in an order, it would probably be something like this:

Now lets get a closer look at each of them

That's all of them!

With these all finished, I am now 100% painted on all of the 1st Edition Super Dungeon Explore minis. Now it is time to continue work on Forgotten King, which as you may already know has had some of the minis painted already.

Next up on the paint table is Beatrix the Witch Queen, which I am painting as part of the Finger Painters challenge on Facebook. The theme for February is Females, and she'll kill two birds with one stone. So keep your eyes peeled for that.
Posted by Scott Ferguson at 12:20 AM
Email ThisBlogThis!Share to TwitterShare to FacebookShare to Pinterest
Newer Post Older Post Home