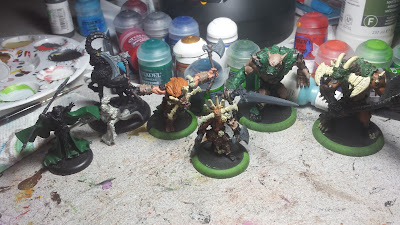 Another commission has hit the table, which you may have already known if you follow me on Twitter. This time, it's a collection of minis from the Hordes faction, Circle Oroboros. The goal of for these is to get them table ready, as some were previously painted or other were just primed.

This set of models includes the Warcasters, Kreuger, Kromac and mounted Morvahna, and the warbeasts Ghertorix and a Warpwolf Stalker.

So far, I've started with Kromac.


Kromac is a two part character and comes as two separate figures. The shapeshifted version of him is basically a larger, more bestial figure, featuring many of the same features. Which means, I need to paint them both at the same time.

That's not really a huge deal though. But I can say that I am not a fan of him, really. Especially his dark leather armor sections.

Here's what's done so far on both.

That's it for now. It's taking a bit longer than I expected it to, but they are slowly getting there. The rest of the set should go faster, since I'll be doing one at a time rather than a pair. Hopefully.
Posted by Scott Ferguson at 6:08 PM
Email ThisBlogThis!Share to TwitterShare to FacebookShare to Pinterest
Newer Post Older Post Home