Its been a long time coming, but I'm finally here with write ups on my entries for the Crystal Brush at Adepticon 2017. Following the convention, I hit a hobby rut and everything kind of just stopped. But I'm back and ready to get back on the hobby horse.

This is the first of two posts about the models and in it I'll be talking about the Tabbybrook Mage from Super Dungeon Explore. 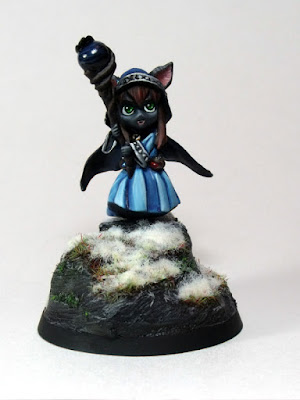 Tabby is actually the 2nd model that I painted for the Crystal Brush. But I figured I'd write about her first for two reasons. The first being that I wrote a lot about the Terminator Captain and the second being that she was actually a finalist in the chibi category!

I chose the Tabbybrook Mage for two reasons. The first, was that I am just a really big fan of the mini and after looking over all of my Super Dungeon Explore models it was the one that called to me the most. The second was that she had a minimum of metal sections on her and I was concerned about my true metal metallics being a negative in judging.

This is the second time I've painted Tabby, the first was for a chibi swap last year. The plan was to paint her similar to that version, because I really liked how she turned out. But as I worked on the dress and robes I realized that I didn't want to do calico again, more on that in a bit. 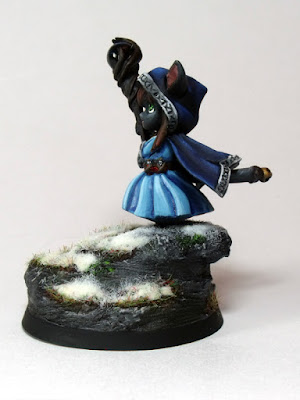 I ended up painting most of her like the previous version, as the blues go along with the type of magic she uses in the game which is water based.

Her dress was painted with Citadel Caledor Sky, which was than highlighted up to Citadel Lothern Blue. I made sure to make each layer as thin as possible while building up coats. After I was pleased with the Lothern Blue, I started adding in Vallejo Model Color White to it for extra highlighting. 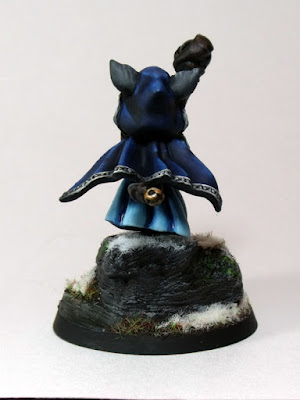 For her cloak, I started with a base coat of black on the interior and worked it up to a dark blue. This was mostly done with mixes of Vallejo Black and Citadel Necron Abyss, I then added in a bit of Caledor Sky to the mix for any highlighted areas.

The exterior of the cloak was painted with Necron Abyss and highlighted up to Caledor Sky. Then I used Nuln Oil in the recesses to deepen the shadows a bit, doing thin glazes to build up the shadow, rather than thick washes.

The orb was painted black and then I used mixes of black and Necron Abyss to highlight it up. I can't remember exactly how I painted it though or which colors though. The streaks on the surface were added later on, as I needed to give it more dimension. 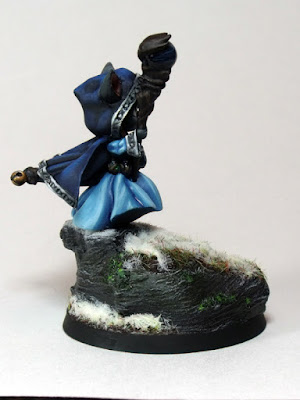 Finally with all of her clothing weaponry painted, it was time to get started on her skin tone. Up until that point I was still set on a Calico color scheme. But after looking it over, I realized that that wouldn't really work with the clothing colors and decided on making her a black/ dark grey cat instead. She would still get reddish hair though because I felt the extra color was needed against all the blue.

Once her skin was finished, I had to decide on an eye color. A lot of the time, I use a color that is complimentary to the main color of the model. But, she would have looked really strange with orange eyes. Instead I went green to go with her hair color.

When all the painting was finished, I sprayed her with Testor's Dullcote and then I painted some Citadel 'ardcoat on the staff orb, her eyes and on the potion bottles. I also added a tiny bit on the metallic areas where light would shine the most.

Her base was made using the same steps I showed in my tutorials for making and painting rocks. One thing I knew I wanted to do for sure was to add some snow to her base, because she has magical ice powers. But I also wanted some grass on the ground to make it more interesting.

With that in mind, after the base was all painted, I glued static grass on to the base and after it was dry I mixed some Citadel Snow with Elmer's glue and globbed it on in sections. Then, while it was still wet, I sprinkled some more on top to give the snow a little more dimension.

And that's pretty much it! All in all, I probably only worked on her for 4-5 days, which would be something like 25-30 hours.

A couple days later, I took her to Adepticon 2017 and entered her into the Crystal Brush. A few of my Twitter buddies saw it in the case and tagged me with compliments when they saw it in there. But, I wasn't expecting anything to come of it. Since she felt rushed compared to the Terminator Captain I had sunk so much time into previously, and I purposefully decided not to do any freehand work on her cape.

Then online voting started and for grins I checked the website out and saw her listed as a finalist in the chibi category. That was one of the best feelings I've had in a while. I stuck around for the awards ceremony to see what happened and unfortunately she didn't place. Which was actually fine with me.

Either way, my whole goal of entering the Crystal Brush was to see where I stood against some of the best. Turns out, I was able to hold my own, proving to myself that I am as good as everyone has told me for years. I'm excited to try again next year and even if I don't place or make the finals, being able to say I'm a participant is enough for me.

I had originally planned on taking her off of her scenic base and mounting her back on her Super Dungeon Explore base. But, I think she deserves to stay intact and be placed in my display piece case instead.
Posted by Scott Ferguson at 8:35 PM
Email ThisBlogThis!Share to TwitterShare to FacebookShare to Pinterest
Newer Post Older Post Home