Adepticon 2017 was an excellent experience and I learned a lot about painting competitions and my own painting. In the months before the event, I spent countless hours working on a single entry for the Sci-Fi Single Figure category. That figure was a Deathwing Terminator Captain from Warhammer 40,000. 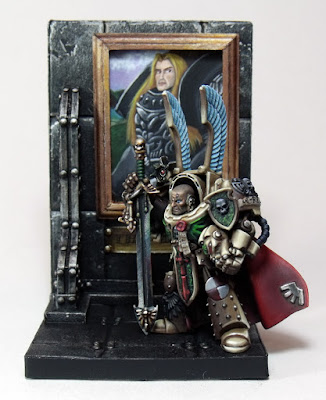 The goal of this figure was to push myself harder than I had previously. With that in mind I decided to do some modifications to the standard miniature, push contrast harder and really just try to do the best job I've ever done.

It all started with a Deathwing Terminator Captain that I had already assembled. Originally I was going to build a team of Deathwing for Space Hulk, but since the rules for them are on an iPad only ibook format I never was able to get them. So, he just sat there in a drawer for 2 years.

When it was decided that I was going to Adepticon for sure, I did some digging for potential models to paint for the Crystal Brush and stumbled back on him. He was fully 100% a stock model though and I knew he needed some extra work. 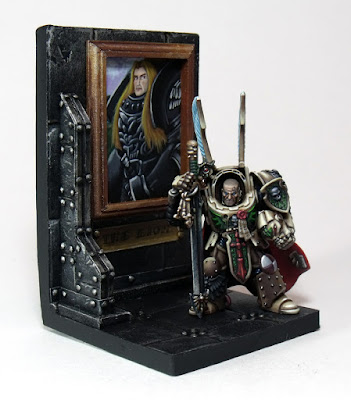 The first thing I decided was to swap his head out, which I pulled from the Kill Team box set. Then, since that head is bare, I thought it might be neat to have him holding his helmet to his side.

This turned out to be a bigger challenge than I thought. The entire left arm needed to be built from scratch and is made of bits from 3 different arms and some green stuff. The hardest part of it all was trying to figure out how to set the helmet in his arm. Eventually that all worked out and it was time to paint. 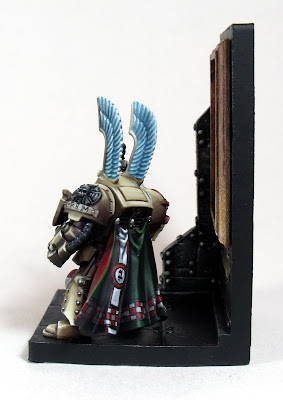 For painting I did something I usually never do, or at least rarely ever do, zenithal priming. Which is priming the model in black followed by a white prime from over head. Each time I've ever done a zenithal prime, I've never noticed it making a difference. But, since I needed to paint him in sections and I had to pay close attention to the way light hits the surfaces, I chose to do a zenithal prime so I could see where shadows and highlights fall.

This time it actually was a boon to have done the priming this way, as it made it easier to see what was what while painting him in sections. But again, I don't really think the zenithal prime did much other than act as a guide.

All of the armor plating was done with mixes of Citadel Rhinox Hide, Steel Legion Drab, Ushbati Bone, Screaming Skull and White. Based on where the part was on the model, the shadows would either be Rhinox Hide or Steel Legion Drab and the highlights would end up either Screaming Skull or White. But white was usually reserved for edge highlighting.

The head was painted with Reaper MSP Tanned Shadow and then using various washes and glazes the skin was finished off. His is one of the best faces I've painted to date and I even managed to give him some really good eyes. The best part though has to be the stubble on his face and head. 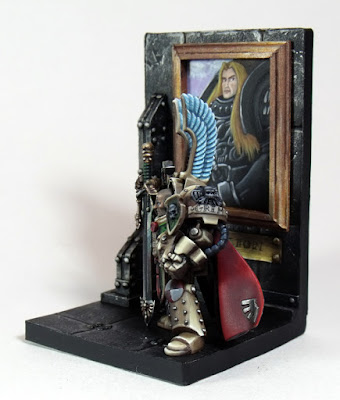 I had a  hard time deciding what to do with the cape. But finally went with a red interior and green exterior. I knew I would need to freehand a design on the back of it, but was slightly intimidated and also unsure on what to put on it.

After looking at a bunch of banner images and 40k artwork, I went with a simple stripe and checker pattern along with a "1" for the First Company. This is mostly because I felt like I was running out of time, which is funny because afterwards I freehand painted an entire portrait for the background. 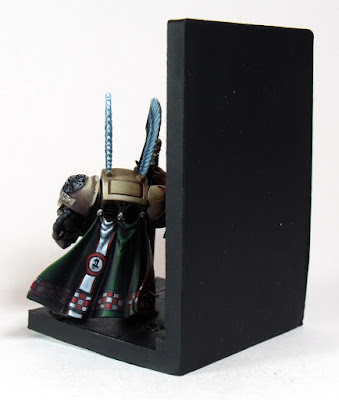 Speaking of the portrait, I am super pleased with it. But it was a source of anxiety when I first started on it. Then I talked to my friend Kelly and she gave me some tips on painting recreations that really made me look at it differently. She said not to look at it as a bunch of shapes and recreate the shapes, and it will turn out closer than trying to draw it as a drawing.

Turns out that's all I needed to get the ball rolling and after sketching it all out, I began painting it all in sections.

The base itself is made of foam core board, cardstock and a bit of wood. the rivets are actually pin heads and there are well over 100 of them on the model. While the frame for the portrait is actually made of doll house trim moulding.

The metal panels of the floor and walls were painted with metallic paints and I tried to push contrast on them as well. But I didn't want it to be so bright that it made the space marine hard to see. That could have been a mistake, since it and the frame of the portrait are not up to the same level of painting as the model itself.

Overall, if I had to guess, I'm thinking there's something like 100-150 hours into this miniature. It took a long time, mostly because of the way the armor plating it painted, but also build time of the base and painting of the portrait.

Does that seem a little insane? Maybe. But I am also a guy who spent like 40 hours painting around cracks in crackle paint.

When he was finished, I carefully packed him up and entered him into the Crystal Brush at Adepticon. Over the course of the weekend I'd end up receiving a lot of compliments on him. Even a few going to far as to call him good enough to make finals.

But, alas, he did not make it to online voting. There were a lot of great models in the Sci-Fi category and the competition was rough. Once online voting had started and I saw he wasn't in there, I felt slightly bummed. But I've got good friends and they all helped me think of it in a positive light.

Later that night, I bumped into Duncan from Warhammer TV. I had spent the better part of the weekend trying not to bother the Warhammer TV guys, but I happened to walk past him and politely said "hi guys" as I walked passed and Duncan replied back with a "how is your weekend", so I stopped and we chatted for a bit about painting and such.

He asked what games I play, and I replied that "I'm just a painter, really" and mentioned entering the Crystal Brush. He asked what I entered, so I showed him the Tabbybrook Mage and we talked about he chibi style for a bit. Then I showed him the Terminator Captain and he replied with a "That is fantastic"! When I mentioned that it didn't make online voting for the finals, he was mentioned how he was surprised that it didn't make it, and that it was really good.

I honestly never should have felt depressed or anything about not making it with this guy or whether he was good enough. There were some really good models in the case, and during the entire WIP process he'd gotten more likes across my social media than anything I'd ever done.

But, I guess it's more about getting a feeling that what you've sank your soul into not performing how you were expecting it to, that got me more than anything. While I was working on it, all cylinders were firing and it felt like I was working on the greatest piece I'd ever done. So, I suppose it is only natural.

When I got back from Adepticon, I decided to take a bunch of pictures of him and submitted him to Games Workshop's White Dwarf magazine. I got a reply from them saying they submitted it to the designers in hopes that it came be featured. Fingers crossed on that one.

But, now it's time to do something new and look to the future. There's big ideas in my head and I need to get them out.
Posted by Scott Ferguson at 8:56 PM
Email ThisBlogThis!Share to TwitterShare to FacebookShare to Pinterest
Newer Post Older Post Home