A few months ago, I decided it would be fun to make a custom Tech Priest Dominus to lead my
Skitarii. I originally had an idea of making him on a hover saucer, but that idea quickly collapsed when I realized the bits I had on hand were too small to believably carry all the gear the Dominus has.

Slightly put off by that revelation, I set it aside and went about other projects. 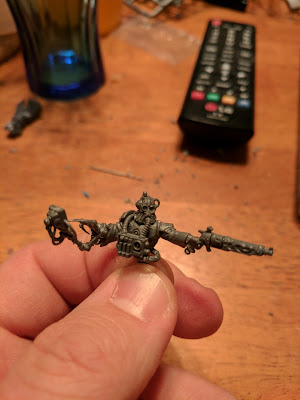 Well, last night while looking through the Imperium 2 Index, I realized that I made a huge mistake in my army list. I misread the Tech-Priest Enginseer entry and thought they were an HQ unit, turns out they are Elites.

This meant I would need at least 1 Tech-Priest Dominus, but I had already started making my second custom Enginseer with the Dominus' power axe and chopped up the one model I had.

That's when inspiration struck and I decided to make the torso I had already started on into a centaur.

I had also thought about doing a man-scorpion with his heavy weapon or axe attached to the "tail" but since I didn't have adequate bits for it, I canned that idea. 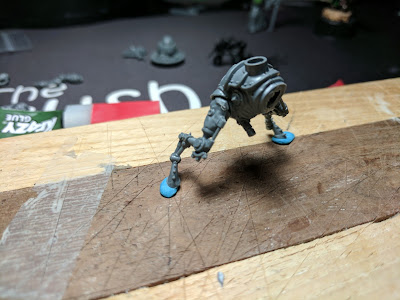 I had actually had the idea of a centuar Dominus a couple months ago and had bought a pack of loose Sicarian Ruststalker legs for it.

They are awesome bits and seemed like the perfect legs to use for the idea.

When I first started on the Dominus while building the torso, I hacked up the upper body of the original Dominus model. I had thought of using it in some capacity or another, but I wasn't 100% how I was going to use it.

Turns out, it made a perfect lower body and the four arm joints fit nicely for possible leg points. 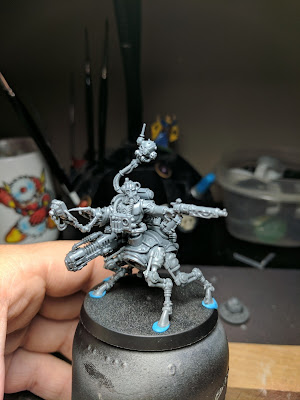 With a little creative cutting and filing, the first two legs were fit into place. The options for legs were pretty fun to mess with, but I really liked the idea of the rear legs being spread out and bracing the figure.

The front legs ended up being a bit more of a challenge. Not so much the front left leg, but more so the front right one.

But with a bit of modifications it all came together pretty easily.

The biggest issue was getting them to all sit on the ground correctly. It was especially difficult with the first two.

Once the lower body was finished, I got to work mounting the Volkite Blaster. That proved to be a major puzzle. 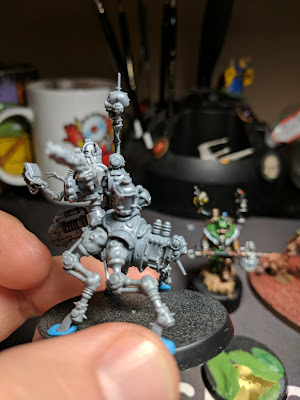 I had to find a backpack that was suitable for it.

After digging through what little of a bits box I
have, I finally ended up using the Tech-Priest Dominus backpack and attaching the heavy weapon arm to that. I think it turned out OK.

The rear of the lower body, being the torso of the original Dominus model, had a collar on it. This is where the head of the Dominus would normally have been.

I thought about using green stuff to round it out, but then had the idea to have mechanical bits coming out of it.

For this I took the other big gun option and hacked it all apart, because I really liked the main body of it. I originally intended to leave the large telsa coil on it too. But after test fitting, it looked odd, so I cut it off.

But the thing still looked off and I needed a piece to cap off the "butt". That's when I remembered that I had cut off the loudspeaker off of the Dominus' axe when I was converting the Enginseer. So, on a whim I said "why not?" and glued it on.

That's as far as I got on him last night. From just having the torso to this point, I worked on him for a solid 3 hours. It's been a blast so far and I can't wait to continue working on him.