Taking a bit of a break on my Skitarii army and working on a new chibi. But this time, I'm going full on custom and attempting to make a Skitarii Ranger out of a Ninja All-Stars mini! 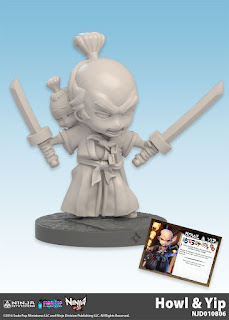 It's going to be a fun challenge, for sure, and so far I've made decent progress after only one night. There's a lot of work left to go, and I doubt I'll have him finished before GenCon. But I am going to see how far I can make it before I leave.

I knew I'd need a model as a basis and after looking over the Super Dungeon Explore models I had on hand, nothing looked like it would work.

I then went to my Ninja All-Stars collection and started looking through the Ronin, since they are single releases and I can easily replace anything I use.

After a bit of digging and looking over minis, I decided on Howl & Yip at the basis for the head. Mostly because he's bald and would require less clean up.

So, I lopped off his head and went to work. 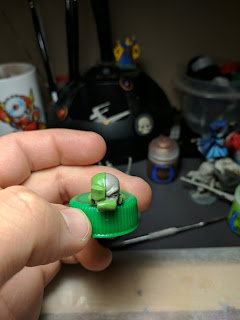 The first order of business was to do some clean up work and get rid of all of his hair, as well as one brow ridge. The plan was to have half of his head cybernetic and the other half human.

With that all done, I got to work laying down the basic shapes of his respirator, cybernetic eye and the metal side of his head.

I wasn't sure how to go about it all and just started playing around with green stuff, making shapes and such. 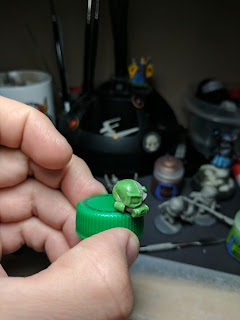 After the basic shapes were down, I thought I was done for the night, but I decided to try something and added a ridge to the metal "scalp" with my sculpting tool, then using a flat color shaper tool I deepened the line I had drawn and shaped the edge of the green stuff back into place.

Then I decided, since that worked out well, I'd try doing the eye. So I did the same thing and just worked the area with the flat and coned color shaper until I was
happy with the depth of it.

Feeling rather proud of myself, I then tackled the respirator and cut in for the center section of it, then using the tip of the flat color shaper I made horizontal lines and deepened them with the tip of the coned shaper.

Finally I added in some lines on the outside edges of the respirator and side cylinders and added a little rivet detail to his forehead.

I had tried to add the third cylinder to the rear of his head, but it didn't want to stick, so I gave up on it for the time being. 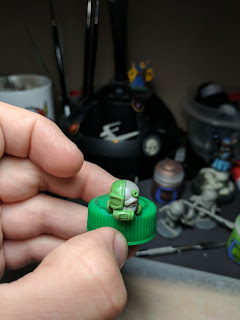 That's it for now. It's turning out to be a fun little project and I couldn't have done it without the tools Sophie gave me. Those color shapers are a godsend and instantly upped my sculpting game.

Next up will be the third cylinder and the hoses for the respirator and maybe the hood. We'll see what happens. I can't wait to get back to work on him tonight. Be sure to check Twitter and Instagram for progress as it happens!
Posted by Scott Ferguson at 1:08 PM
Email ThisBlogThis!Share to TwitterShare to FacebookShare to Pinterest
Newer Post Older Post Home