WIP - Starting on the Rangers

Th Skitarii train keeps on chugging and I am now working on the five man squad of Rangers. 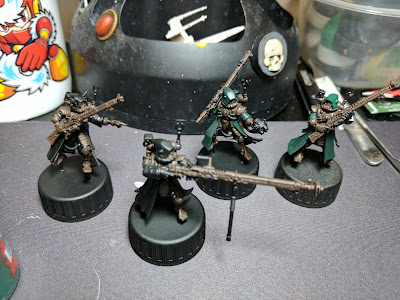 Originally, I had planned on customizing the entire squad with T'au Pathfinder legs. But after totally ruining a few of my original Ranger models, I decided against it. Leaving me with a single crouched sniper in the group. 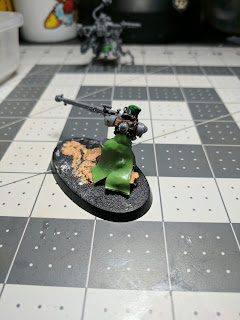 I had thought I'd ruined them completely, but I was able to salvage a squad of five out of the ones I had left and a second squad of five. This turned out to be a good thing anyway, as the new squad looks more as if they are surveying for targets.

The first order of business was to attempt a lower half of a coat on the crouched sniper, luckily I had
the always amazing Sophie to help me. She gave me a bunch of pointers and advice on how to go about sculpting a coat with green stuff.

While talking it all over, we both realized that I was without the proper tools for sculpting the coat without frustration, and she decided to lend me her tools while she was on vacation.

Since I had sculpting down time, while I waited for tools to arrive, I began painting the rest of the unit, starting with base coats for metal, coats, wood and leather. 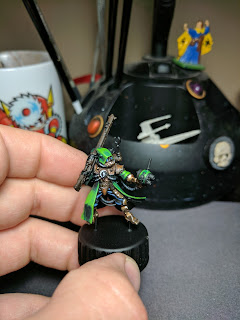 Once the base coats were dry, I went through and knocked out all of the green and copper on them in a unit, so I could then focus on one Ranger at a time.

I started with the dude carrying the Omnispex, because I liked his pose. He's still not finished yet though, as I've ended up busy over the last few days and last night the tools arrived, so I started playing with green stuff all night long.