Since Monday evening I've been working on Jon, a chameleon bard, from Panda Cult Games line of Wander miniatures.

The official artwork has him with green skin, and originally I was going to follow suit. But then I realized that chameleons can be vibrantly colored and decided to do some image searches for references.

That's when I stumbled on this image. 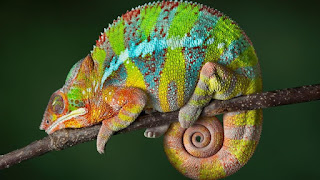 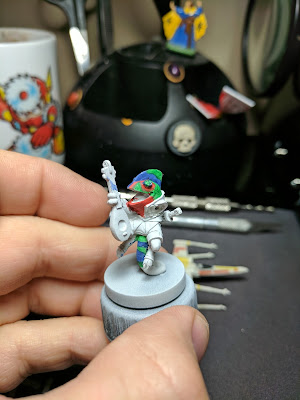 I instantly fell in love with the colors and patterns of this little guy and knew that I needed to challenge myself with it, in the same way I had with Tank's shell.

I started with the skin and blocking in colors of the pattern, as closely to the reference picture as I could.

For the base colors, I blocked in Evil Sunz Scarlet, Warpstone Glow and Caledor Sky. I had thought about using Wild Rider Red, Moot Green and Lothern Blue for the base coats. I didn't want it to be too bright in the end, so I opted for the darker base colors instead.

At this point, I was definitely worried that it was going to look like garbage... he looked a bit clownish.

I get like this sometimes, especially when I am just starting out and its something I haven't tried before. 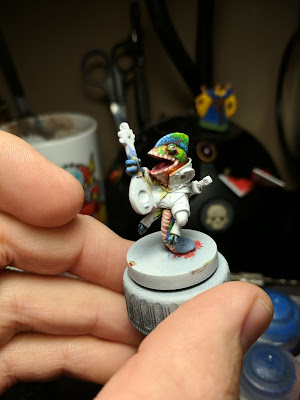 It doesn't help that I don't paint a lot of animals, so their skin patterns and making it look natural always seems daunting. Especially when it comes to fur or reptile skin patterns.

I started the skin by mixing the Warpstone Glow and Moot Green colors together and dotting the area
with different mixes. I then mixed in some Yriel Yellow to highlight it a bit more.

The red sections were painted with the same method, but with Troll Slayer Orange and Yriel Yellow. While the blue was mostly Lothern Blue and white mixed in.

The underbelly was painted with Fair Shadow from Reaper's MSP paint line and then highlighted up with Fair Skin. 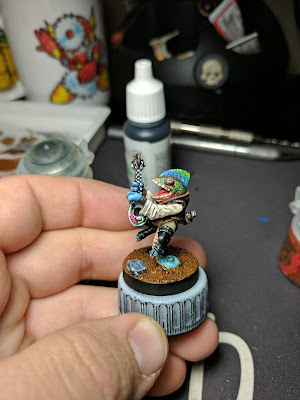 To help shade his skin, I used a few glazes of Agrax Earthshade and Athonian Camoshade. This was used along his frill, the creases in his face and along the edges of clothing to help deepen the skin tone, without messing up the surface.

With that finished, I started making scales on his skin with thinned Caliban Green and the fine tip of my #2 Raphael 8404. The #2 size brush was crucial in freehanding the scales, as the size of the brush allowed me to keep more paint loaded in it and continue working longer without having to stop and reload constantly.

I painted up all of his clothes in neutral colors, since he was so colorful already. I didn't want to over do it with the color and instead opted for Rhinox Hide on his vest, Steel Legion Drab on his pants, Rakarth Flesh for his tunic and Mournfang Brown for his belt.

Each leather section was highlighted in a similar manner, with the highest highlight being Ushbati Bone. The vest and belt were shaded with Druchii Violet, which deepend the shadowed of the leather and gave it more interest, than if I shaded it with Agrax Earthshade. 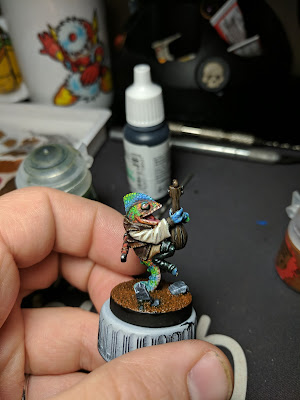 His shirt was washed with Seraphim Sepia and repainted with Rakarth Flesh. This was then highlighted with mixes of Ushbati Bone and Screaming Skull, before being given a final highlight of white.

The lute was fun. It started with a base coat of everyone's favorite brown, Rhinox Hide. I then used very thin layers of various other browns to make it look splotchy.

I then used slightly thicker streaks of Chocolate Brown, XV-88 and Ushbati Bone to give it a bit of wood grain look. Finally, I added some Rhinox Hide lines to help simulate edges of the wood planks that make up the body of the instrument.

I wanted the top of the lute to be as interesting as the rest of the character, so I decided to give him a checkered fretboard, with the tiniest checkers I've ever painted. While the face of the body was painted white and I added a little rose design to it.

The last detail is actual a bit of an Easter egg. He is using a pick to play and I went ahead and painted it the same color as the picks that I actually use to play my bass guitar. Its a small detail, but a fun little touch.

His tail was painted last and in a similar manner to the rest of his skin, but instead I mixed in some fair skin to lighten it up and make it more closely resemble the reference material. This was then scaled using the same method as the earlier skin using Caliban Green.

As of last night, I had the base almost finished. I used some slate to made rocks and painted them up. I also painted the sand with Mournfang Brown and gave it a wash of Athonian Camoshade. But, the wash was taking forever to dry, so I called it a night there and will instead finish him up tonight.

He's been a super fun little dude to paint, but that's it for now. Be sure to check my Twitter and Instagram for up to date progress and keep an eye out for Panda Cult Games' Wander: The Cult of Barnacle Bay, coming to Kickstarter in September!