The Relic of Smaerd: Fleeing the City 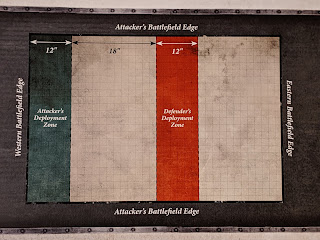 As of last week, the 82nd has obtained the Relic of Smaerd and is now on the run from the Sisters of
Battle as they try to bring it to a secure location.

This week's battle is Running Battle from the Vigilus Defiant campaign. The armies have been built to 1,000 points and are heavy on vehicles in order to capture the feel of a high speed chase through the ruins of the city of Smaerd.

In Running Battle, the models and terrain all slide down the table 6" at the start of each round, after the first. To capture the feel of moving through the city, we started putting more natural looking terrain down at the beginning of turn 3. That way it felt like they had reached the edge of town and were nearly away.

Will the Steel Legion secure the Relic? Or will Celetine's Battle Sisters seize control of it? 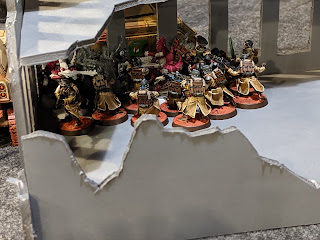 After a quick tussle the remaining members of Blue Team and Yarrick retreated from combat and embarked on my Taurox. We then made our last ditch effort to escape that god forsaken city with the remaining Chimera and the Valkyrie not far behind.

The day seemed to be lost. But then we heard the sound of a lone bike in the distance.

It was one Commander Wood's Death Riders! And he had some how regained the relic! He linked up with the remnants of our force and zipped past leaving the Sister's far behind.

We have managed to maintain control of the Relic. We are now housing it at Base 41 where we will be keeping it for the time being. Until such time that we can safely move it again, we will be keeping an eye out for potential threats in the meantime. 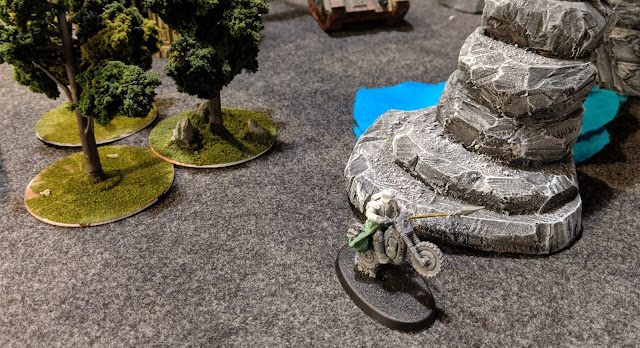