It's a very Star Wars Legion kinda time around these parts. I am deeeeep into this game at the moment and working my way through a bit of backlog of models so we can finally get the game on the table. This week I've been working on a few different character models as well as finishing up the Seperatists side of things by basing the B1 Battle Droids.

The goal is to be able to start playing the game asap and get some practice with the system, so I came possibly get some games in at Adepticon in March. I still have plans to add some Felucia style plant life to the bases as well. But I'll add that in at a later date.

But for now, let's take a look at what was accomplished this week. 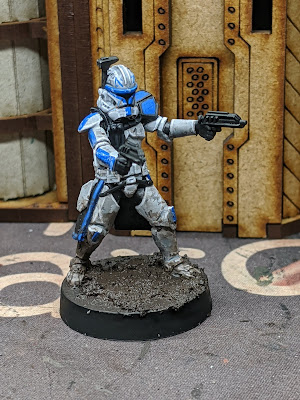 Captain of the 501st Legion of Clone Troopers, Clone Captain Rex is easily one of my favorite characters from that series and the reason I wanted to paint the other clone troopers as 501st to begin with. It also helps that I do really like Anakin Skywalker and whenever they decide to release him in game, I am so jumping on that bus as well... but anyway..

Rex's model comes with 3 head options allowing you to give him a Phase 1 helmet, his iconic modified Phase 2 helmet or bare headed. From a modeling standpoint though, the rest of his body is so obviously is late Clone War armor that I had to use the 2nd option. As I've been treating this Legion project as if I were painting historical miniatures and adhering to cosplay guides and film examples, I couldn't let myself mix the styles. 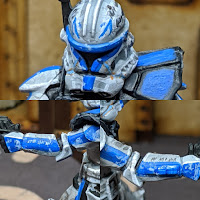 Rex's armor is packed with painted details that kind of go unnoticed at first. For example, his helmet has the blue markings that are highly visible. But I never really paid much attention the the fact that it's made of a Phase 2 and Phase 1 helmet being cut apart and welded back together, or that the light blue and orange weld lines were still visible. Or that Rex marks his kills with hash marks on both sides of the helmet and all over his arms and legs as well.

Obviously I needed to recreate all of this and oh boy those hash marks were a challenge. I'm not really pleased with the ones on his helmet, but by the time I got to his arms I had it down for the most part. It could still be better and if I were doing a display version I would probably be repainting them. But for a game piece, they work pretty well. They do get kind of lost with the rest of the weathering though. The hash marks on his shins, for example, are all but invisible now due to the mud on his legs.