Deep into MCP and New Projects!

Wow, it's been well over a year since I've posted anything on the ol' blog. Personal life and the way of the world really brought my productivity down to a screeching halt.

But now ever since I returned from Adepticon 2022, I am in full on hobby mode once again! What started as building a team of models to play games with at Adepticon has turned into an obsession with all things Marvel Crisis Protocol.

It's been a wild few months and the hobby mojo is overflowing. 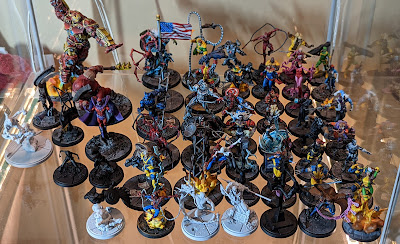 It all started with the release of the Rival Panels box set of Spider-Man and Doctor Octopus...

"I'll just buy this kit, because it's a diorama and I love Spider-Man...It'll be fiiiine." I said.

But the, friends were talking about playing the game at Adeption, which then turned into buying Miles and
Gwen to go along with Spider-Man, which in turn became a team of X-men and Deadpool to take to the convention. Followed by a Core box, because you know I needed the tools, dice and some extra cards in order to play at Adepticon...

And boy did that open up some flood gates. Here we are, almost three months later and I'm neck deep in Marvel Crisis Protocol, with over 50 models bought and painted. I've also put in a lot of effort to organize all of my cards with various dividers, which you can find PDF files of on the Resources page.

In the time since returning from Adepticon, I've also been in talks with my local game store about running a regular Crisis Protocol gaming group.

With that in mind, I've been working on building up multiple tables worth of terrain for game days and Now I'm also planning 4 gaming boards for events. It's going to be a long project, but I think it'll be worth it and I'm planning on documenting the progress on here to get things up and rolling again.

Let's take a look at some of the things I've gotten painted and built so far.

There's probably more I'm missing, but I think that's good for a first update. I did tease something earlier in this post about a four game board project, which you can see on Twitter, but I'll save that for another update at a later time. Because going over that idea will end up being a whole post all on its own.
Thanks to everyone who has helped me get things rolling so far, its very much appreciated. Until next time, you can always catch me on Twitter, I also post sporadically on Instagram. I'm very much high on Crisis Protocol at the moment and I think its going to be a good ride.
I can't wait to get things back up and running here as well.
Posted by Scott Ferguson at 12:16 AM
Email ThisBlogThis!Share to TwitterShare to FacebookShare to Pinterest
Newer Post Older Post Home