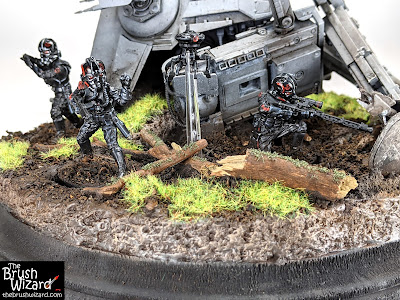 Another Christmas, another secret Christmas Project!

This time around I built a diorama of Iden Versio, Del Meeko and Gideon Hask during their mission on Endor from the video game, Star Wars Battlefront II.

The idea for this diorama came about thanks to the Endor scenario in the game, where you end up fighting an AT-ST on the way to a landing pad while escaping the forest moon.  I had originally intended to use the official fallen AT-ST scenery expansion for Star Wars Legion as the base, decided against it after looking it over and opted for a 1:48 scale Bandai kit instead.