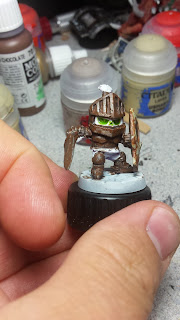 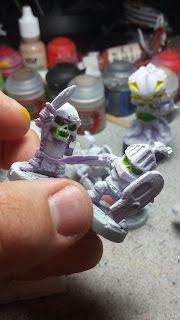 I've done rust effects before, but, it was mostly just for accents. With these guys, I wanted fully rusted metal to the point where there was hardly any silver showing at all. I think they are turning out well so far.

For the rust effects, I started out with a base coat of Vallejo Chocolate Brown. Then I drybrushed it over with GW Ironbreaker. Then using Chocolate Brown and a Red from Reaper (it's marked "sample", so I don't know the actual name). From there I began adding in more red to the mix as I layered it on. Until I then started adding in a light orange to the mix as well. 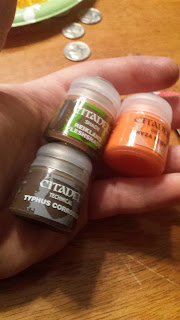 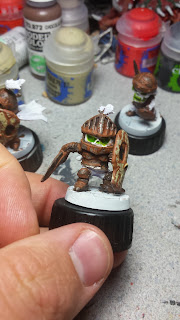 It turned out well, but something was missing. So, I ran to the hobby shop and picked up a few new paints; Typhus Corrosion and Ryza Rust along with a new wash Reikland Fleshshade.

I started with the Typhus Corrision and put it into areas that seemed logical. This stuff is basically a wash with sand mixed into it. Once it's dried it looks like a deeply pitted area in the metal. 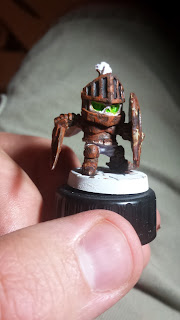 It worked out really well! I'm super pleased with the rusty armor now and I think it's time to move on to the skeleton's bones.

Of course, now I've changed my mind on the starting color of green I'll be using for the eyes too. Which means base coating them was pretty point less....