Much like my Forgotten King Wave 1 unboxing. I'm going to lay this out with pictures and captions. It makes things so much easier that way.

The Rocktop Gang is a group of turtle minions. When I was getting ready to paint them, I had the crazy idea of color matching their skin tones with my old TMNT action figures. Some ended up closer than others, but I'm pleased with them. 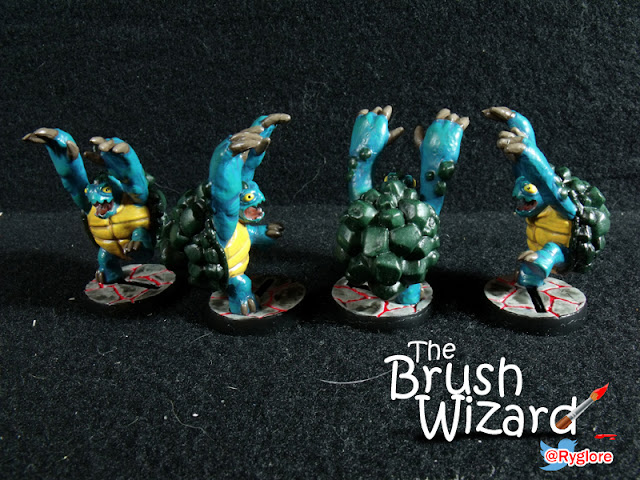 Fireflow Denizens!
The Fireflow Denizens were an interesting challenge. Painting them required a ton of patience, as I needed to batch paint the whole bunch of them for their firey areas. I do like working with red and on less stylized miniatures the fire effect is super easy to do. But on these, the softer details meant I need to cut some corners to make it work. All in all, I've so far gotten a ton of compliments on them.

The Bosses!
Caverns of Roxor comes with a mini-boss and a new boss. The mini-boss is Rockgut the Troll, apparently trolls in Crystalia aren't affected by fire the way other fantasy trolls are, because he's full on inferno mode. The new boss is Roxor, who is a large fire elemental and in original Super Dungeon Explore, he was a wreaking machine. Some folk complain about his sculpt, but I think he looks wholly badass.

That's it! Super Dungeon Explore: Caverns of Roxor is finished! It only took, like 3 years... Now I can move on to finishing my Great Cyclopean Gemstone Heist! and then paint up SDE: Von Drakk Manor. I'm really hyped for Von Drakk, mainly because I'm a huge Castlevania fan.

Also in case you're wondering, here is my technique for painting molten rocks:
And that's it!

I'm super happy to have gotten these finished and it was great having the #warmongers on Twitter pushing me along. Also I couldn't do fire as well as I do now it if wasn't for the tutorial from Hot-Lead. You should check it out, it's super in depth and he also has a bunch of other good ones over there.