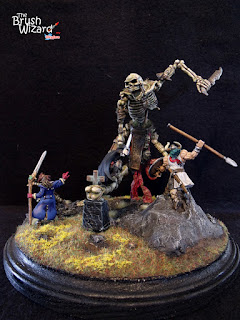 20 days after the announcement of the new Finger Painters competition, my entry is now complete! It turned out really well too, even though I couldn't get my vision to be fully realized. After playing with both steel wool and green stuff for an hour and a half, I gave up in frustration and decided to call it finished. 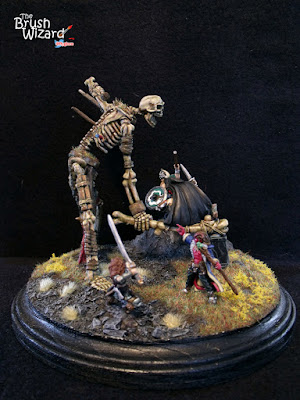 The idea sprang forth from my love of diorama crafting. I
had this large skeleton and while it would
have been perfectly fine to paint him up solo, I thought "why not add in a person fighting it?". So, I started digging through my unpainted minis drawer and remembered a few that my uncle had given me last 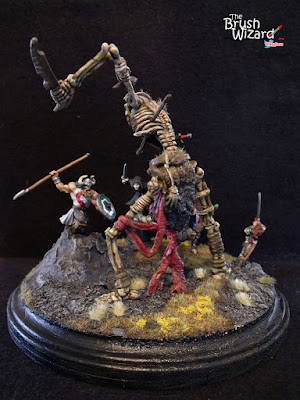 I grabbed up the Viking/Barbarian and started playing with layouts. But then I remembered the Rogue mini and had the bright idea to put him on top of the Skeleton's hammer.

I realized, while I was looking them over, that the base would be about 6" round and would have some empty space... needless to say, I ended up adding two more minis to the party. One, a half-demon mage (also from my Christmas haul) and the other, a female fighter from my Bones collection.

The party was now complete, and my entry went from one large scale mini to five minis total. All in the span of a half hour.

Originally, I thought of building a ruined wall out of my remaining bricks, to help tie in the barbarian's base. But, I couldn't find them. So I came up with the idea to hide it within a giant rock instead. With that , I decided to paint everything first and then build the base.

This proved to be a interesting challenge, as I had to build up the base with clay, while being careful not to get any on the painted minis. But I was able to pull it off. 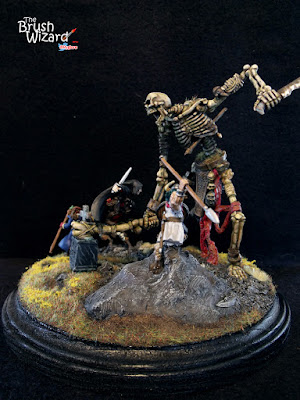 The hardest part was making the rock. Mostly, because of the way the barbarian's legs are situated on the wall he is leaping over. But a little bit of sculpting and creativity and the rock was formed. It even looks pretty decent and believable as well.

The only part of the entire project I'm sad about, is the lack of my ability to effectively create the sorcerer's lightning spell. I would have loved to have him blasting the skeleton with it. But I'm no good with green stuff and the steel wool I was using wasn't agreeing with me.

In the end, I decided to forgo the spell and call the project done, rather than totally ruin it because of my attempts to jazz it up more. I'm really pleased with this one over all, and it was a fun challenge to create it with a deadline over my head.

Now, with that out of the way, its time to get back to Super Dungeon Explore and my U-Con set. I just need to paint up the pets and the Boo Booty minis and it'll be done too. Then it's on to something new!

Now, sit back and enjoy some detail shots! 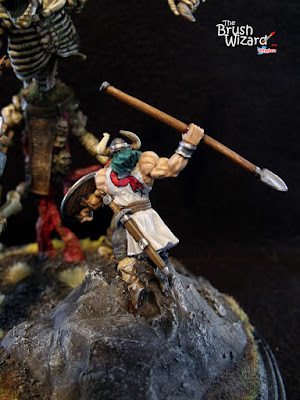 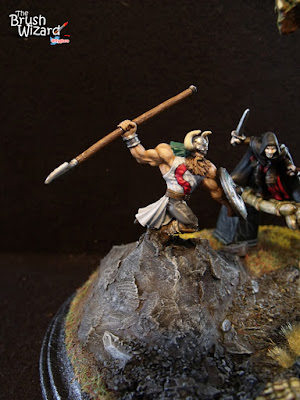 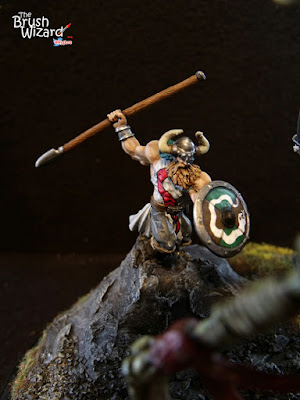 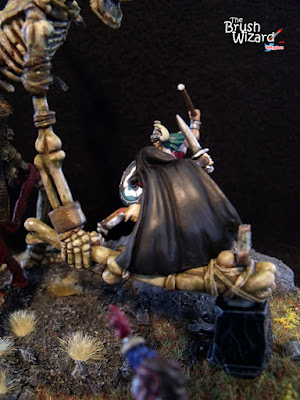 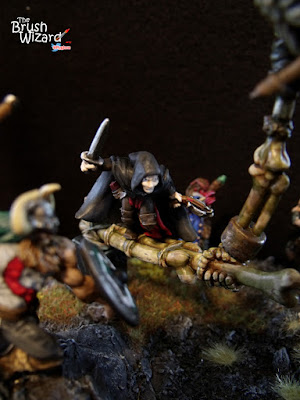 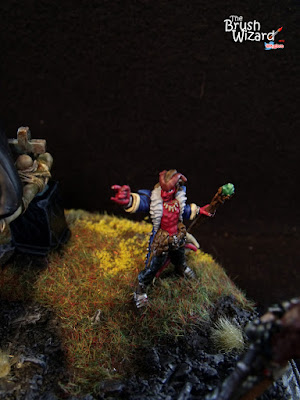 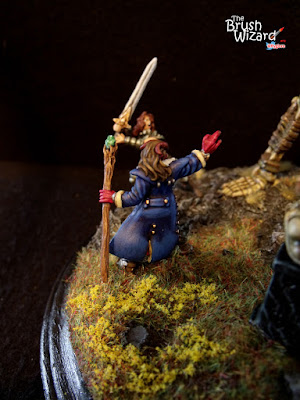 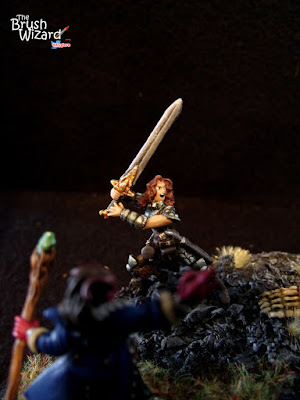 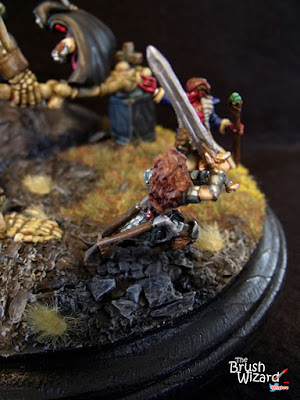 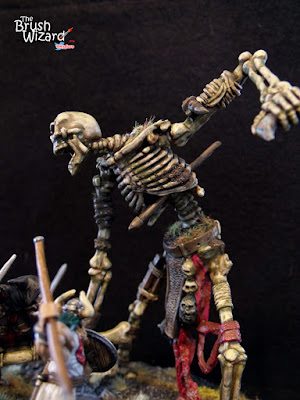 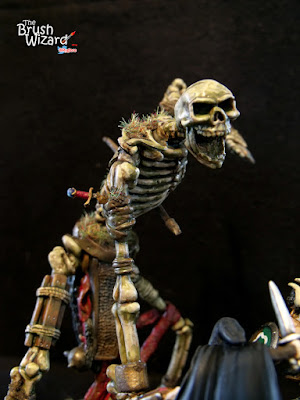 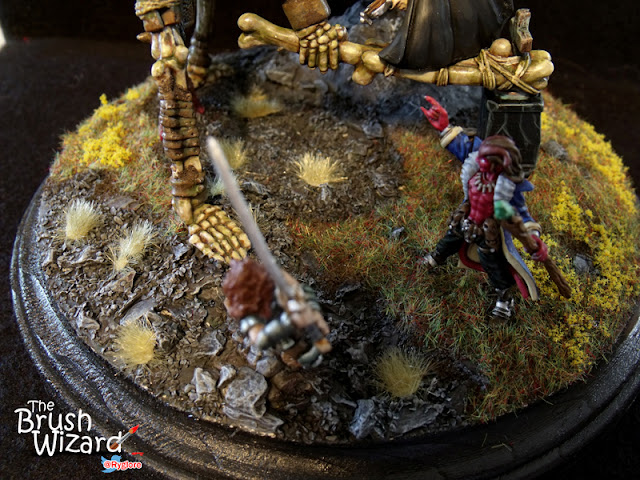 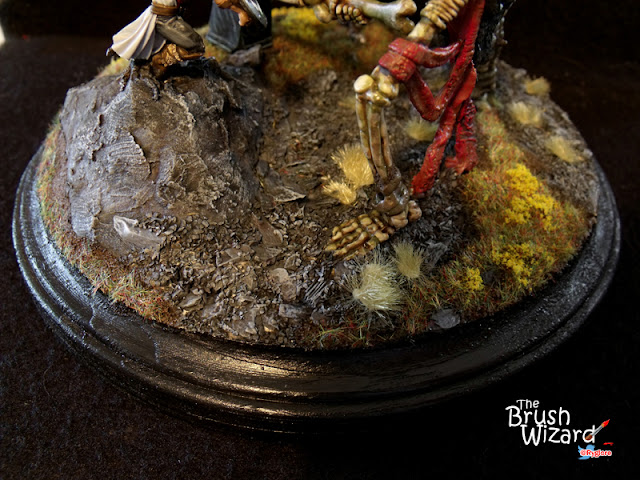