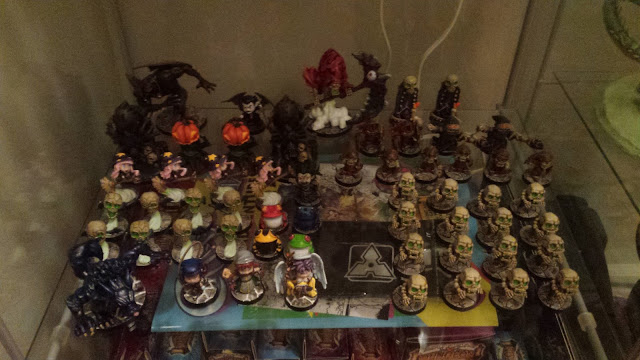 It's taken awhile (the expansion released on 4/17/13), but Super Dungeon Explore's Von Drakk Manor is now fully painted and ready for the game table! My main hold back in painting them all was due to the Forgotten King kickstarter and the need to paint the Pumpkin Patch and Rattlebones all at the same time. But now the 2nd expansion pack for SDE is finished and it's time to move on to Forgotten King loots and new projects! Hype!

The heroes of the Von Drakk Manor set are some of my favorites. Von Wilding gets a bonus vote, thanks to being based on Castlevania. But the Sister of Light also gets a big fav, thanks to her being based on one of my old D&D clerics. Plus it was really fun painting up her book, she even has the holy symbol of Kelemvor (the Forgotten Realms god of death) on the back of her tome. The Celestial Herald was also a fun challange and I learned a lot about painting white with her wings.

The Pumpkin Patch Spawning Point is made up of tricksy witches, a necromancer, skulls with bat wings and a giant spider. It's a single spawning point, but I had to wait for the Forgotten King KS to deliver, thanks to my inability to accurately mix the same colors twice. The best part of this spawner are the Dust Coven Witches, who can polymorph heroes into Miserable Toads.

The Shallow Grave Spawning Point features all of your skeleton warriors. Theres a couple champions, some standard skeleton fighters and a pair of mages. In the original release for SDE 1.0, this set also included the Rattlebones, but now they've been given a different role in SDE 2.0 and are no longer spawned from this point.

Star of my most popular post ever written for this site (ahem How to Paint Bones), the Rattlebones are new a new monster type called Creeps. They only come out from Shallow Grave tile effects or when creeps are spawned from Explore Cards.

The bosses of Von Drakk Manor have to be my favorite in the game, based on aesthetics. It goes back to Castlevania, again. Death Spectre is not only a really cool mini, but he's also kinda a dick in combat, and he's just the mini-boss. Von Drakk himself is a shapechanger, and can freely swap between his normal form and into the man-bat that is Nocturne. Some folks worry that Von Drakk is a little squishy.

Anyway, that's it! Von Drakk Manor is all finished and I'm not 3 sets down. But, I still have all of the Forgotten King stuff to paint up yet, and I'm 9 minis away from finishing the set of stuff I'll be taking to U-Con.

Once the U-Con SDE stuff is finished, I'm not sure if I'll jump right into Forgotten King or not. I'll let Lady Inspiration decide that one...