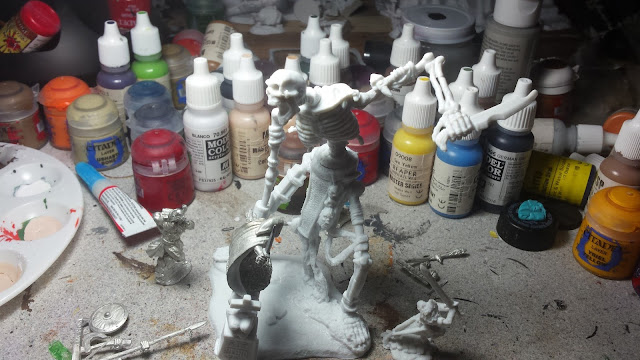 The new Finger Painters challenge has started and since it's October, that means super ghouly goodness! That gave me a reason to finally assemble and paint the Skeleton Giant from Reaper's first Bones kickstarter. But, thanks to the way my mind dreams up dioramas, I couldn't leave it at just the lone skeleton... 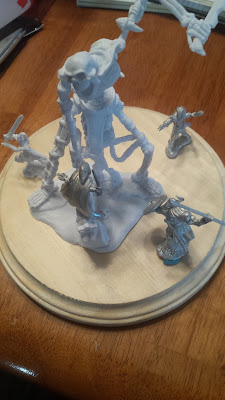 A few minutes after I decided on using the skeleton, I had the bright idea to pit him up against a hero of some kind. That idea bloomed into the idea of doing a full party, which instantly sounded like a yes. So, I began digging for minis to fight against him.

I ended up grabbing a barbarian/viking style warrior, a demonkin caster and an elven rogue that I had gotten for Christmas last year. After picking them out, I decided I needed a second fighter, so I grabbed a female with a great sword, because of her dynamic pose and with that the battle commenced.

The piece needed a base though and thanks to a quick trip to Hobby Lobby I was able to snag a 6" round plaque for $2. But this piece also lead to a minor build issue. I can't build the base, and then mount the minis. This time I need to fully paint the minis and then build the base with them

One thing I really liked about this mini was this sword that was sticking in his rib cage. But sadly, it doesn't protrude through to the inside, because of how molding works. I felt the need to fix that asap. So I hacked the sword hilt off of him and started cutting into the plastic (yay for bones being easily cut). 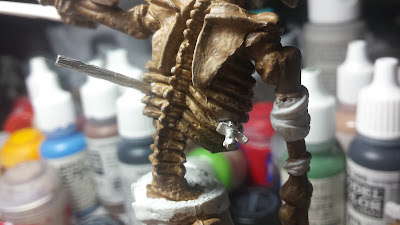 The other side of the rib cage features a hole in it where the rib was broken. I really wanted to have the sword going from one side to the other, but it just wasn't meant to be.

Luckily, thanks to a twitter suggestion, the idea to add in another impaled weapon to it's chest was born.

I then found an old lance that I had cut the end of it off and was stashed in my weapons bag. Then after cutting out the hole, I jabbed it though his chest. 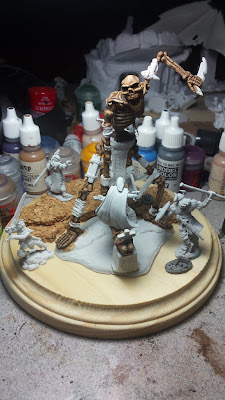 This adds a lot of character! I had to play with sword sizes though, because the two weapons were hitting each other and I wasn't a fan of that idea. But now he looks like he's seen a good share of battles.

After the weapons were added I got back to work on painting the bone and laid down a layer of Rakarth Flesh to him, following my usual steps for bone painting. Unfortunately I screwed up the next step and accidentally grabbed Agrax Earthshade instead of Seraphim Sepia... and didn't realize my mistake until after I was half finished. But, I was fine with trying it out and seeing how it dried.

Rather than start from scratch though, I decided to test something out and then added the wash of Seraphim Sepia over top of the Earthshade wash.

After letting it dry for a bit, it started to look pretty good and I'm pleased with it. Tonight, I'll be doing the Ushbati Bone steps on him and perhaps it will be a nice variant. 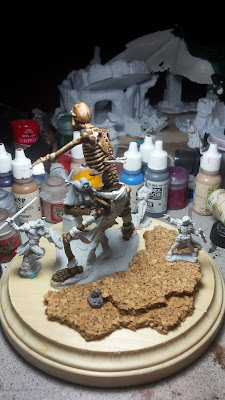 While the wash was drying, I started playing around with the base. While I can't add the clay in just yet, I
can get some preassembly going. I added in some cork and a few pieces from my Warhammer 40k basing kit and finalized the fight layout.

I also  have decided that the wizard needs to have lightning coming from his hand. I'd been planning a mini that does something similar for a while, but never found the right "victim". So thanks to some steel wool, paint and some OSL, it should maybe turn out ok.

That's it for now. I'm still working out the details for the base. I'm going to use some of my leftover bricks to help with the effect of the barbarian's wall. I might also add in a twig for a tree stump. But other than that, I'm not 100% sure on base details yet.

As always, check back later for more progress. Or you can follow this project in a more play-by-play fashion on Twitter @ryglore.